KANSAS CITY — Specific plant proteins tend to come with specific issues. Some do not contain all the essential amino acids. Others have flavor off-notes. In these instances, blending becomes a formulator’s friend.

Blending plant proteins makes sense for several reasons, said Alan Hahn, chief executive officer and co-founder of MycoTechnology, Aurora, Colo. One is to create an amino acid profile in the plant-based alternative that is similar to the profile in the conventional counterpart, like meat.

“The other reason you do it is functionality,” Mr. Hahn said. “Let’s say you needed a certain texture. Maybe a protein doesn’t gel the way you want it to gel. So you blend in a different protein.”

He gave an example of blending proteins to retain moisture in protein bars, which keeps them from getting too hard.

Cost is another reason. Premium protein may be added at a certain level with a more cost-effective protein source making up the rest of the blend, he said.

According to ADM’s Outside Voice research, 68% of flexitarians in the United States prefer a blend of two or more plant proteins in meat alternatives and 52% prefer a blend in dairy alternatives, said Jacquelyn Schuh, global marketing director, protein nutrition solutions for Chicago-based ADM.

The plant protein category has experienced recent success. Retail sales of plant-based foods in the United States increased by 27% in 2020, reaching a market value of $7 billion, according to the Plant Based Foods Association and The Good Food Institute. The use of plant-based claims for global food and beverage launches had a compound annual growth rate of 37% from 2016 to 2020, which compared to a 10% CAGR for vegan, according to Innova Market Insights, Arnhem, The Netherlands.

The 2021 Food and Health Survey from the International Food Information Council asked respondents what they were eating much more of or somewhat more of over the past 12 months. Twenty-four percent said protein from plant sources rank first and ahead of seafood at 23%, poultry/eggs at 22%, plant-based meat alternatives at 19% and other plant-based dairy alternatives at 18%.

Pea protein is being formulated into a variety of blends.

Merit Functional Foods, Winnipeg, Man., offers pea protein under the Peazazz and Peazac brand names. Puratein canola protein is a recent portfolio addition as is MeritPro, a blend of pea and canola protein. Merit in February opened a 94,000-square-foot, plant-based protein facility in Winnipeg. The plant has the flexibility to run both pea and/or canola. 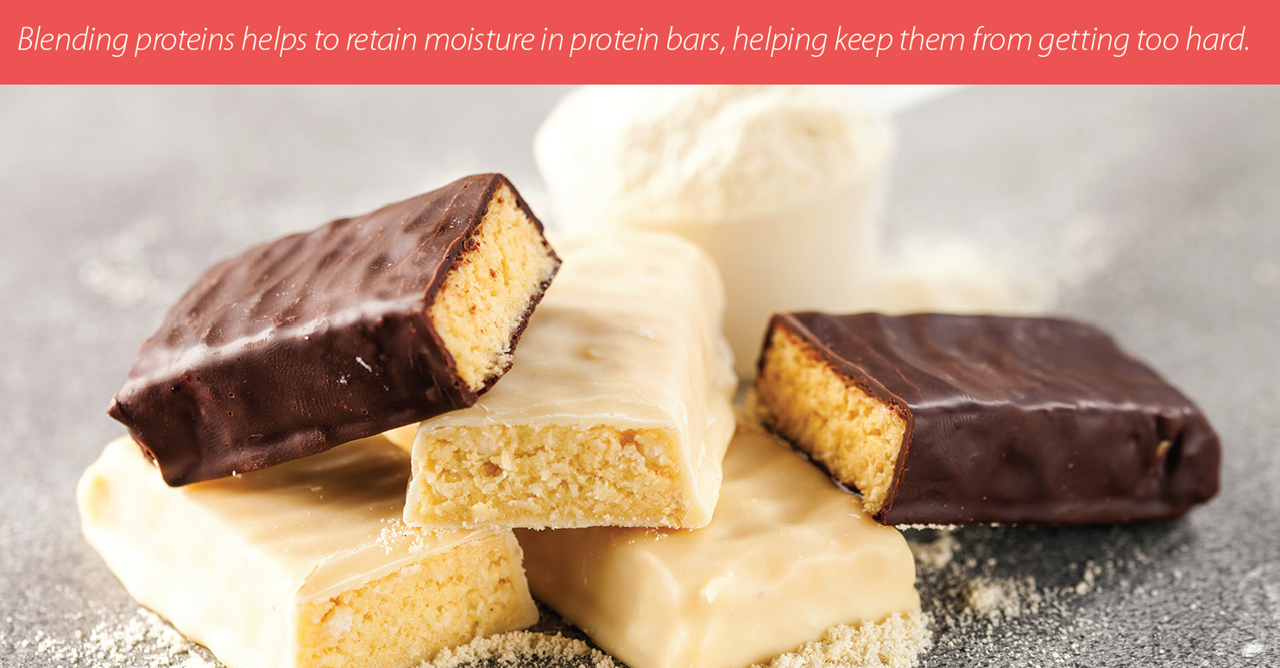 “Blending pea and canola protein is a new and compelling approach that formulators can utilize for developing products with complete protein in the plant-based space, which has traditionally been quite tricky,” said Jeff Casper, director of research and development. “A protein is considered ‘nutritionally complete’ or ‘whole’ when it contains the nine amino acids that are essential in the human diet, ideally in a ratio that matches the requirements of the body and with digestibility values that ensure those amino acids are available to the body.

“While many animal- and dairy-based protein sources are nutritionally complete, most plant-based protein ingredients struggle to attain this status, and the few combinations that can, lack desirable taste and texture.”

“Our individual pea and canola ingredients provide high digestibility and complementary amino acid profiles, which is why together, they open opportunities to boost the nutritional value of food and beverage applications even more than when used on their own,” he said.

The MeritPro customized pea and canola blend systems work in applications such as dairy alternatives, protein bars and ready-to-mix beverages. In protein bars, the blend results in softer bars and fortification levels similar to levels achieved with dairy proteins and a PDCAAS (protein digestibility-corrected amino acid score) of 1.0, according to the company.

“Both offerings have exceptional flavor profiles, but our wheat protein delivers a firmer texture and lighter color than other plant-based proteins, while our pea protein brings a more complete amino acid profile than wheat,” she said. “With specific combinations of the two, we maximize nutrition, taste, color and texture for superior plant-based meat products.”

She added ADM’s PurelyNature brand of textured and powdered pea proteins have been shown to combine with the company’s NutriStem brand of black beans and quinoa for a meaty texture in plant protein meatballs that contain 7 grams of protein per serving.

“The first thing you notice is the aroma is terrible and the taste is horrible,” he said.

Adding sugar, salt and/or fat masks the taste, but the action results in lower nutrition quality for the end product. MycoTechnology instead uses a fermentation process involving mycelium in mushrooms when creating FermentIQ, thus breaking down volatile components that cause the bad aroma and removing flavor off-notes such as astringency and bitterness.

Ardent Mills, Denver, is working on combining quinoa with chickpea protein after completing the acquisition of Hinrichs Trading Co., which is involved in chickpea sourcing, cleaning and packaging, in June.

“Chickpea protein is a good complement to quinoa protein in terms of nutritional, flavor and texture profiles, making them a powerful pair-up in food dishes,” said Angela Ichwan, senior director of research and development for the Annex by Ardent Mills. “Whole chickpeas and cooked quinoa are often found together in salads and side dishes. Chickpea and quinoa flours can be blended for pasta and baked goods, and because both are gluten-free, they provide an excellent option to satisfy gluten-free diet requirements.”

Chickpeas contain essential amino acids, including lysine and arginine, but they are deficient in the sulfur-containing amino acids methionine and cystine, which can be complemented by adding cereals to the diet, she said. Chickpea protein works in protein blends because it has a subtle flavor that does not overpower the taste profile of the finished product, she added. 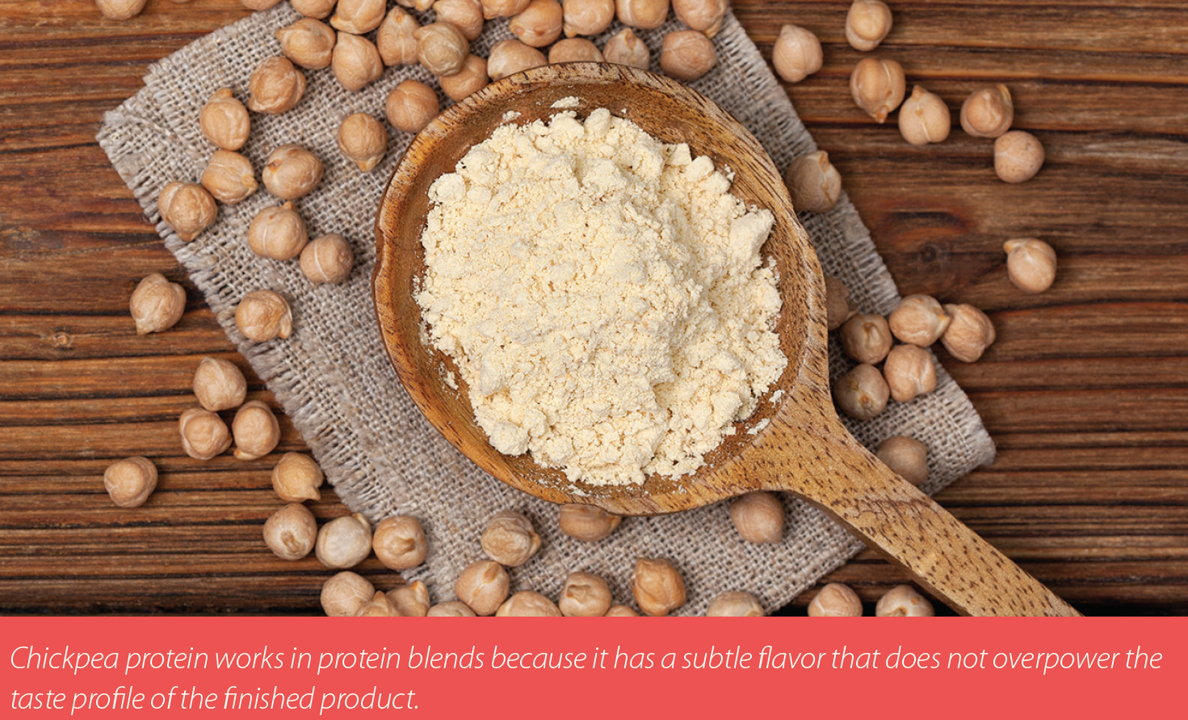 “Quinoa flour can be combined with pulse proteins to enable a nutritional boost by improving the amino acid profile of the food (providing a more complete protein),” she said. “It can be used to formulate gluten-free foods or can be added to wheat products to enhance consumer appeal.”

EverGrain Ingredients, St. Louis, offers an “upcycled” form of plant protein. The company takes “spent grains,” which are byproducts from brewing, and turns them into EverPro barley protein.

“Through independent analysis, we can validate that our full-scale facility will be producing one of the world’s most sustainable proteins when measured through GHG emissions, water and land usage,” said Pavel Hejsek, EverPro product owner.

“It is often used within a protein blend and has been shown to be compatible with other complementary proteins, including both plant-based sources and dairy sources,” she said. “In blends, almond protein powder can also serve as a flavor-masking agent, helping to offset undesirable or ‘earthy’ flavors contributed by other protein sources.”

“Sputnik is up,” he said. “There already is a cell-based product that you can buy in Singapore.”

He added, “We think in the next 12 to 18 months there will be other companies selling cell-based as well. When cell-based is available in the US I think depends just as much as on when regulatory approvals are achieved.”

Cell-based meat involves taking cells from animals, which reduces the need to raise or harvest animals, and using the cells to create meat products. The fat in these meat products tends to be better than the fat in plant-based alternatives, Mr. Walker said. Fat in meat alternatives might come from coconut oil or other forms of oil.

“They don’t retain moisture,” Mr. Walker said of the oil from plants. “They don’t stand up to cooking in the same way. They don’t provide that coating of your taste buds.”

He said fat from cell-based meat could combine with fungi-based or plant-based protein, which provides the protein and muscle tissues. The end product offers taste, aroma, caramelization and mouthfeel to the consumer.

“I get that experience, and the real driver of the experience is fat,” Mr. Walker said. “I also get that nutrition, and I also am making an affirmative statement about the environment and about the treatment of animals.”