CHICAGO — Cracker manufacturers have some work to do to reinvigorate a category that, according to Information Resources, Inc. data, seems a little stale.

In the 52 weeks ended July 11, dollar sales in the crackers category totaled $7.92 billion, down 0.2% from the same period a year ago, while unit sales, at 2.86 billion units, were down 3.4%, according to IRI, a Chicago-based market research firm.

With dollar sales of $1.67 billion, Chicago-based Mondelez International, Inc. is the largest player in the US cracker category. Year-over-year dollar sales, though, were down 1.2%, and unit sales were down 2.6%, according to IRI.

Mondelez has given little mention to its Nabisco crackers business in recent earnings calls, instead focusing on its moves to become a major player in the cakes and pastries market.

That is not to say Mondelez’s crackers business hasn’t been in the news, though. In late July, Mondelez closed a Nabisco cookies and crackers plant in Fair Lawn, NJ. Plans also are in place to shutter a plant in Atlanta. Company officials have said the decision comes as the company focuses its “US biscuit manufacturing footprint to better meet changing consumer needs and growth opportunities.”

And in June, Mondelez set up a consumer-centric supply chain transparency pilot program, the company’s first of its kind in North America, for the Triscuit brand. The program allows consumers to follow the journey of winter wheat from a cooperative of farmers’ fields in the thumb of Michigan to where Triscuits are made.

Things have been going a little better for The Kellogg Co., the nation’s second-largest cracker manufacturer. Dollar sales for the Battle Creek, Mich.-based company totaled $1.66 billion in the crackers category in the 52 weeks ended July 11, according to IRI. However, unit sales in the period were down 2.9% from the same period a year ago. 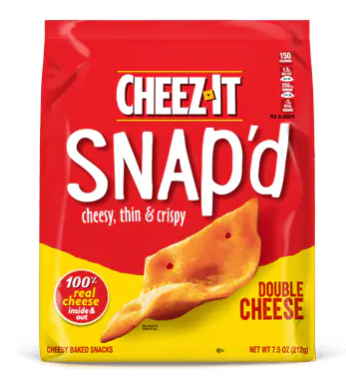 One brand that has continued to perform well for Kellogg is Cheez-It. Dollar sales for Cheez-It in the 52 weeks ended July 11 totaled $982.21 million, up 4.5% from the same period a year ago. The 4.5% gain represented the sharpest increase among the top 8 cracker brands tracked by IRI in the period.

“(Cheez-It’s) US consumption and share growth has been exceptional over the last several years, and it has continued in the first quarter,” Steven A. Cahillane, chairman, president and chief executive officer of Kellogg, said in a May 6 conference call. “The base product line continues to perform well, helped by effective advertising and sports-related activations as well as new flavors and a reformulation of the Grooves subline. Meanwhile, the Snap’d subline is providing incremental growth enough that we had to add capacity in 2020 in only its second year since launch. And Cheez-It is no longer solely a US brand. We expanded into Canada last year. And during the first quarter, it continued to grow rapidly. And in the first quarter, we brought Cheez-It to Brazil, where it’s off to a very good start. This is more than $1 billion-plus retail sales brand that continues to outpace its category in the US and one we have begun to expand internationally.”

At Campbell Soup Co., the Camden, NJ-based company continues to look for ways to innovate its Pepperidge Farm crackers business. Cracker dollar sales at Pepperidge Farm totaled $1.01 billion in the 52 weeks ended July 11, up 2.5% from the same period a year ago. The company’s base Goldfish cracker business, which is the second-largest brand according to IRI, sustained a 1.1% decline in dollar sales in the 52-week period despite a 1.5% increase in unit sales. Goldfish Colors also saw dollar sales ease in the period, falling 2.9% to $113.49 million. Flavor Blasted Goldfish, meanwhile, experienced a 10.2% surge in dollar sales, catapulting the variety into the top 10 cracker brands with sales of $203.69 million, according to IRI.

Pepperidge Farm has made attracting adults a priority with two recent innovations in the Goldfish brand. First, the company launched the Goldfish #GoForTheHandful Challenge on TikTok, a new initiative designed to attract older consumers to the cracker brand. That was followed by the launch of Goldfish Frank’s RedHot crackers, which feature the classic hot sauce as well as notes of vinegar for acidity and a blend of aged cayenne peppers.