We use cookies to provide you with a better experience. By continuing to browse the site you are agreeing to our use of cookies in accordance with our Cookie Policy.
Home » Taste becomes a positive for whole grains

KANSAS CITY — Health remains the top reason for choosing whole grains, but consumers increasingly seek whole grain products for their taste. Sprouted grains, ancient grains and whole grain menu items are some of the reasons why.

More respondents said they considered the flavor of whole grains to be a benefit (38%) rather than a barrier (33%) in this year’s whole grains survey from the Oldways Whole Grains Council, Boston. In the 2018 survey, 42% said taste was a barrier.

“As more chefs, food bloggers and cookbooks have introduced their audience to whole grains over the past several years, more diners have begun to appreciate the diverse flavors and textures that whole grains can add to a recipe without thinking of them exclusively in terms of health,” said Kelly Toups, director of nutrition for the Whole Grains Council.

In the survey 28% said they had eaten products made with sprouted grains while 29% said they had not and 42% said they did not know what sprouted grains were. When asked why they choose sprouted grains, 58% said flavor and taste, which came in ahead of digestibility at 44%, bioavailability of nutrients at 41% and reduced anti-nutrients/phytates at 26%. Humans do not have enzymes that can break down phytates, which means the nutrients cannot be absorbed into the body, according to WebMD. 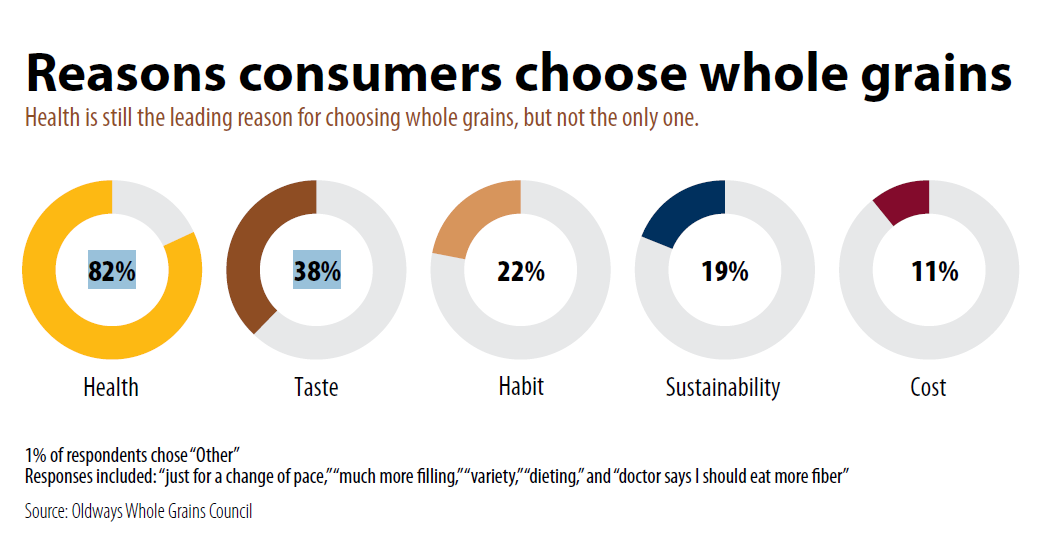 Bay State Milling Co., Quincy, Mass., offers sprouted grains under the BeneGrain brand. The grains have less bitterness, better nutrient bioavailability and work in applications such as bread, tortillas, cereal, pasta and snacks, according to the company.

When asked about specific ancient grains, nearly 70% of the survey respondents said they had heard about quinoa and about 45% said they had eaten quinoa. Ardent Mills, Denver, offers a gluten-free, one-to-one all-purpose flour made with whole grain sorghum and whole grain quinoa flour, said Laurie Scanlin, R&D director. Quinoa enhances the texture, browning and flavor of baked foods, she said. It also is gluten-free.

“Buckwheat is another ancient grain that can be used in pastry crusts, cookies, crackers and breads,” Ms. Scanlin said. “It adds diversity of taste, texture and appearance to baked goods. Its mild nutty flavor adds a hearty and distinctive flavor to pancakes and waffles.”

“Since 2018, almost 1,500 new products have been approved to use the Whole Grain Stamp — more than 750 of them sold in the US — indicating that food makers are continuing to develop new and delicious whole grain products to entice consumers,” Ms. Toups said.

In the 2021 Food & Health Survey from the International Food Information Council, Washington, more than 50% of respondents said they were trying to consume whole grains, which came in behind protein at over 60% and fiber and vitamin D, both at about 50%.

“The first plant-based meat substitutes were formulated with soy-based proteins, but as the demand increases, we see more opportunities to experiment with new ingredients to refine those formulations,” Ms. Morgan said. “Quinoa is one whole grain that has the potential to become a breakout ingredient for plant-based meat substitutes. In addition to its nutritional value, quinoa is an exceptional option for plant-based applications because many varieties can promote water conservation and soil biodiversity.

“Other ancient grains, including millet, are already being combined with vegetables like sweet potatoes and leafy greens in products like veggie burgers. We expect food manufacturers to continue to experiment with innovative ingredient combinations that include whole grains, ancient grains and pulses such as chickpea for plant-based meat alternatives.”