KANSAS CITY — Count flatbread as a way to appeal to various global cuisines. Specific flatbreads are popular in the Mediterranean, Europe, India and other parts of Asia. All come with their own ingredients and processing conditions.

“Every country has their own version of flatbreads,” said Tom Mitchell, lab director for Brolite Products, Bartlett, Ill. “Pizza, pita, tortillas, roti, lavash, chapati and naan are just a few of them gaining popularity in North America. The most common trait among all of these is the higher baking temperature compared to traditional bread.”

US retail sales of pita bread hit $131 million in the 52-week period ended July 11, which was up nearly 9% when compared with the previous 52-week period, according to Information Resources, Inc., a Chicago-based market research firm.

Pita bread became more popular in the United States in the 1960s when Harry Toufayan began selling it on the East Coast. His father had been a baker in Cairo, Egypt. Harry Toufayan was inducted into the American Society of Baking’s Baking Hall of Fame earlier this year after Toufayan Bakeries became a leading producer of flatbreads, pitas, bagels and other specialty baked foods nationally.

“Pita dough sheets, when baked, puff into a balloon due to thermal expansion of gases such as carbon dioxide developed during fermentation, dough humidity and air entrapped during kneading,” she said. “After baking, the balloon deflates due to cooling, giving a soft and flexible bread, with a characteristic inner cavity also called ‘pocket’ that can be stuffed with meat and/or vegetables. It is lean in formulation.”

Naan bread originally is from western Asia and the Indian subcontinent, said Ricardo Rodriguez, technical sales manager for Lesaffre, which has a US office in Milwaukee. The dough contains flour, yeast, salt, sugar, yogurt and ghee (clarified butter). Naan, which is softer and sweeter than pita bread, has dime- to nickel-sized golden brown blisters on its surface, he said.

“The dough pieces are rolled and baked in a very hot oven,” Mr. Rodriguez said. “Although traditionally they may contain fillings such as spices, dried fruits or nuts, in the US it is available either plain or whole wheat sometimes with savory toppings in grocery stores.” 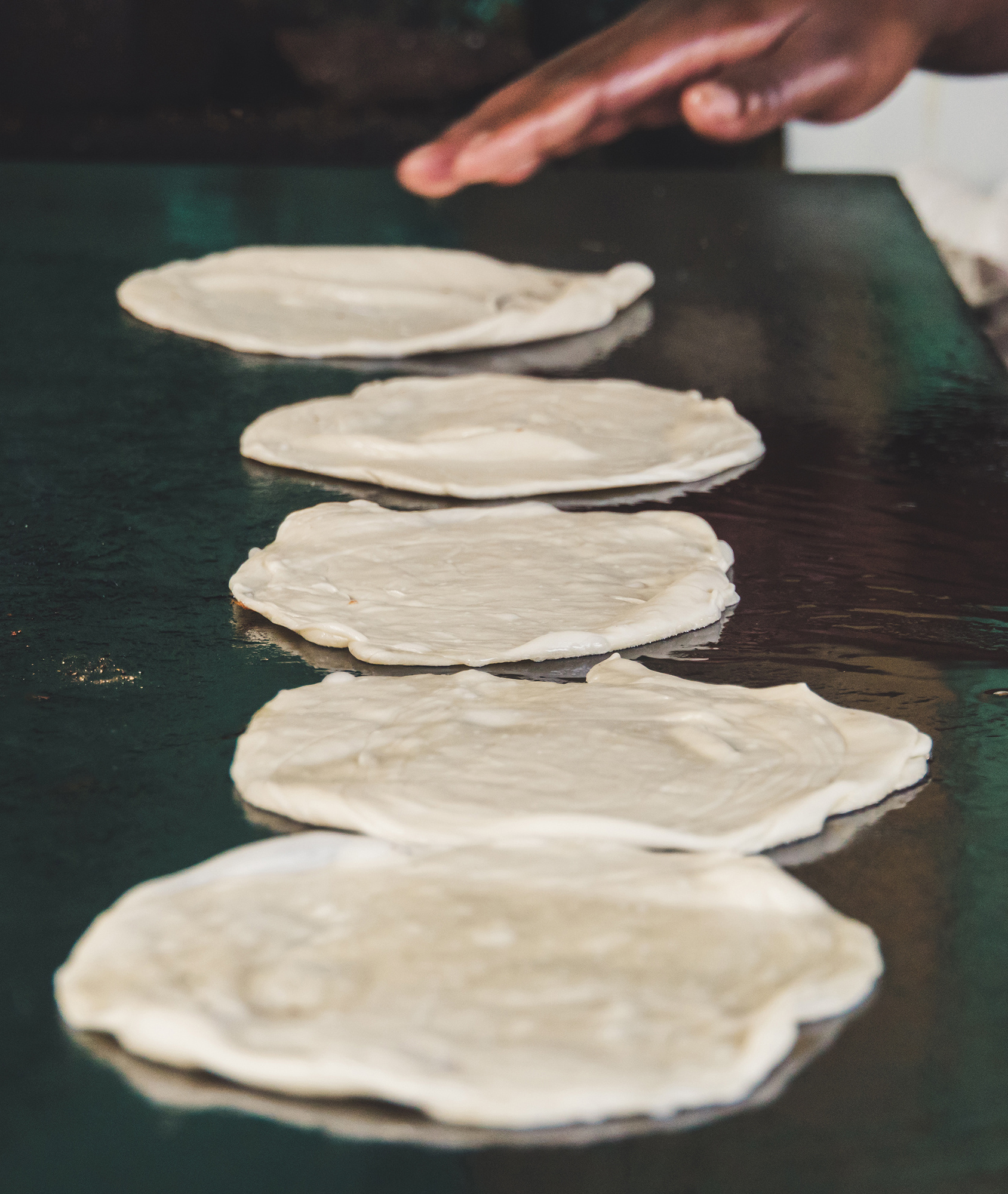 Piadina comes from the Emilia-Romagna region in northern Italy, Mr. Rodriguez said. It contains white flour, lard or olive oil, salt, yeast, and water or milk. Similar to a tortilla, it is round and thin. Some varieties are deep fried instead of baked.

“The dough was traditionally baked on a terracotta dish although nowadays it is done on flat pans or electric griddles,” he said.

Alphamalt flatbread crumb works in Turkish pide and various types of tandoori bread. The improver stabilizes the dough during fermentation and baking. It gives a fluffy dough, more volume and better browning. The finished bread is softer and easier to break without being too dry. Alphamalt Fresh FB, a family of improvers, may be used for double-layered flatbreads like pita and Egyptian baladi, providing longer freshness and softer bread that may be folded or rolled.

Alphamalt Parotha was developed for parotha, a flatbread common in India that is kneaded by hand and pan-baked. The improver makes the dough less sticky so it rolls out better. Alphamalt Parotha also preserves freshness in the finished product.

Bakers should remember all traditional flatbreads are designed to be consumed almost immediately after they are made, Mr. Rodriguez said.

“If they’re being commercialized for grocery store and/or foodservice, it may be necessary to incorporate ESL enzymes and/or mold inhibitors,” he said.

Most traditional flatbreads are made with wheat, whole wheat flour or a combination of both.

“Although consumers may find multigrain versions of naan or containing savory inclusions like garlic, sundried tomato and onions, for the most part these are not considered traditional versions,” he said.

“Leavening systems vary from yeast (pita, barbari) to chemical leavenings (naan) or no leavening (roti),” she said. “After a short resting time, proofing is done to make the dough light and fluffy, which helps in retaining moisture. Most of the flatbreads such as naan and barbari are very thick, chewy, flavorful and soft. When opened, there is a well-defined structure with air cells that can be seen. They are thick, and often the surface is brushed or glazed with butter, topped with sesame seeds or onion seeds or garlic.”

Bakers also should know the type of equipment needed to produce specific types of flatbread.

“Most flatbreads are produced by sheeting the individual dough pieces or sheeting and then using a die or cutters depending on the desired final shape, which can be round, square or rectangular,” Mr. Rodriguez said. “There are some flatbreads that are produced using a hot press, similar to flour tortilla production.”

Even before the first bite, consumers’ perceptions of tortillas of other flatbreads may turn negative. Frustration may arise when soft tortillas stick together in a package or when harder flatbreads crack or break. Food manufacturers may avoid these unwanted outcomes through proper packaging and ingredient selection.

After production, flatbreads like tortillas typically are packaged with 4 to 10 per package, said Anita Srivastava, PhD, senior technical services manager, bakery for Kemin Industries, Inc., Des Moines, Iowa. Each package is stacked and stored in a box or bag. Then each box is stacked and shipped to warehouses or retail stores.

“This packaging and stacking results in the building up of pressure on individual tortillas and results in sticking or zippering,” she said. “In addition to pressure there are other factors that cause stickiness such as ingredients, processing parameters and formulation. If moisture is high or sugar is high, there is a higher chance of stickiness.”

Several strategies may help minimize stickiness. Avoid packing the flatbread right after baking when the temperature is above 180° F, Dr. Srivastava said.

“All packaging is recommended to be done at temperatures at or below 85° to 90° F so that water condensation can be avoided in the package,” she said. “Otherwise, this becomes the sweet spot of sticking.”

Ingredients such as guar gum and mono- and diglycerides have been shown to reduce the surface tension/energy, which helps to reduce sticking.

“Surface energy (also known as wettability) is a relative measure of the energy at the surface of a material,” Dr. Srivastava said. “Low surface energy results in poor wetting because the liquid cannot form strong bonds with the surface. Flatbreads with a low surface energy will result in less sticking.” 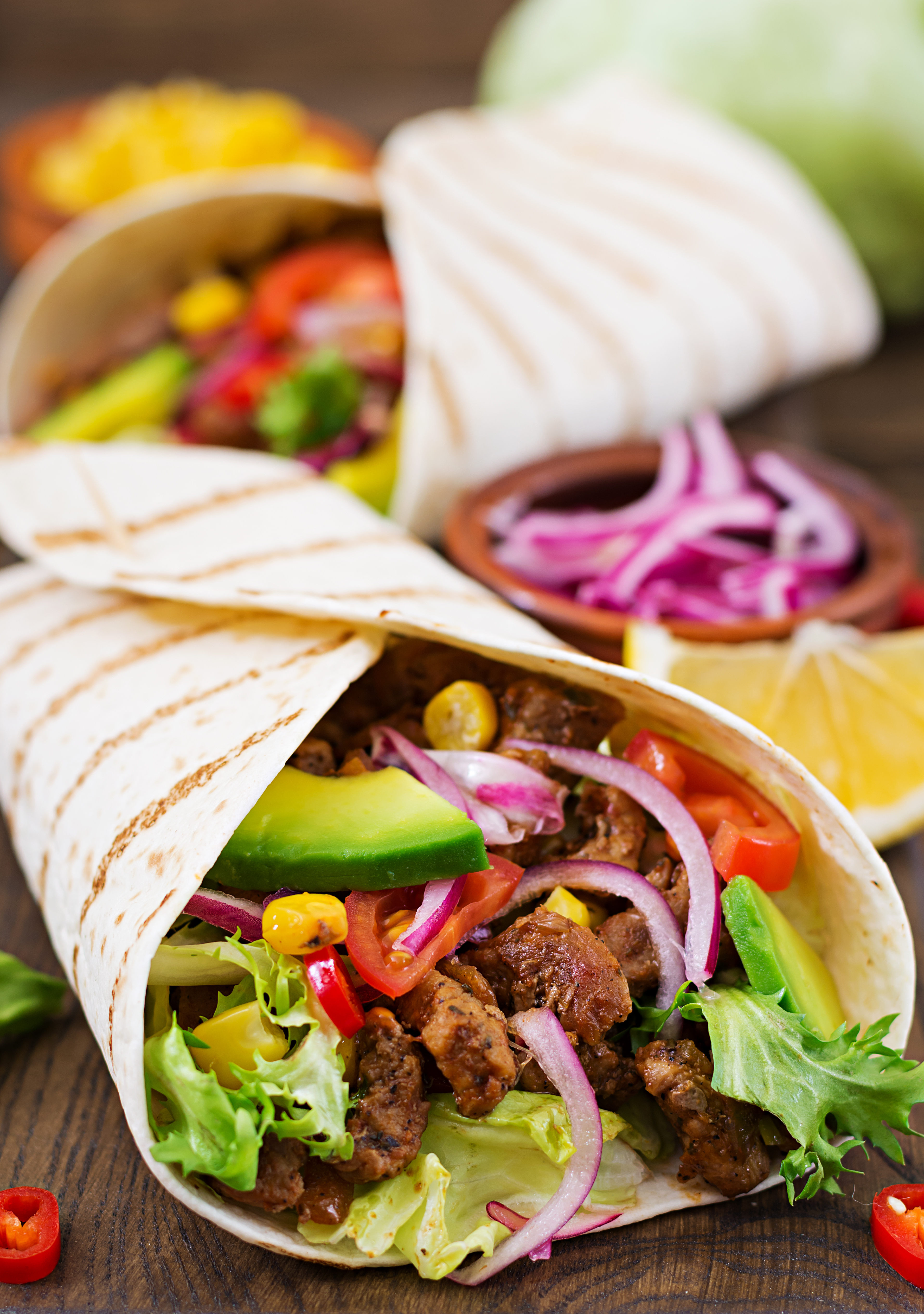 The rate of moisture migration and water activity is a main factor in the stickiness of tortillas, according to Lallemand Baking, a business of Montreal-based Lallemand, Inc. Enzymes capable of breaking down starch may be used in combination with emulsifiers to help slow moisture migration and reduce stickiness. Amylase enzymes with high thermostability, including bacterial amylase or maltotetraose-forming enzyme, have been shown to improve rollability during shelf life. However, they also may make the flatbread gummy and stick together. Tortilla makers, to prevent the side effects, could use a thermostable maltogenic amylase with exoactivity that has a limited starch degrading effect when compared to bacterial amylase. Amylase with exoactivity refers to enzymatic activity that results in the cutting of the amylopectin branches, preventing them from recoiling, recrystallizing and causing bread to stale, according to Lallemand Baking.

Certain specialty emulsifiers have been shown to reduce or eliminate sticking in flour tortillas once they are packaged, said Ricardo Rodriguez, technical service manager for Lesaffre, which has a US office in Milwaukee. Extended-shelf-life (ESL) enzymes, gums and certain fibers help improve pliability of flatbreads, he added, but excessive use of ESL enzymes, especially mold inhibitors, will impact ingredient costs and the flavor of the finished product.

“When it comes to finished product, cardboard inserts can be used in the packaging boxes thus limiting the weight being placed on the bottom packages,” said Tom Mitchell, lab director. “Less compression on the bottom flatbreads lead to less sticking.”

Cut down on cracking

A few hours after baking, flatbreads begin to show signs of staling, which may lead to cracking or tearing, Dr. Srivastava said. Enzymes, hydrocolloids and glycerol frequently are used to inhibit or minimize staling, she said.

Starch-modifying enzymes such as maltogenic amylase, when used in combination with lipase, may break down amylopectin branched starch from the ends, preventing it from firming while reducing cracking, according to Lallemand Baking.

‘’Enzyme solutions containing maltogenic amylases can be used to slow down the rate of firming during storage, which leads to cracking and tearing,” said Luc Casavant, application director for Lallemand Baking Solutions. “Thanks to its greater thermostablility and exoaction, this enzyme can modify starch (especially amylopectin) during its gelatinization at baking step.’’

In addition to resisting tortillas that stick or crack, food manufacturers don’t want them to come with high production costs.

“Using the proper mold inhibitors and the correct softeners are great ways to save money,” Mr. Casavant said. “Different ingredients work better at a certain pH. Using the wrong ones can give mixed and inconsistent results.”

Reducing mix time and the quantity of reworks also cuts down on production costs, according to Lallemand Baking. Proper mixing time will reduce dough elasticity and stickiness. When the gluten network is developed properly, the dough will not shrink and snap back during pressing or sheeting, which results in an increased production rate and less reworking of the dough.