We use cookies to provide you with a better experience. By continuing to browse the site you are agreeing to our use of cookies in accordance with our Cookie Policy.
Home » Experiment with flavors to bolster snack sales

CHARLOTTE, NC. — Forty-three percent of consumers say they look for new flavors all of the time or most of the time while about 41% do so occasionally, according to Mintel research.

As a result, companies should rely on flavor experimentation to fuel the sales and consumption of all types of snacks, said Lynn Dornblaser, director of innovation and insight for Mintel, during a presentation at SNAXPO21, held Aug. 22-24

In general, Ms. Dornblaser said, the sense of adventure is correlated with age to some degree. Those under age 45 are most likely to seek out new flavors all of the time while consumers 55 and older are less likely to try something different.

“When it comes to flavors and experimentation, it’s younger consumers, including Gen Z, of which the oldest is 26 this year, and younger millennials,” she said. “Those are the ones who want to play around with flavors the most so they can be a key target market for you.”

Overall, the top flavors such as cheddar, salted, barbecue, garlic and ranch come as no surprise, but older consumers lean toward onion-flavored snacks while Gen Z tend to prefer peanut butter the most. 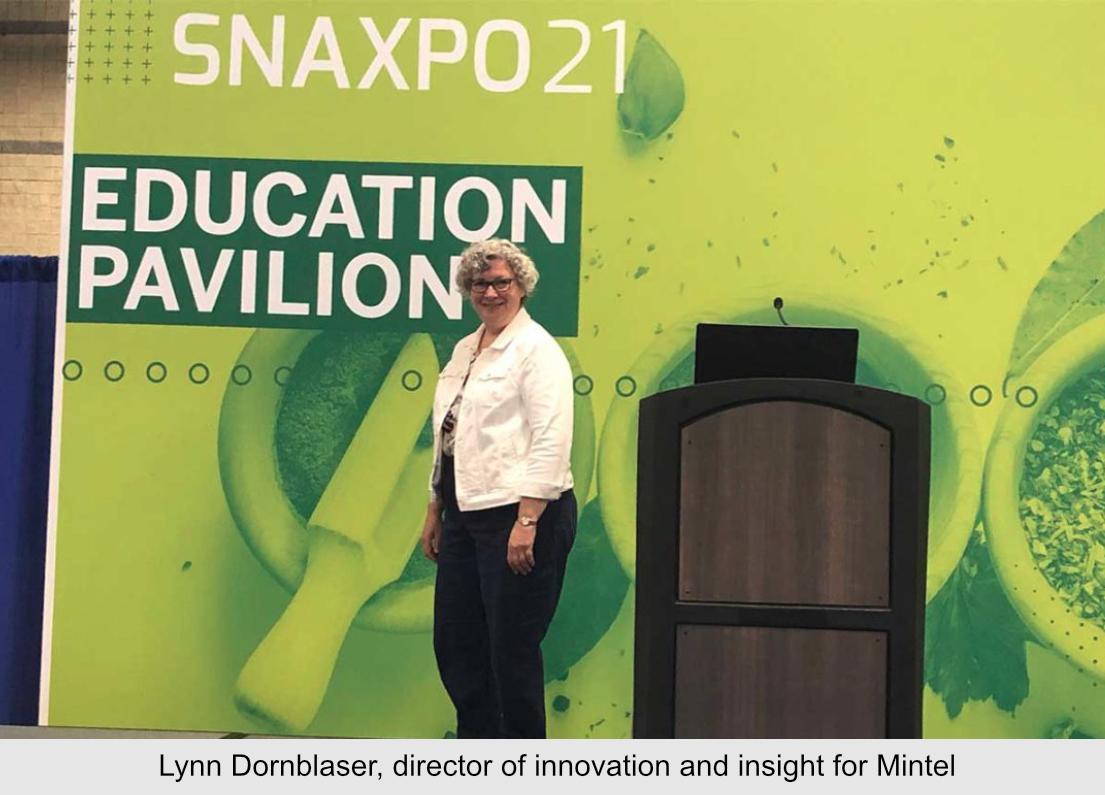 “That could be a holdover from being a kid and eating an awful lot of peanut butter,” Ms. Dornblaser said.

In its research, Mintel looked at flavors that are more common in other food categories that could provide a point of differentiation for salted snack producers, possibly in a test market or as a limited-time offering. Some less common flavors that could be used in snacks include coffee, coconut, chipotle, salami, pomegranate, mushroom and beer.

“They’re flavors or product types that consumers are familiar with, but not completely familiar with in salty snacks,” Ms. Dornblaser said.

When it comes to experimenting with flavors, she added, snack manufacturers should pair an unusual flavor, such as maca, kimchi, goji berry or guajillo chili, with a familiar format, such potato or tortilla chips.

Or instead of using potatoes to create a chip, producers might try an unusual base ingredient, such as seaweed or dried portobello mushrooms, and marry it with cheddar, barbecue or another popular flavor.

“If you’re going to experiment with base ingredients, start with flavor profiles that everyone knows,” Ms. Dornblaser said.

Over the years, some of the alternative bases that have become accepted by consumers include cauliflower, chickpeas, plantains, beets, sweet potatoes and black beans.

In addition to providing a point of differentiation, these bases may be considered more healthful because of the vitamins or minerals they contain.

Ms. Dornblaser suggested that snack makers should be careful when naming a product as well. A cayenne vinegar and pepper snack, for instance, should be spicy and hot enough to live up to its name or consumers might be disappointed when they try it.

Mintel’s research also shows that consumers understand that they eat a mix of snacks that are healthy and unhealthy, although millennials and Gen Z snackers claim they are more likely to eat healthy snacks most of the time.

“I bet some of the sales data that you have might run counter to that just a bit, but nevertheless, that’s what consumers say,” she said. “They eat what they consider healthy and unhealthy, and they recognize some snacks are better for them than other snacks might be.”

Afternoon snacking is the most popular followed by evening and late-night munching. Ms. Dornblaser suggested that manufacturers should also target these most popular eating occasions with merchandising and packaging to maximize snack consumption as a whole.