We use cookies to provide you with a better experience. By continuing to browse the site you are agreeing to our use of cookies in accordance with our Cookie Policy.
Home » PepsiCo seeks to slash plastic waste

“PepsiCo envisions a world where plastics never become waste,” he said. “Our philosophy is we want to give plastic an alternative end of life.”

There are many ways PepsiCo is approaching that goal, whether that’s package reconfigurations, new materials or even systemic changes in approaches to recycling.

PepsiCo’s strategy focuses on three principles: reduce, recycle and reinvent. Reducing the size of the packaging itself is one way the company can save not only on plastic but on money and improve consumer perspective.

“One of the biggest complaints about our bags is all the headspace, and we know that’s caused by product settling,” Mr. Fayne explained. “We’re working on how to improve settling on the product early on and improving those metrics.”

PepsiCo’s investment in recycling programs looks to systemic changes that need to be made in order to optimize the impact of recyclability. Much of this work is focused on Europe and includes the newest technologies and strategies to identify and sort plastic waste. 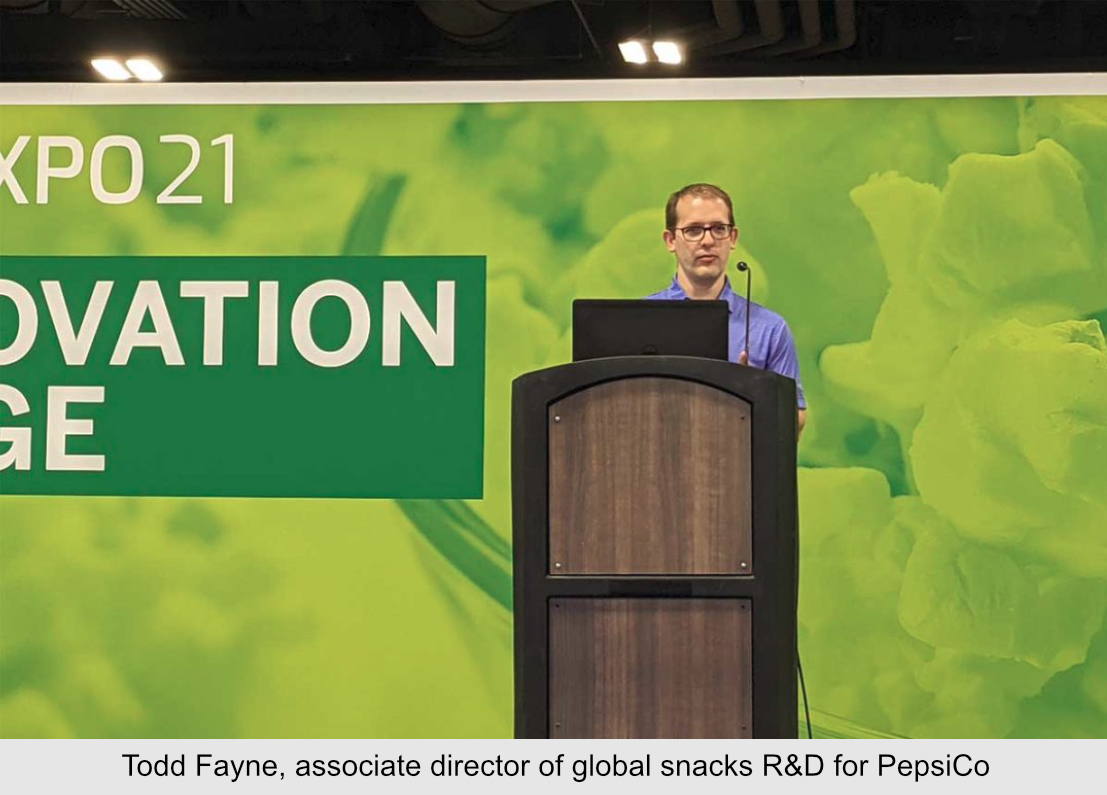 This requires working with local governments, regulatory authorities, food manufacturers and the Association of Plastics Recycling to drive collection and manage the waste. Mr. Fayne also explained that Europe is moving toward chemical recycling: breaking down the packaging to its components to become virgin resin that can be reused.

“We support this because we realize there isn’t going to be one system that works globally,” he said. “We’re going to have to have multiple types of strategies to combat this.”

These new technologies and systems, however, require some changes to the packaging itself. For example, bags need to be either fully polyethylene or fully polypropylene, so PepsiCo has responded by removing as much polyethylene from its packaging as possible.

“We’ve been able to go to greater than 90% and, in some cases, greater than 95% polypropylene,” he said. “That allows the recyclers to have a more pure starting point rather than mixed plastics.”

Mr. Fayne also spoke about digital water-marking that can identify the material packaging is made of for the vision system that’s sorting recyclable materials. And then there’s the exciting prospect of how artificial intelligence can improve sortation systems.

“I think what’s happening in this area is going to be one of those breakthroughs we need in terms of film waste,” he said. “You’re able to teach these computers, and they’re able to identify which bags are which material even with a small amount of it.”

In North America, PepsiCo has chosen to focus on investing in compostable packaging for several reasons. While not many Americans are composting food waste, PepsiCo sees this as a valuable pursuit for two main reasons. First is the issue of litter. While all litter is bad for the environment — whether in the ocean or on land — branded litter hurts the company’s image.

“If there is litter on the beach or at the park and it’s a Doritos or Cheetos bag, which it probably will be one of ours, that’s not a good brand image,” Mr. Fayne explained.

While the company doesn’t want its packages to wind up in the landfill, parks or ocean, the hard reality is that at least some of it will. By investing in compostable packaging, PepsiCo ensures it won’t last.

Second, PepsiCo does see compostable packaging becoming more common in the future and one of the many strategies companies will pursue and consumers will accept in regard to single-use packaging.

In that effort, PepsiCo is focusing on polyhydroxyalkanoate (PHA) rather than polyactic acid (PLA) packaging. One of the major challenges, however, with compostable packaging is communicating and educating consumers. It’s complicated to make a claim of how long the packaging will last in the environment, Mr. Fayne explained, because temperature, humidity and soil will all have an impact on that timeline. That makes it easy for consumers and watch groups to call out CPG companies who pursue compostable packaging on not fulfilling their commitments.

“The communication aspect of this is something that hasn’t been completely figured out,” he said. “It’s something, as an industry, we’re struggling with: how to not only market it correctly but also educate both consumers and government on how these polymers will work.”

As technology improves and snack manufacturers introduce packaging alternatives, consumer education will be another aspect they will have to address.