We use cookies to provide you with a better experience. By continuing to browse the site you are agreeing to our use of cookies in accordance with our Cookie Policy.
Home » Tropical flavors provide ‘approachable adventure’ to consumers

KANSAS CITY — Fruit flavors, ranging from the traditional watermelon to the more exotic jackfruit, are crossing categories, playing a role in confectionery, beverages and more. Consumers associating citrus with immunity is impacting the flavor category further.

“Tropical fruits tend to represent ‘approachable adventure’ for most consumers,” said Doug Resh, director, commercial marketing for T. Hasegawa USA, Cerritos, Calif. “These flavors are familiar to consumers and can more easily translate from one food/beverage category to the next. In fact, the success of tropical fruits in categories like confections and desserts can accurately predict their success in other food and beverage categories.

“In a category based primarily on enjoyment and pleasure, consumers tend to be slightly more risk averse when trying a new dessert or candy flavor, so watching adjacent categories for flavor growth can indicate potential for flavor success in the near term.”

Tropical fruits like mango, coconut, pineapple and guava primarily have been used in beverages, including soft drinks, teas and sports/energy beverages, but the flavors are becoming more popular in sweet products, Mr. Resh said. He referenced data from Mintel’s Global New Products Database (GNPD) that revealed new dessert and candy innovation featuring tropical flavors grew by 156% from 2016 to 2020.

Innova Market Insights, Arnhem, The Netherlands, listed immunity as one of its top five flavor trends for 2021. Food and beverage launches featuring both citrus flavor and an immune health claim registered a 15% compound annual growth rate from 2017 to 2020, according to Innova. The top citrus flavors in new launches with an immune health claim were orange at 39%, lemon at 29% and lime at 9%. The leading categories with immune health positioning and citrus flavor from 2017 to 2021 year to date were sports powders at 27%, juices and nectars at 16%, tea at 7% and bottled water – flavored at 6%. 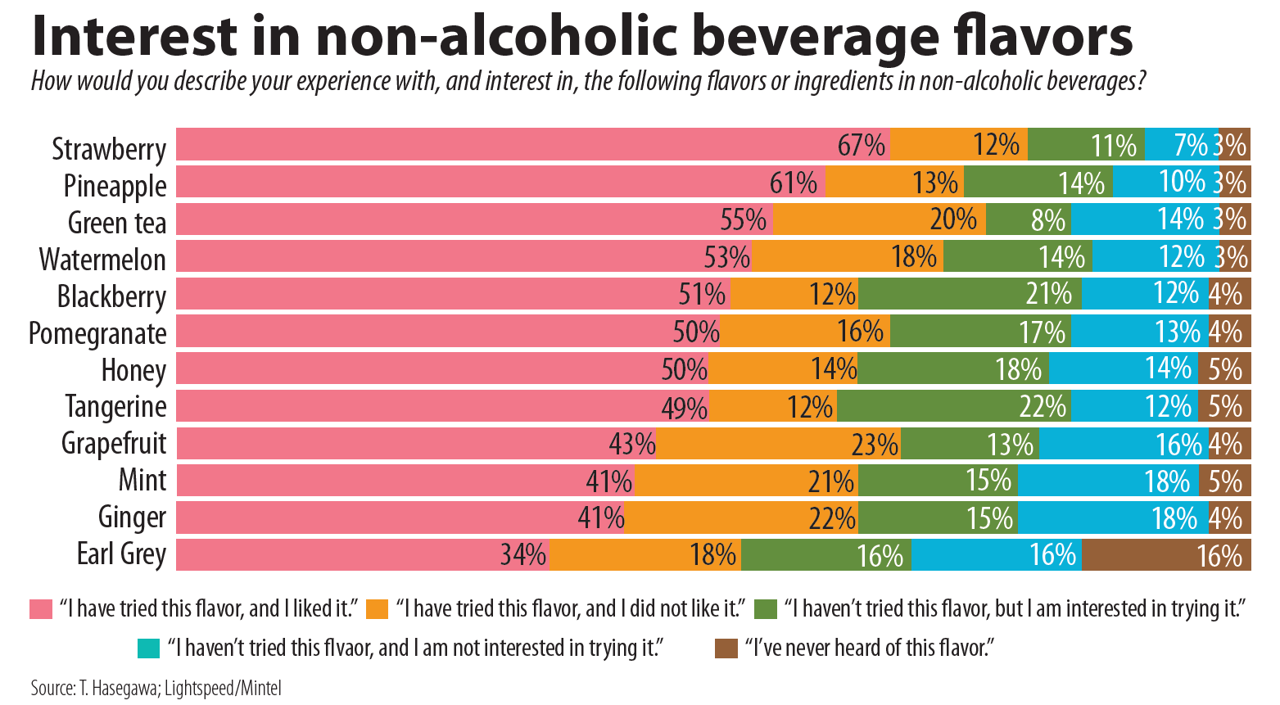 T. Hasegawa in a “Flavor Flash” report on non-alcoholic beverages cited Mintel data from February showing 53% of consumers have tried watermelon-flavored, non-alcoholic beverages and liked the beverages, which compared to 18% who said they had tried them and did not like the beverages. Watermelon has a strong summertime association, and many consumers may find the flavor nostalgic since they grew up consuming watermelon-flavored candy, according to the T. Hasegawa report.

Flavor Radar, a flavor-mapping technology from FONA International, Geneva, Ill., listed watermelon as a trending fruit flavor, pointing out it pairs well with strawberry, sour flavor and lemonade. Top product categories for watermelon flavors are sugar and gum, confectionery items, juice drinks and flavored waters, according to the Flavor Radar.

“In a recent Mintel survey, more than half of consumers have tried and liked mango and pineapple, two foundational tropical flavors, while a quarter of consumers are eager to try guava in the category,” Mr. Resh said. “In fact, guava is particularly popular with Gen Z and millennial consumers, so we anticipate significant growth for that flavor to continue.”

“Consumers are often introduced to these flavors through sweet categories like confections and desserts and become more open to these flavors in a wide range of other food products and especially in the beverage category,” he said.