We use cookies to provide you with a better experience. By continuing to browse the site you are agreeing to our use of cookies in accordance with our Cookie Policy.
Home » Sweet Nothings expands beyond the freezer aisle

SAN FRANCISCO — Beth Porter and Jake Kneller launched Sweet Nothings, a line of spoonable, single-serve smoothies, with the goal to “make it easier for people to eat more of what they need and less of what they don’t.” The brand is expanding beyond the freezer aisle with its newest addition, snack bites featuring fruit, nuts, oats and flax seeds.

“Over the long term we picture ourselves being across every aisle of the grocery store with products that don’t compromise on health or taste,” said Mr. Kneller, the startup’s chief executive officer. “Our products will always be organic and plant-based with no added sugar. Not just that, but nutrient-dense and antioxidant-rich.”

Ms. Porter developed the brand’s initial recipes in her home kitchen following her young daughter’s decision to adopt a vegetarian diet. A longtime entrepreneur with a passion for health and wellness, she blended organic fruits, nuts and seeds into a nutritious frozen snack with no added sugar or sweeteners. The products, packaged in grab-and-go cups containing a small spoon, were designed to deliver the benefits of a homemade smoothie without preparation or clean-up.

“I just started working on it and sharing it with neighbors, sharing it with everyone that I could, with my kids’ friends because I feel like kids are the most honest critics,” she said. “My kids would tell me, ‘No, this just doesn’t taste right.’ It’s funny still to see my eight-year-old son when I’m creating a new recipe, he’s like, ‘Mom, you need to add a little bit of dates in this’ or ‘It’s not popping. You really need to bring out the mango.’”

Soon after, she met Mr. Kneller, who was attending business school at Stanford University and previously led strategy and business development at Impossible Foods. The two bonded over a shared desire to build a “truly good-for-you food company,” Mr. Kneller said.

In the months that followed, the pair readied the lineup for its market debut, targeting foodservice primarily. The products debuted two years ago, served at corporate offices, including Apple, Morgan Stanley and Goldman Sachs, Mr. Kneller said. The brand was set to expand into theme parks, too.

“Then the pandemic hit, and pretty much all of our revenue disappeared overnight,” Mr. Kneller said. “We realized we need to pivot and focus on retail and supermarkets.”

Last May, the company added direct-to-consumer operations and partnered with online retailers, including Thrive Market, Amazon Fresh and Fresh Direct, as well as natural and independent grocers throughout the country. Sweet Nothings is expected to grow its retail footprint to 2,500 stores later this year. The brand typically is merchandised in the frozen fruit section. 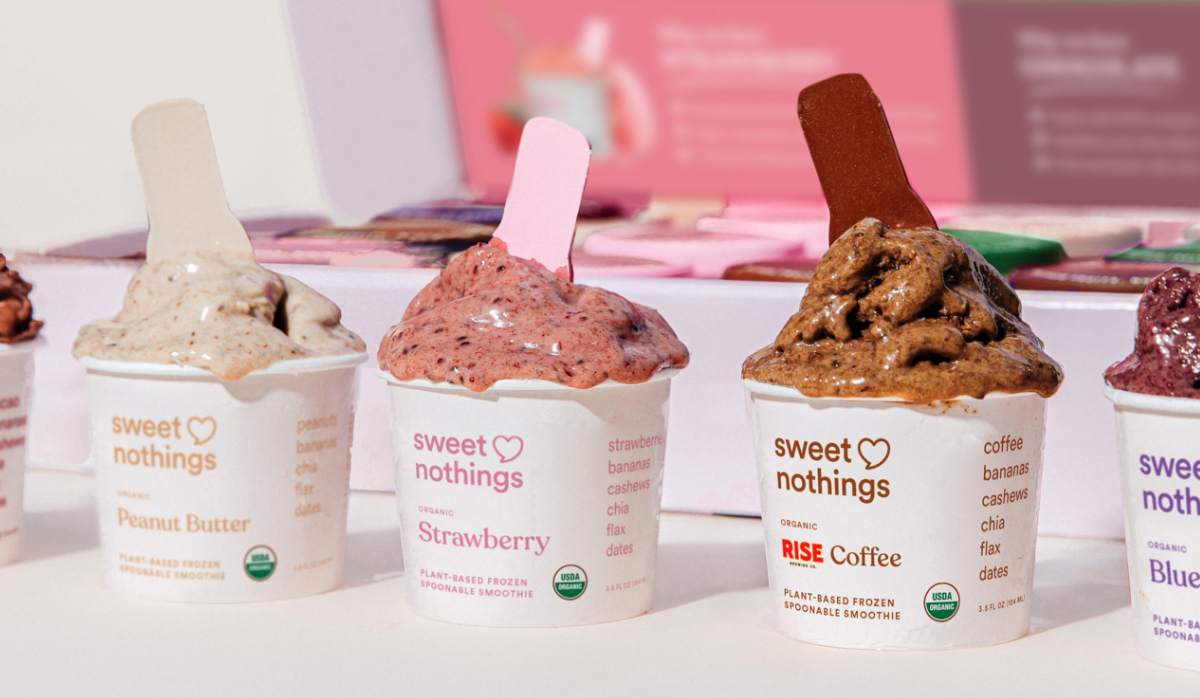 “We think there’s plenty happening in the ice cream aisle and plenty happening in the pint area,” Mr. Kneller said. “What we found is that the customer who really appreciates and loves this product the most is a frozen fruit customer, who is going to buy their frozen berries because they want to make healthy smoothies or add it to their oatmeal… They buy frozen strawberries, frozen blueberries and while they’re there they grab a Sweet Nothings.”

“Blueberry has beet in it, and we’re proud of it,” Mr. Kneller said. “We’re not hiding it. We’re not, ‘Shhh, don’t tell your kids.’ It’s like, ‘Yeah, beets are delicious, and they’re beautiful.’ They bring a nice earthy undertone to the product… I think there’s a lot of white space on continuing to incorporate vegetables where we can on this line and future lines.”

The smoothies have a creamy texture without relying on gums or stabilizers. Instead, flax and chia provide the soft consistency.

“We now have patents pending on the use of chia and flax in place of traditional gums and stabilizers in frozen food products, and we’re pretty far along in that process,” Mr. Kneller said. “Beth from the get-go was like, ‘No, we don’t need to add this stuff. There’s natural stuff in the world that can do the same for us, and we’re going to figure out how to do it and if it takes us a little longer, it takes us a little longer.’”

The brand’s new Superfood Nut Butter Bites are available in apple cinnamon and banana chocolate chip varieties. The snacks are gluten-free and plant-based with no added sugar and contain a peanut butter filling. The company collaborated with cookbook author and podcast host Rachel Mansfield to create the new line, which is available at eatsweetnothings.com.

“We know consumers are tired of reaching for the same snacks time and time again, so, just like with our spoonable smoothies, we are excited to bring a unique, delicious, truly good-for-you option to consumers,” Mr. Kneller said. “Sweet Nothings wants to change the way we look at food and our hope is that this latest innovation does exactly that.”