We use cookies to provide you with a better experience. By continuing to browse the site you are agreeing to our use of cookies in accordance with our Cookie Policy.
Home » New report finds ‘worrying gaps’ in reaching sustainable goals

london — A new report from the World Benchmarking Alliance (WBA) has revealed “worrying gaps in the industry’s adaptation to climate change, progress on human rights and contribution to healthy diets.”

The report, Food and Agriculture Benchmark, is the first assessment of the entire food value chain, from farm to fork. It is based on a year’s worth of research conducted by the WBA and ranks 350 companies on their environmental, nutritional and social impact in alignment with the Sustainable Development Goals (SDGs). All companies assessed are part of WBA’s SDG2000, a list measuring the 2,000 most influential companies in the world toward achieving the SDGs.

According to the WBA, only 26 of the 350 largest food and agriculture companies are working to reduce greenhouse gas emissions (GHG) in line with the Paris Agreement, and 123 of the companies haven’t even set targets for reducing GHG.

“The world is becoming ever-more conscious of the environmental destruction our food system is causing,” said Viktoria de Bourbon de Parme, lead food and agriculture transformation at the WBA. “Yet, many companies are not feeling the need to adapt, and smallholder farmers are hit hardest by the climate crisis. Changing temperatures, unreliable rainfall and land degradation are reinforcing poverty and devastating the natural landscape. For the sake of people and our planet, food companies’ denial must end now.”

Meanwhile, 201 companies do not provide evidence of marketing strategies that prioritize healthy foods. The WBA found food retailers, restaurants and foodservice providers are among the lowest performing industries.

Despite the generalized lack of action in the industry, the WBA did find several companies are showing a strong commitment, measurable targets and meaningful impact. 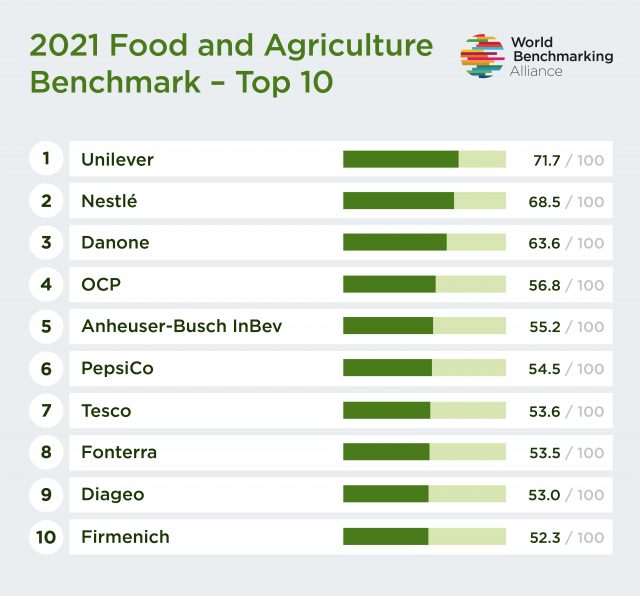 “There is also reason for optimism,” Ms. De Bourbon de Parme said. “Interestingly, Unilever, Nestle and Danone top this ranking. When companies take action to improve the food system, we see positive change. Although we believe there is room for companies to improve their actions to deliver on the SDGs. It’s clear that for conditions to improve for the millions of people who depend on agriculture for their livelihood, targets and commitments set by companies will have to be further implemented across supply chains and at farm level. We need all companies to engage across their supply chains to transform food systems.”

Nestle posted the highest score in nutrition, at 18.8 out of 30, followed by Fonterra, Mars and Unilever, each at 17.5.

The WBA found that the majority of the 233 companies involved in the manufacturing of food and beverage products are taking steps to improve the nutritional value of products in their portfolios, for example through reformulation. However, only 12 out of 233 companies have established targets to increase the proportion of healthier options. And, while 15 of the 233 consumer-facing companies have implemented commercial activities to improve the accessibility and affordability of healthy foods, only two companies have set targets to make healthy food more accessible and affordable to vulnerable population groups, the WBA said.

Trends Health and Wellness Sustainability
Subscribe to Our Newsletters