We use cookies to provide you with a better experience. By continuing to browse the site you are agreeing to our use of cookies in accordance with our Cookie Policy.
Home » A seat at the table

A seat at the table

KANSAS CITY — American grocery store shelves do not mirror the nation’s population. Founders, investors and other industry leaders are determined to change that.

“The reality is that the American population is not homogeneous, and in a country where almost 40% identify as non-white we need to be uplifting and celebrating the flavors of our people,” said Karina Martinez, founder of public relations firm Avana Creative and a founding member of The New American Table. “It’s been exciting to see how more brands are unapologetically leaning into their roots and teaching others the importance of decolonizing their plates and bringing to life flavors they feel personally connected to.”

The New York-based startup offers a line of meal starters, combining the sauces, aromatics, seasonings and oils needed to cook a specific dish, such as Thai larb, Korean spicy bulgogi or Vietnamese lemongrass barbecue. The products are developed in collaboration with tastemakers (who are equitably compensated) specializing in cuisines spanning Southeast and East Asia. Omsom sold half a million units on its website in a little over a year.

“Omsom was born out of our lifetime of experiences as the daughters of Vietnamese refugees, growing up and going into a mainstream grocery store and seeing this sad selection of Asian jars and bottles, and as a kid feeling like it had nothing to do with me or my culture,” Vanessa Pham said. “As I got older, I started to realize, wow, this branding is so stereotypical with dragons and pandas and bamboo fonts, and the flavors are so diluted. Whether you’re Asian or you’re not Asian, people are not inspired or delighted by these products.”

“Pretty much the antithesis of the model minority myth” that paints Asian Americans as quiet and polite, she said. “We kind of want to reclaim that. That’s the heart and soul of what we’re about — not shrinking into the shadows, not holding back our ideas and our thoughts, but sharing them proudly.”

Omsom has attracted tens of thousands of followers on Instagram, where the founders share recipes and shed light on issues like “why does the ‘ethnic’ aisle even exist?” and “the roots of anti-MSG xenophobia.”

“We’re driving these dialogues to drive change on multiple fronts,” Vanessa Pham said. “It’s all about bringing people into our community, being inclusive, but also helping people on their journey of learning about all the different ways that Asian food is seen and discussed that might be harmful or perpetuating ideas that it’s cheap or not healthy or super salty or oily or dirty.”

Pull up a chair

The coalition’s efforts include curating conversations around equity and inclusion and increasing focus and funding for historically excluded entrepreneurs.

“The food ecosystem is being defined daily through the types of innovations that receive venture capital funding, debt financing, and shelf space and distribution,” Ms. Cadena said. “Yet there are systemic barriers that can isolate underrepresented groups from these opportunities. This is juxtaposed against a backdrop of rising multiculturalism in America.”

The country is diversifying more quickly than predicted. Four out of 10 Americans identify with a race or ethnic group other than white, according to census data, signaling an unprecedented decline in the nation’s white population. Yet, as pointed out during a presentation at Natural Products Expo East in September, industry leadership remains overwhelmingly white.

“We don’t have much representation of Black, Indigenous, Latinx and other people of color on our industry boards or within our industry leadership circles,” said Carlotta Mast, senior vice president of New Hope Network, during the event. “And that’s increasingly going to be a challenge for our industry because how can we stay relevant to and serve an increasingly diverse consumer base if our leadership doesn’t reflect the needs and the behaviors and the desires of those consumers?” 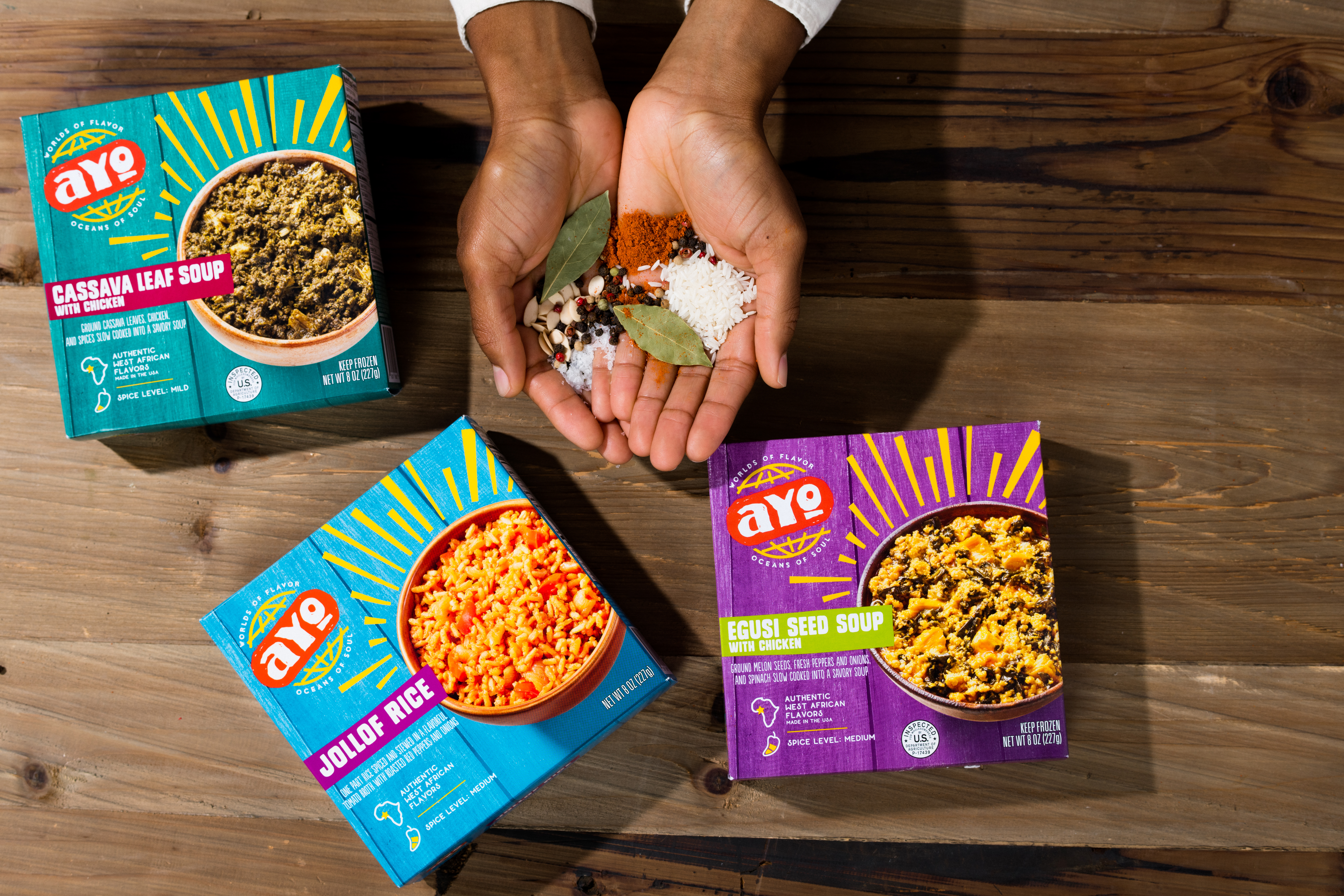 Perteet and Frederick Spencer last year launched Ayo Foods, a brand of frozen meals featuring West African recipes ranging from jollof rice to cassava leaf stew to egusi soup. The venture was inspired by Ms. Spencer’s heritage and upbringing as the daughter of a Liberian immigrant.

“Our launch in frozen was super intentional because there is not plentiful or an easily accessible supply to many of these ingredients, so we wanted to make it as easy as possible for people to enjoy these foods,” Ms. Spencer said. “In my mind there’s no easier way than to just heat it in the microwave for three and a half minutes. For us, we’re protecting that whole process. We spend all the hours sourcing those ingredients. A lot of West African food is really marked by slow cooked flavors. We replicate that process in our plant to protect the integrity of the food.”

“We exist to get people excited about experiencing West African food and culture, and we hope as they enjoy some of our frozen meals, that creates a pathway for them to enjoy West African ingredients and flavors across the store, which really opens up a whole host of opportunities for us as we scale,” Ms. Spencer said.

This past June, Ayo Foods raised approximately $1.5 million in a seed round led by Cleveland Avenue, a venture capital fund established by former McDonald’s chief executive officer Don Thompson. The founders planned to use the proceeds to support manufacturing, marketing and retail distribution. Supply Change Capital also participated in the round.

“Ayo is well-positioned to win in the fast-growing $65 billion frozen foods category where global cuisines are showing strong growth, and the company has impressive performance at a national level,” Ms. Harris of Supply Change Capital said. “Ayo’s ingredient supply chain is also uniquely better-for-you and better for the planet. They are bringing high-protein egusi melon seeds and upcycled cassava and sorghum leaves to the center of plate, while investing in sustainable supply chains.”

The startup also is investing in the communities where its cuisine originates as part of its Moonboi Project initiative. Moonboi means “prosperity” in Kpelle, “my dad’s tribe,” Ms. Spencer said. Ayo Foods has partnered with non-profit organization Girl Power Africa to support the cultivation of Liberian farmland that will be used to create new income opportunities for women.

“It’s really impactful and such a terrific reminder of what we’re trying to build, which is not only a company that celebrates these flavors but really empowers the communities that were the inspiration behind the launch of this brand,” Ms. Spencer said.

The seeds for Mexican-inspired snack brand Nemi were sown a decade ago, shortly after human rights attorney Regina Trillo moved to Chicago from Mexico City.

“One of the first times I went to the grocery store — to the so-called ‘ethnic’ aisle — I remember not feeling represented and seeing well-established brands making products that were using artificial ingredients and portraying Mexico in a stereotypical way,” Ms. Trillo said. “At the same time, I started dealing with health issues, and I couldn’t eat my favorite snack, which are chips, and I couldn’t find a savory snack that had what we all look for in chips, which is crunch and flavor.”

She began experimenting with nopales, the spiky pads of the cactus plant, so revered in Mexican culture that one appears on the country’s flag as a symbol of resilience. The crop itself thrives in hot, dry climates and provides fiber and antioxidants.

“The long crunchy stick, that’s a common format of a snack in Mexico, but the way you see it is deep fried with unhealthy oils and a lot of artificial ingredients,” Ms. Trillo said. “I wanted to create the healthier version of that.”

She launched the business two years ago. The products are sold online and in dozens of specialty retailers, coffee shops and juice bars throughout the country. Flavors include smoky chipotle, Mexican lime, chili turmeric and churro.

Nemi means “to live” in Náhuatl, the language of the Aztecs.

“For us, living a holistic life means caring about our food, the plants we use and the hands harvesting our plants,” Ms. Trillo said. “As a Latina myself, bridging the gender gap and working toward equal pay means that I want to work with women. I want to ask tough questions to suppliers and vendors around diversity, around inclusion, about everything that I’ve been fighting for, not only as Nemi’s founder but also as an attorney in human rights.”

Prior to the pandemic, she relied on in-store sampling. Over the past year and a half, Ms. Trillo collected consumer feedback and redesigned her packaging with vibrant colors to stand out on shelf. She also refined some of the messaging around ingredients, flavors and story to resonate with shoppers.

“It was very important for me to get a sense of how consumers are reacting to this product,” she said. “What do they like? What do they not? What from the story or from a branding perspective is sticking, and what is not?”

As she prepares to expand her brand’s reach, Ms. Trillo is thinking about merchandising. She wants to see her products in the snack aisle, not the ethnic or international aisle, where she found herself standing a decade ago, feeling excluded and perplexed.

“We want to be able to compete with bigger brands,” she said. “We have that right.”