We use cookies to provide you with a better experience. By continuing to browse the site you are agreeing to our use of cookies in accordance with our Cookie Policy.
Home » Bringing innovation to the bacon segment

Bringing innovation to the bacon segment

EMERYVILLE, CALIF. — Camilo Velasquez spent most of his career working in consumer goods, including the sports equipment industry and working with leather goods. He and his wife, Elisa Lewis, are dyed-in-the-wool foodies who, years ago, identified an opportunity in the bacon segment to break the mold of all the companies offering bacon strips. The couple quickly realized that besides some slight twist on thickness or a sprinkle of pepper, what mainstream bacon products lacked was true innovation. What they strived for was creating something that sparks inspiration, Mr. Velasquez said.

“Something that is familiar but completely new,” he said. “We saw an opportunity to come to market with a product line that just stops you in your tracks.”

Their journey began around 2010, when the couple was living in Brooklyn, NY, sharing a loft apartment with another couple, one of whom was a professional chef. Often, the roommates hosted small multi-course gourmet dinner parties for their friends, matching wine with various culinary dishes created by the chef. Initially the get-togethers included small, curated groups looking to socialize with other like-minded people who were foodies like them. The couple found the process of creating innovative dishes as a source of connecting with people and creating unforgettable food experiences. Mr. Velasquez said the “underground supper club” evolved from something fun to do with friends, to a side hustle as he started getting calls from people requesting they host their groups in more of a catering arrangement.

“Elisa was on the hosting side, and I was on the food side,” said Mr. Velasquez, who worked closely with his chef friend who cooked for the growing supper club. The chef routinely included smoked and cured meats on the menu, including porchetta and especially bacon, which piqued Mr. Velasquez’s interest.

The couple went on to move across the country in about 2012, first living in Los Angeles before they settled in the Bay area the next year, where Mr. Velasquez resurrected the dinner club concept, still as a hobby mostly. Soon, he began experimenting with curing and cooking pork bellies himself in his home kitchen, pushing the envelope beyond just making bacon strips and in the process, he developed a passion for the culinary side of creating bacon-centric dishes.

“I would smoke slabs, I would slow cure them for a long time and put all this wonderful flavor in them and realized pretty quickly that just cutting them into strips like everybody does was not the most interesting thing to do with a bacon slab,” Mr. Velasquez said.

Some of the signature products he developed included cutting the slabs into lardons (¼-inch cubes of pork belly) in addition to cutting thick bacon slices into steaks as well as grinding ends and pieces down into ground bacon.

“I was finding all of these different ways I could use it and discovering how that really inspired me to cook in different ways; it refreshed my kitchen repertoire,” he said.

While not a classically trained chef, Mr. Velasquez applied other skills he learned over the years to what would soon be his new culinary career.

“My background is not so much as a chef, but really I’ve been a product developer for many years,” Mr. Velasquez said. “I had my personal experience in cooking, but this was my first real venture into the food space.”

Meanwhile, his wife, who spent years working in graphic design and branding throughout her career, would go on to develop an e-commerce website for the company, just in time for the company to pivot at the height of the COVID-19 pandemic.

Mr. Velasquez officially launched The Baconer in 2016, along with his wife and another partner, Dana Young. By 2017, he had quit his day job and the trio’s sole focus was on growing the bacon business, selling his unique bacon products at farmer’s markets around the Bay area. As demand grew, the company’s production moved into a local commissary-style, commercial kitchen in Oakland. Looking back, selling at farmer’s markets was valuable in developing products, Mr. Velasquez said, because it helped the small enterprise establish a local following and interacting with customers helped him understand how they used his products. 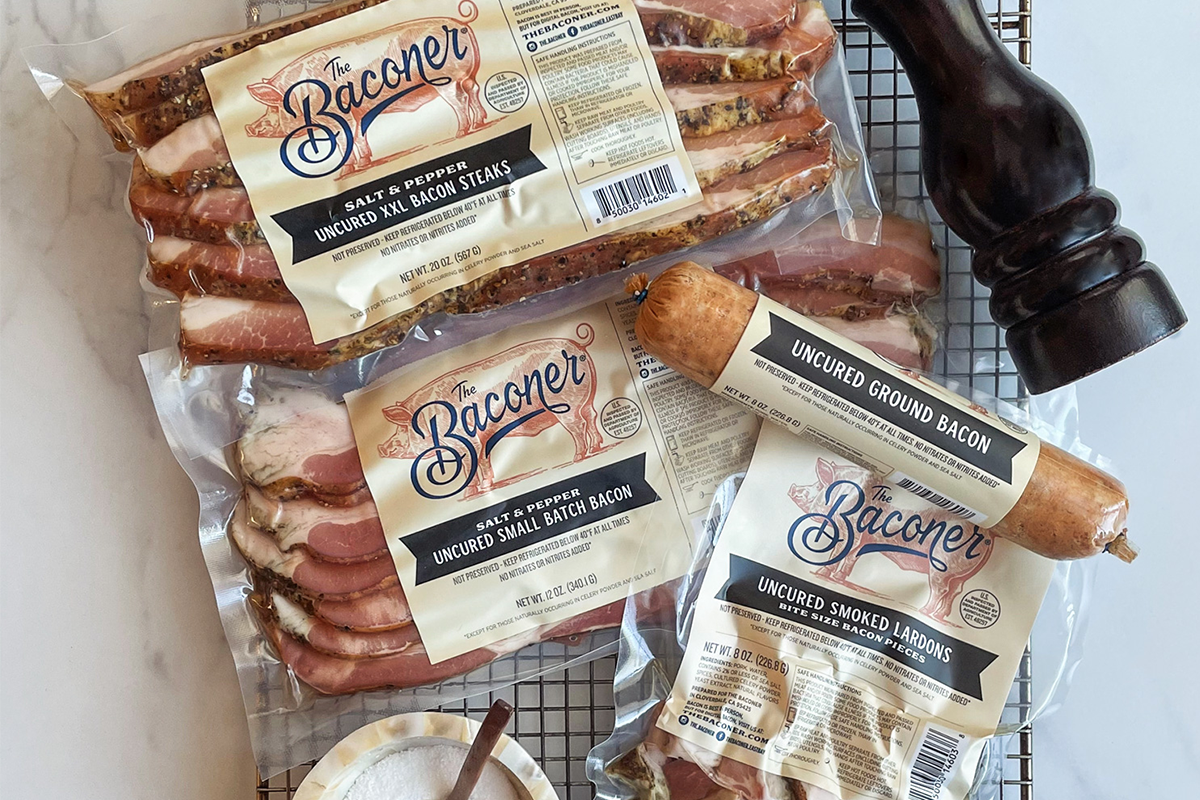 “From the start we’ve been figuring out everything as we go,” Mr. Velasquez said, “probably reinventing lots of wheels, but we figured it out.”

He recalled when the company transitioned from selling at farmer’s markets to retail, which was in 2018.

“At that point, to make the jump from direct to consumer to wholesale, we had to move into a USDA facility,” Mr. Velasquez said.

That federally inspected plant was based in Santa Clara, where The Baconer’s retail product line was launched. A small independent specialty retailer in the area, Berkely Bold, was the first of many retail customers. The Baconer’s products are now on the shelves of most of the specialty grocery stores in the Bay area.

The Baconer also began selling to restaurants in the region, tempting chefs with its unique products as well as operators of small local and national hotels, including the Marriott Marquis in downtown San Francisco. Distribution has recently expanded beyond the immediate region, including a partnership with Eataly North America, which operates specialty grocery stores in major cities across the United States and Food52, an online portal and e-commerce site for culinary enthusiasts, food makers and food companies.

Mr. Velasquez said despite the pandemic, The Baconer’s sales have doubled in the last three years, and with the addition of the line of rubs, which will go into national distribution later this year, he expects this trajectory to continue in 2022 and beyond.

Part of The Baconer’s success hinged on finding the right co-packing partner, starting with one in Santa Clara initially and switching to its current processor in Cloverdale in 2021. Identifying the right match required finding a processor that appreciated The Baconer’s mission to produce premium bacon products made from heritage hogs and focused on quality, not quantity.

“Somebody who has the skill level and ability to produce a product that’s on the level of ours requires some specialty handwork, which isn’t everyone,” Mr. Velasquez said. “Most bacon co-packers are just churn and burn and are just moving stuff through as fast as they can. We had to find someone who had that artisan kind of mindset.”

The product that comes close to epitomizing the artisanal mission of The Baconer is its Salt & Pepper Uncured XXL Bacon Steaks, which features strips that are sliced ½-inch thick. The signature product is designed to be cooked in the oven, pan fried or even grilled. The company also makes cubed bacon pieces known as lardons, smoked, bite-size bacon pieces intended to blow up the savory flavor of any popular dish when used as an ingredient.

“It’s crispy on the outside and it’s hot and juicy in the middle,” he said of the smoked lardons. “You just get so much flavor.”

Mr. Velasquez also developed the company’s brand of Ground Bacon, which is made from the leftover ends, pieces and trim from the other products and has multiple applications from using it as a blend for burgers to rendering it as a dessert topping or ingredient.

“You can bring bacon flavor into pretty much any dish you can imagine,” Mr. Velasquez said.

To pacify bacon purists, The Baconer also offers a variety of thick-cut bacon strips. One of the latest additions to its lineup was its uncured, sugar-free variety. In order to appeal to customers’ diversifying diets all the bacon products are offered in the sugar-free version. Bacon sausage is another product that is unique to The Baconer, available in maple bacon and bacon cheddar, made with 25% bacon and 75% pork.

Spice rubs were another new launch in 2021. The Baconer’s Candied Bacon Rub was developed to enhance bacon but is recommended for all types of meats and non-meat foods. 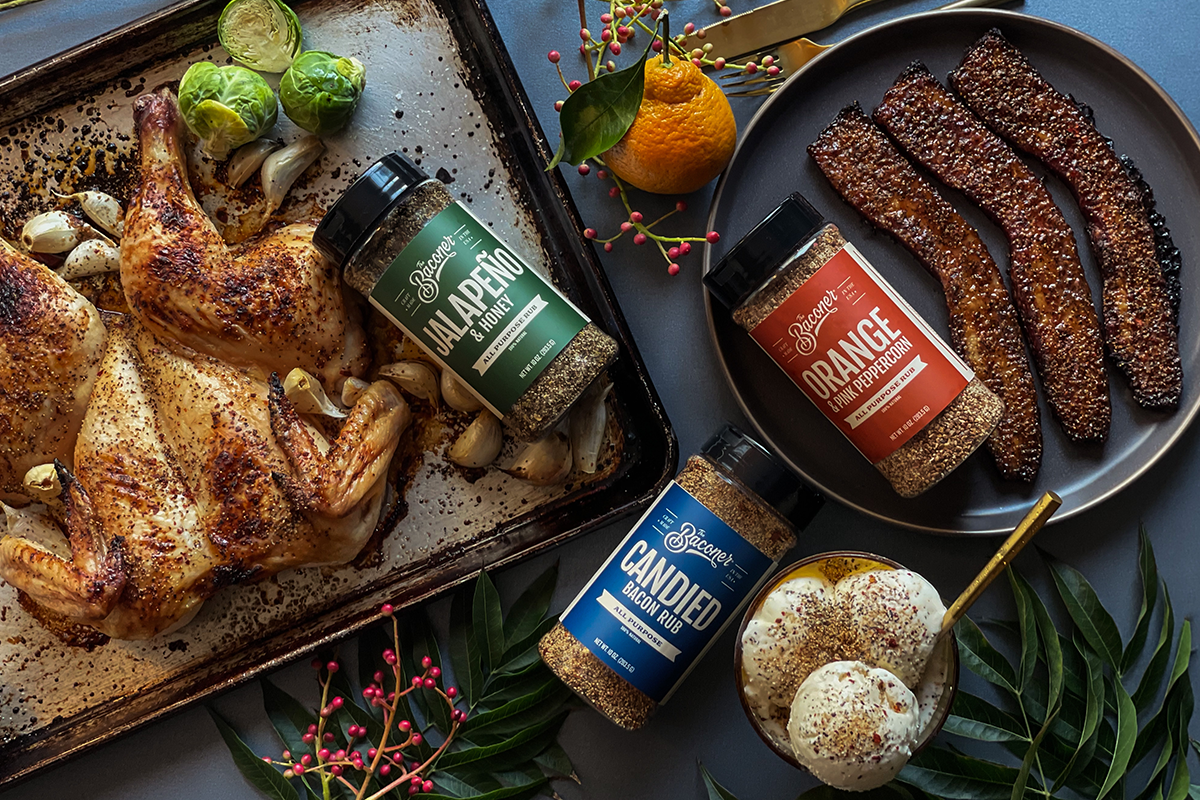 When the company started out, in Oakland, The Baconer’s suppliers were raising heritage hogs in the bay area, but more recently, since early 2020, the company committed to a producer in Iowa who raises Duroc-bred pigs exclusively, raised on vegetarian diets in a crate-free, humane slaughter environment. The arrangement with the Iowa producer allowed the company to sell its products at retail and online and to ship to all 50 states, which was a godsend when the pandemic turned the retail market on its head.

The attributes of the heritage hogs translated to better quality raw material that looked and tasted more appealing and had a texture that isn’t available in most commodity meats, Mr. Velasquez said.

But sourcing pork hasn’t been without challenges, especially in the past 22 months, due to the pandemic.

“We definitely have faced increases in our production costs,” he said.

The Baconer’s pivot included adding a line of bacon rubs in addition to hosting a series of online, instructional cooking classes, designed for team building and wannabe chefs. The company’s customers skew toward more mature, foody types, Mr. Velasquez said, and consumers who are looking for unique products and don’t mind paying a premium for them.

“We’re doing stuff that not really anybody else has been doing,” he said, referring to the bacon-specific bacon rubs and bacon sausage. “It’s not something you’ll find at your average grocery story, like with the bacon steaks and lardons.”