We use cookies to provide you with a better experience. By continuing to browse the site you are agreeing to our use of cookies in accordance with our Cookie Policy.
Home » Can plant-based meat avoid future supply constraints?

WASHINGTON — Plant-based meat alternatives could account for 6% of total meat consumption by 2030 if they continue expanding at their current rate, according to a new report from The Good Food Institute (GFI). Such a scenario would require manufacturers to produce approximately 25 million tonnes of product per year.

The report, titled “Plant-based meat: Anticipating 2030 production requirements,” maps out the investments needed to expand ingredient supply chains and manufacturing capacity to the extent that consumer demand doesn’t outpace the industry’s capabilities in the coming decade.

To determine future ingredient needs, GFI’s analysis assumed the plant-based meat industry in 2030 will roughly mirror the ingredient composition of top products in today’s market, where 62% of meat analogues are wheat- and soy-based.

Because these well-established commoditized crops already are produced at a massive scale, the report estimated just 2% of global wheat and soy production will be needed for plant-based meat in the future. The industry may require as much as three times the projected global supply of soy protein concentrate, however, pointing to a need to expand intermediary processing capacity.

Pea protein may pose more problems. Assuming current yields, the plant-based meat industry could require 10 times the projected global supply of enriched forms of pea protein and 34% of pea production overall by 2030, according to the report.

Because of its relatively low protein content of 28%, manufacturing pea protein concentrate and isolate leads to large volumes of byproduct, namely starch.

“A lack of viable commercial uses for pea protein byproducts like starch has made its production susceptible to volatile commodity prices,” said Dylan Dowdy, PhD, science and technology analysis manager at GFI. “The biggest bottleneck that we see here is processing capacity, but the bottom line is that without greater investment to improve the commercial viability of pea protein side streams, the price of the ingredient may become restrictive.”

There is room for breeding approaches to increase the protein content of peas as well as processing innovations to improve its extraction efficiency, which would result in a higher yield of pea protein isolate per acre, he added.

There also is room for breeding programs aimed at increasing the protein content of other crops. Wheat, soy and potato historically have been bred and grown with an eye toward starch production, resulting in commercial strains with sacrificed protein content, ease of isolation, solubility and flavor. 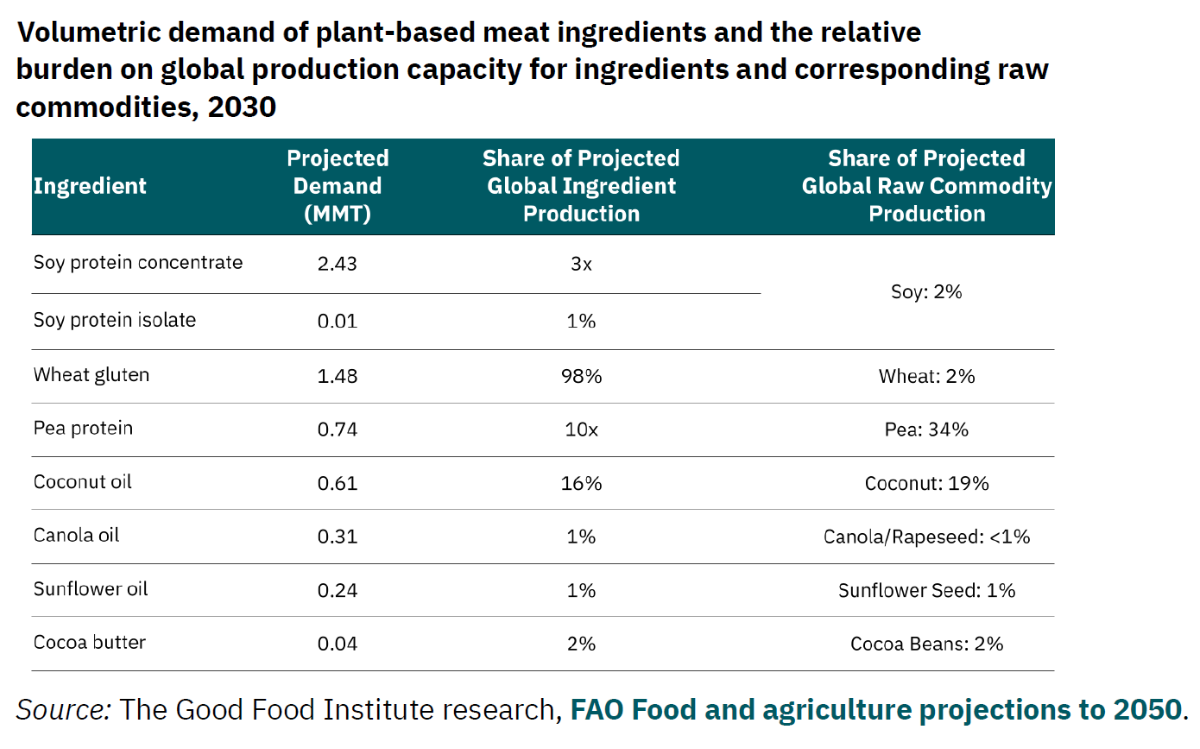 “There are multiple benefits to be gained if we can optimize each step of the supply chain with that end application of plant-based meat in mind,” Mr. Dowdy said.

The report urged manufacturers and ingredient suppliers to explore alternative plant proteins, like certain legumes, oilseeds, vegetables, nuts and cereals, and to seek opportunities to use side stream products like spent grain from brewing in plant-based meats. It also encouraged partnerships in ingredient development, pointing to Cargill’s $75 million investment in Puris, which enabled the company to fine-tune its proprietary pea protein for meat analogue applications.

Coconut oil’s high saturated fat content and resulting functional properties have made it an essential component of many plant-based products. By 2030, the plant-based meat industry could require at least 16% of the global supply, the majority of which is produced in Indonesia and the Philippines. The commodity’s export dependency could lead to supply constraints and price volatility, according to the report.

“If coconut oil retains its dominance in plant-based meat formulations, and alternative means of production are not developed, additional investments in processing capacity and coconut cultivation would likely be required to keep pace with increased demand,” Mr. Dowdy said.

The industry’s reliance on coconut oil, combined with its volatile supply chains, suggests the industry should seek to diversify into alternative fats that provide similar or even superior organoleptic qualities, he added.

GFI estimated the industry will need to operate at least 800 extrusion facilities — each producing no less than 30,000 tonnes of extruded protein product per year — to meet the 25 million tonnes production target by 2030.

“There's a huge need for near term investments in capacity expansion, and this takes time,” said Zak Weston, foodservice and supply chain manager at GFI. “If we have a need today, that means we're several years too late in meeting that need because it takes years to line up the financing and build factories.”

The need for greater capacity and infrastructure, including to manufacture plant-based end products, will require substantial capital from financiers beyond early-stage venture capital firms, he added.

“It is incredibly important that we mobilize private capital, particularly capital that is well suited to infrastructure and hard assets,” Mr. Weston said. “That means primarily debt financing, more so than equity financing. We need to mobilize financiers like banks, as well as some players like private equity funds and a whole new class of institutional investors, rather than just relying on early-stage venture capital, which is generally too small and doesn’t have the right risk return timeframe mandates to play in the infrastructure space.”