US cattle herd continues to get smaller

KANSAS CITY — The US Department of Agriculture in its annual Cattle report issued Jan. 31 estimated the total US cattle herd on Jan. 1 down 2% from Jan. 1, 2021. The number declined for a third consecutive year and was the smallest since 2016. 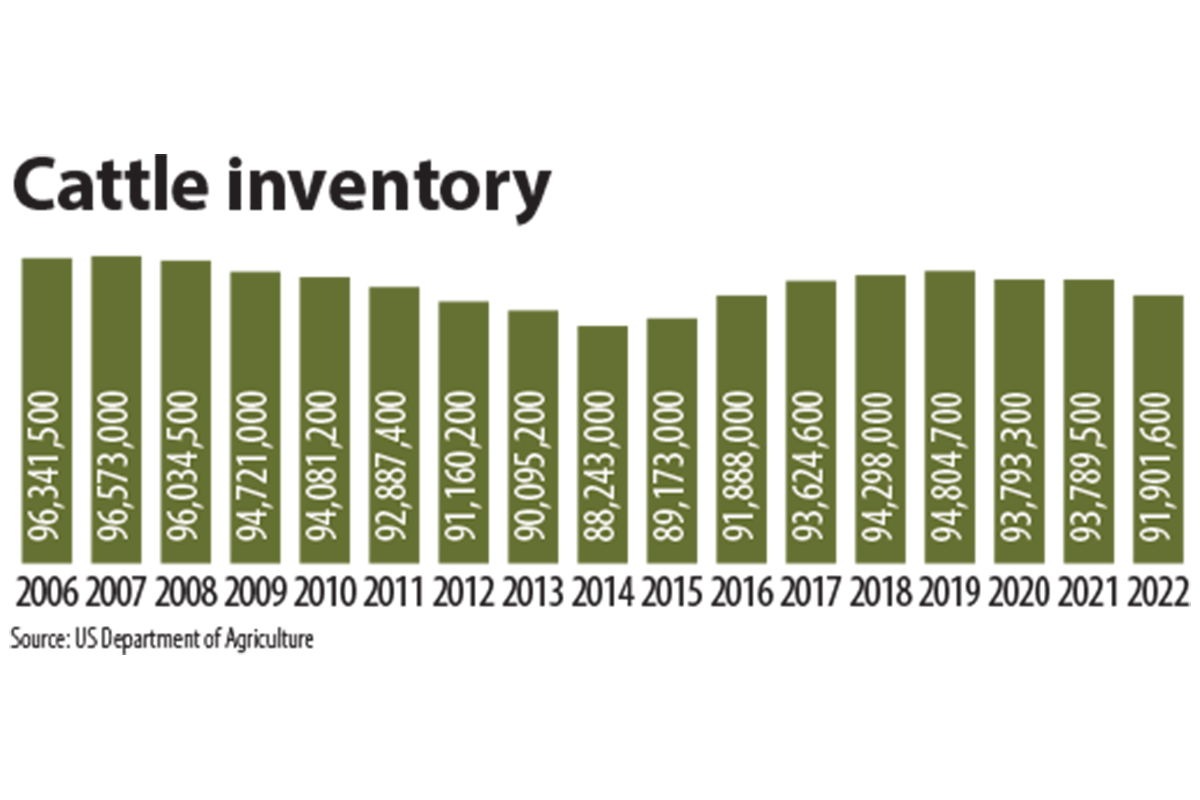 Historically, the cattle herd has risen and fallen in roughly 10-year cycles (actually 12.8 years between peaks and troughs) since the late 1800s, whether the overall trend in numbers is rising or falling, and the overall trend has been falling since 1975. The cycles primarily are driven by profitability (or loss) for ranchers and cattle feeders, but also have been instigated by droughts and other factors. While cattle herds can be reduced quickly, rebuilding takes several years. Beef supplies increase in the early years of the down part of the cycle as additional animals are sent to packing plants, as seems to be the case currently. Numbers then remain low early in the rebuilding phase as heifers that otherwise would have been slaughtered for meat are held back for breeding. Because a cow’s gestation period is nine months, and it takes a couple years for a heifer to be ready for breeding and another nine months for the heifer to have a calf, the cycle stretches to 10 or nearly 13 years, although there have been variations. The USDA Cattle report estimated the number of beef replacement heifers on Jan. 1 at 5.61 million head, down 3% from a year earlier, indicating the rebuilding phase had not yet begun.

Kevin Good, vice president of industry relations and analysis for CattleFax, at the recent 2022 Cattle Industry Convention and National Cattlemen’s Beef Association trade show in Houston noted drought, market volatility and processing capacity challenged cattle producers in 2021 and that without improvement in weather and profitability, numbers would continue to decline. He predicted commercial beef production would decline for the next several years, starting with a 2% drop in 2022 due to lower numbers of beef cows, feeder cattle and slaughter cattle.

The USDA in its Feb. 9 World Agricultural Supply and Demand Estimates report raised from January its forecast of 2022 beef production “as larger expected placements (of cattle on feed) during first-half 2022 are marketed in the latter half of the year.” Beef production in 2022 was forecast by the USDA at 27,375 million lbs, up 210 million lbs from January but down 562 million lbs, or 2%, from 2021.

That strong demand, both domestic and export, should continue to boost beef prices and profitability for ranchers in the latter half of 2022, and the negative impact from COVID should continue to decline, which eventually will encourage producers to start rebuilding beef cattle herds.