We use cookies to provide you with a better experience. By continuing to browse the site you are agreeing to our use of cookies in accordance with our Cookie Policy.
Skip To Content
Home » Reese’s mashups, gummy innovation on tap from Hershey

The meta mashup is the latest in a series of recent brand extensions featuring crunchy inclusions like potato chips and pretzels.

When the company introduced Reese’s Cups with Pretzels in 2020, it became the No. 1 innovation in the stuffed platform and had the highest consumer repeat rate out of all innovations in the stuffed category, said Allison Mason, associate manager of corporate communications at The Hershey Co.

“It started with adding Reese’s Pieces into the peanut butter cup, and when we asked consumers what else they wanted to see, they came back with pretzels and potato chips,” she told Food Business News during the National Association of Convenience Stores’ 2022 NACS Show, held Oct. 2-4 in Las Vegas. “Those brand extensions worked really well because they gave people an opportunity to enjoy their favorite treat in a new way.”

Combining Reese’s with other snack items has helped Hershey target new eating occasions. Reese’s Big Cups with Potato Chips and Reese’s Snack Bar were positioned as afternoon pick-me-ups based on research that found satiety becomes more important to shoppers later in the day. Other products, like Reese’s Snack Cakes and Reese’s Crunchy Snack Cakes, meet demand for sweeter snacks in between lunch and breakfast.

“By the late morning, after you’ve had breakfast and that second cup of coffee, you might be craving something more indulgent,” Ms. Mason said. “That’s a great space for the Reese’s Big Cup Stuffed with Reese’s Puffs to come in.”

Armed with those insights, the company is introducing Reese’s Dipped Animal Crackers. Covered in peanut candy and dipped in milk chocolate, the bite-size cookies will roll out nationwide in November.

Also on display at NACS were new additions to the Kit Kat, Twizzlers, Jolly Rancher and Ice Breakers brands. Initially a limited-edition product, Kit Kat Birthday Cake will launch as a permanent offering next month. The celebratory twist on the crispy wafer snack combines flavored white crème with rainbow sprinkles and will be available in standard and king-size bars. 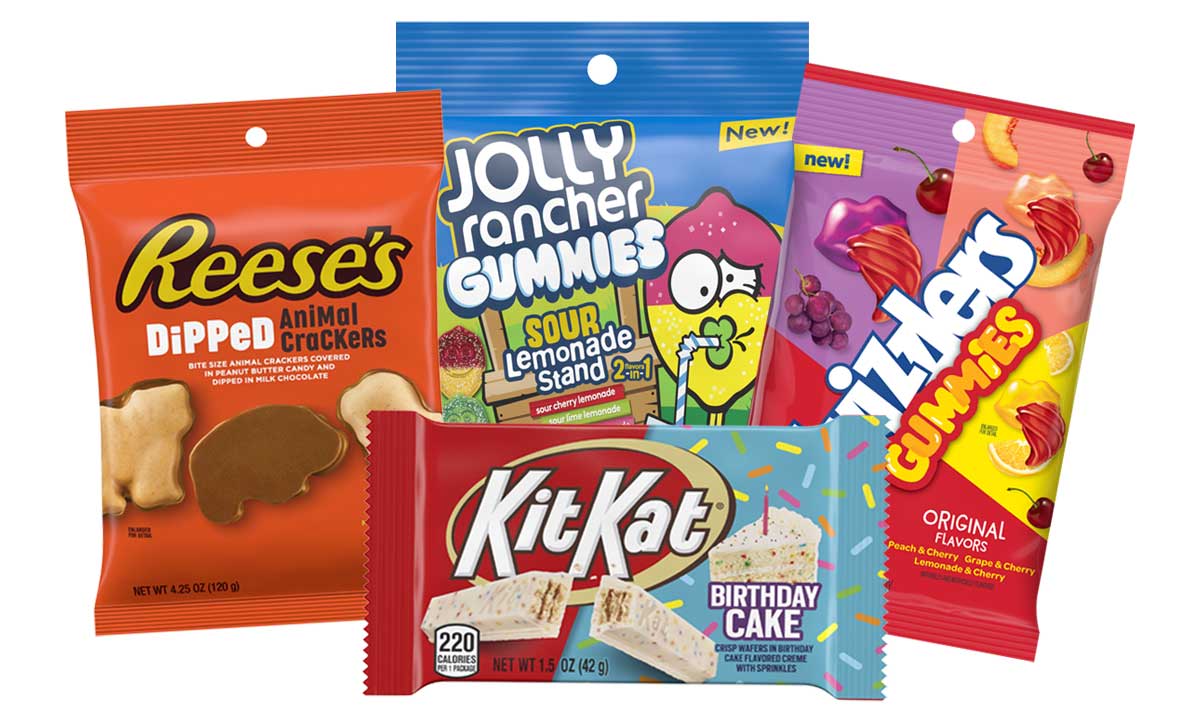 Data from Hershey show the gummy category increased by more than 10% between 2017 and 2021, and new offerings from Jolly Rancher and Twizzlers tap into the demand for squishy textures. The company is expanding its Jolly Ranchers Gummies lineup with new Lemonade Stand Flavors, including sour strawberry lemonade, sour cherry lemonade and sour lime lemonade. New Twizzlers Gummies offer a softer and chewier spin on the confectionery product and come in cherry and grape, cherry and peach and cherry and lemonade flavors.