LAS VEGAS — Food and beverage makers are zeroing in on snacking occasions to drive sales in the convenience channel. From mid-morning treats to afternoon- pick-me-ups, new products geared toward key dayparts were trending at the 2022 NACS Show, presented by the National Association of Convenience Retailers.

Held Oct. 2-4 in Las Vegas, the event saw more than 1,200 exhibitors present the latest innovations for convenience stores, including packaged food and beverages and foodservice offerings.

The convenience retailing industry saw in-store sales increase to a record $277.9 billion in 2021, according to NACS State of the Industry data released this year. The industry grew in-store sales despite a decline in the number of convenience stores, which totaled approximately 150,000 at the start of 2022. Shoppers purchasing more items per trip contributed to sales gains, with the average convenience store basket growing 6% in 2021, offsetting a 7% decline in the number of in-store transactions over the past two years.

Beyond recovery from the pandemic, packaged foods in convenience stores are benefiting from consumers eating more small portions throughout the day, as opposed to a few large ones.

Hostess Brands is leveraging an occasion-based innovation model to reach more convenience store snackers. The company embarked on a “journey of discovery within the $90 billion snacking universe,” digging into all the different occasions in which shoppers consume sweet baked goods, said Christopher Balach, general manager of the Lenexa, Kan.-based snacks manufacturer.

Five areas of focus emerged from that research, he said during an interview with Food Business News at the 2022 NACS Show.

Morning sweets, afternoon rewards and immediate consumption present the biggest opportunities for sweet snacks in convenience stores, according to Hostess. The company’s Boost Jumbo Donettes align with the morning daypart. Launched earlier this year, the energizing donuts contain between 50 to 70 mg of caffeine and are available in chocolate mocha and caramel macchiato varieties.

On display at NACS were Hostess Bouncers, a new poppable take on the company’s baked snacks set to debut this fall. Available in three cream-filled versions, including Twinkies, Ding Dongs and cinnamon Donettes, the bite-size confections cater to the afternoon reward occasion. 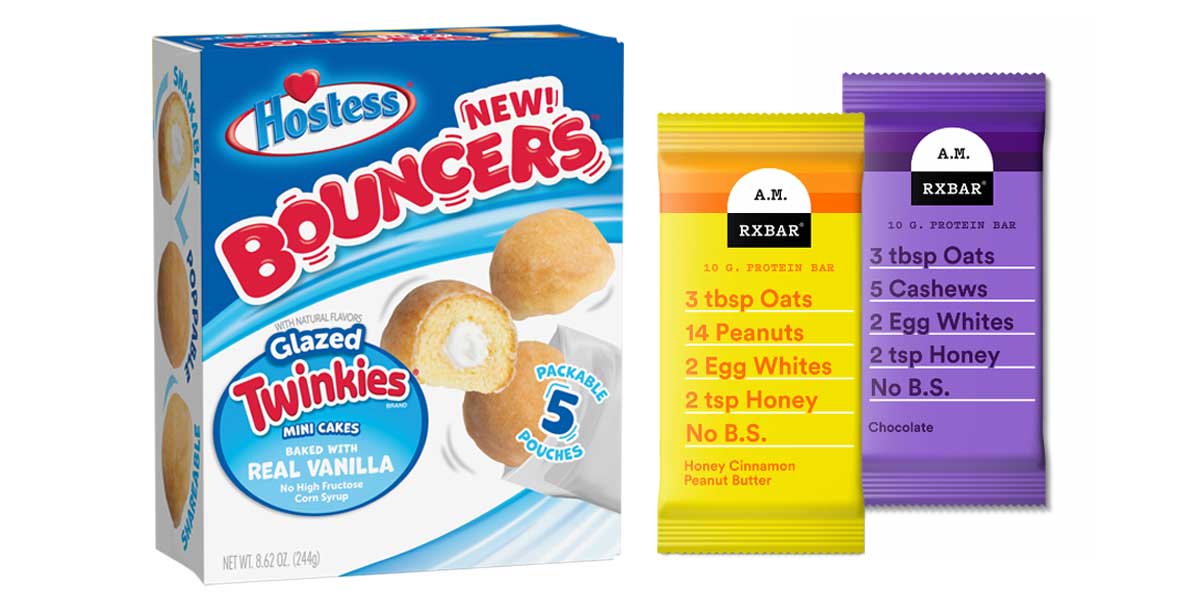 With 75% of the company’s donut business flowing through convenience stores, both products were designed with portability in mind.

“As we’re developing innovation for the convenience channel, we’re keenly aware of who that core shopper is,” Mr. Balach said. “It’s a young millennial male who often is in the store twice a day for a morning fuel trip and an afternoon treat. He’s eating on the way out of the store as he’s hopping in the car and going about his business. Donuts with the functional benefit of caffeine were a great way to start the year. Now, we’re hitting on afternoon snacking with an on-the-go treat that is low-mess and easy to consume with one hand.”

Also on display at NACS were morning-centric snacks from the Kellogg Co., Battle Creek, Mich. The company showcased RXBAR A.M., an extension of the RXBAR brand geared toward morning snack occasions.

“Late-morning snacking and early afternoon snacking are where we’re seeing strong growth in the c-store,” said Daniel DeMeyer, senior director of commercial strategy, small format, at Kellogg. “The core RXBAR products often are consumed as an afternoon snack, but we wanted to target the breakfast occasion as well. Even with work-from-home, the time between 10 a.m. and noon is a big opportunity.”

Launching in honey cinnamon and chocolate varieties, Kellogg’s RXBAR A.M. offerings contain many of the same ingredients as the brand’s core products, including egg whites and oats. One notable difference is the absence of dates.

“RXBAR is known for posting ingredients on the front of the package, but that can be both a plus and a minus,” Mr. DeMeyer said. “Dates are polarizing. One of the big reservations is that they’re too chewy, so we made these new bars a little crispier.”

Landing on convenience store shelves later this year are cinnamon roll-flavored Jumbo Snax from Kellogg, developed in partnership with Focus Brands-owned Cinnabon. The grain snacks are dusted with cinnamon and sugar and build off the success of Jumbo Apple Jax and Jumbo Froot Loops.

“The Jumbo format opens brands up to different occasions, taking them from the morning daypart into the afternoon daypart,” Mr. DeMeyer said. “We think this could be the best of the Jumbo items because of the partnership with Cinnabon. It’s the No. 5 brand among millennials with 94% brand awareness.”

Kellogg wasn’t the only company showcasing Cinnabon-flavored snacks at the 2022 NACS Show. Chicago-based Conagra Brands is gearing up to introduce Snack Pack Cinnabon Pudding in January. Made with the same makara cinnamon found in Cinnabon’s cinnamon rolls, its one of several co-branded Snack Pack products launching early next year. Other upcoming launches include Snack Pack Fruity Pebbles Pudding, a collaboration between Conagra and Post Holdings, and Snack Pack Starburst All Pink Juicy Gels, developed in partnership with Mars, Inc.

A $300 million business and the No. 1 brand in the shelf stable pudding category, Snack Pack has benefited from licensing partnerships with brands across a range of categories, said Audrey Ingersoll, vice president and general manager of sweet treats at Conagra. The company last year introduced Snack Pack Sour Patch Kids Juicy Gels in collaboration with Mondelez International.

“The candy-flavored treat is turning at the top of the category from a velocity standpoint, which shows the power of what co-branding can do,” Ms. Ingersoll said. “These products inject a ton of energy and modernity into the category.”

When it comes to consumer motivation, being exciting and experiential is a key driver for snack products, she added.

“A lot of the time, when you’re snacking, you aren’t actually hungry,” Ms. Ingersoll said. “You’re really just looking for something fun to eat.”

Co-branded flavors are driving growth across Conagra’s sunflower seeds business, too. The company is teaming up with Frank’s RedHot to introduce spicy hot sauce-flavored sunflower seeds under its David Seeds brand.

“When you think about David, it’s the original product, while BiGS has made a name for itself through licensing partnerships,” said Spencer Fivelson, vice president of snacks at Conagra.

“These are powerful brand equities that consumers know and love, so when they see them in the store, it’s an instant impulse purchase,” Mr. Fivelson said. “David is an all-American brand, so we decided the biggest name in seeds should partner with the biggest name in hot sauce.”

Philadelphia-based Frankford Candy and the Kraft Heinz Co. are teaming up to bring a lunchtime staple into the candy aisle with Gummy Lunchables Cracker Stackers and Gummy Lunchables Pepperoni Pizza Kit. The partnership also has seen Kraft Mac and Cheese and Oscar Mayer Hot Dogs receive the gummy treatment.

“Consumers are increasingly interested in experiences with favorite food brands that they can share with family and friends, and gummy candy is on fire right now,” Ms. Jacobson said. “Lunchables is an iconic brand that was the first to allow people to build and eat a meal their own way. We think people will find that Gummy Lunchables are just as fun to play with as they are to indulge in.”