We use cookies to provide you with a better experience. By continuing to browse the site you are agreeing to our use of cookies in accordance with our Cookie Policy.
Skip To Content
Home » Clean label sprinkle company unveils three B2B partnerships

NEW YORK — Woman-owned clean label sprinkle and confectionery company Supernatural has entered new B2B partnerships with Milk Bar, King Arthur Baking and SnackConscious. Supernatural products are made using vegan, RSPO certified and plant-based ingredients, all of which are fully traceable. The company is on track to have 100% of its portfolio manufactured in the United States by the end of 2023.

In addition to the new B2B partnerships, Supernatural has named Christina Tosi, founder of Milk Bar, to the brand’s board. Ms. Tosi has been involved with R&D at Supernatural since the brand’s inception.

The new partnerships fulfill a variety of needs, but ultimately will allow the partnering companies to claim full ingredient traceability and clean label assurance. Canada-based SnackConscious will begin to use Supernatural sprinkles in its birthday cake flavored protein balls and Milk Bar will incorporate them into various grocery products. King Arthur, which already has products featured in kits on the Supernatural website (and vice versa), will use the bulk sprinkles at its on-site cafe in Vermont.

“I am so excited to be teaming up with Supernatural to bring a smarter sprinkle to Milk Bar customers across the country,” Ms. Tosi said. “I have been a fan of Supernatural’s offerings for so long and Carmel and I have bonded over our shared passion for making baked treats accessible for every type of dessert fanatic.” 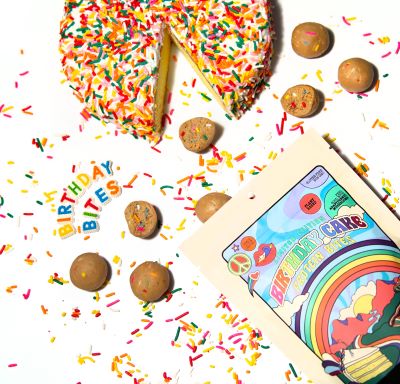 Carmel Hagen, founder and chief executive officer of Supernatural, originally launched the brand in 2017 as a single-ingredient organic coconut sugar company called Sweet Revenge. The company has since expanded to include a range of products, including many different allergen-free sprinkle shapes, vegan frosting mixes and white chocolate chips in a rainbow of plant-based colors.

In an interview with Milling & Baking News, Ms. Hagen discussed the company’s arc from the early beginnings to the recently announced B2B partnerships. As a child, Ms. Hagen recalled that her mother was strict about excluding certain foods from their house — sugar being one of the highest offenders, up there with artificial dyes and hydrogenated oils. For a young Ms. Hagen, who was “obsessed with baking,” these limitations created a massive impediment when it came to decorating baked foods.

“I was just a kid that had this problem and it wasn’t my professional dream to go solve it,” Ms. Hagen explained. “You know, sprinkles and food colors and everything that goes into the decorative side of baking has really always been a pain point for anybody that’s a baker that puts (decorations) on top of their cakes or their cupcakes…. Sprinkles are not flour, and yet they’re omnipresent and everybody wishes they could be better.”

The idea for Supernatural found its roots early on, but it was decades later before Ms. Hagen launched the company. Her professional track was in the tech startup world, yet when it came time to take the next step — launch her own tech company — Ms. Hagen could not go through with it.

“I took all my savings, I bought my first palette of coconut sugar, and I started as a single ingredient company,” she said. “I just felt so much passion being able to start a company inside this specific area that I knew was so meaningful and worthwhile for everybody, and then solving specifically the problem for bakers that was just … decades behind. Everything else had come along, all the other ingredients had made progress, and then all of a sudden you just hit a wall at decorative.”

After starting out by selling fine coconut sugar that launched at Whole Foods Markets within six months of its debut, Ms. Hagen’s sights turned to the decorative void she saw in the clean label market.

“The issue with sprinkles, the issue with food colors, the issue with most pre-packaged frostings, they are all still using ingredients that are not just controversial if you’re an ingredient person, there are ingredients that are, like ... everybody in America could check a box and say, ‘I’ve heard this is bad,’” she explained. “When (better-for-you brands) are trying to use a sprinkle, trying to use color, they are inevitably going to not be able to do that in the traditional way because it ruins their ingredient promise. So it’s totally essential that brands like Supernatural come along and some of these sort of neglected but critical areas of a supply chain get that better-for-you makeover.”

Initially available direct-to-consumer via the company website and select retailers nationwide, Supernatural began to catch the attention of better-for-you brands — like Chobani and Sweetgreen, which both have partnered with Supernatural for limited-time-offerings — that were hitting the decorative ingredient roadblock described by Ms. Hagen.

From 2020 until 2021, the company saw an increase of over 700% year-over-year growth in its direct-to-consumer business. Supernatural sprinkles, frostings, food colorings and white chocolate-based rainbow chips all are free from the top nine allergens. This year, as Supernatural transitions to have 100% of its manufacturing based in the United States, the company also is completing the switch from a corn to a tapioca starch base for the brand’s sprinkles. According to the company, one in four Americans manage food allergies, spending up to $19 billion annually in an effort to buy allergen-free foods.

“Where we have found success — which we continue to invest a little more in and try to get a little bit more data on — is really holiday baking season,” Ms. Hagen shared. “So all of that growth, that wasn’t growth that was set from January to December, that was October to December.”

Homing in on that specific growth period, Supernatural is expanding distribution of its holiday line this year to include Sprouts Farmers Markets, Raley’s and Walmart.com in addition to its current distribution network.

“I’m just so excited to see how the market reacts to having creative sprinkle options … I really think that the cuter of a sprinkle that you can put on a product, (the more) it drive sales,” Ms. Hagen concluded.

Confectionery Plant-based Health and Wellness
Subscribe to Our Newsletters