We use cookies to provide you with a better experience. By continuing to browse the site you are agreeing to our use of cookies in accordance with our Cookie Policy.
Skip To Content
Home » Winter wheat rated 28% good to excellent in first appraisal

The US Department of Agriculture on Oct. 31 released the first aggregate winter wheat condition ratings for the crop that will be harvested in 2023. The 18 principal production states, save California, were in the latter stages of planting as conditions were appraised. The crop in total was rated 28% good to excellent. 37% fair and 35% poor to very poor on Oct. 30. By comparison, the 2022 crop one year ago was rated 45% good to excellent, 34% fair and 21% good to excellent. It was below the average trade expectation of 41% good to excellent and the lowest rating ever for the date, according to analysts.

Conditions were poorest in the production areas suffering the worst drought, especially the central and southern Plains where hard red winter wheat is the principal variety grown. A majority of Nebraska, Kansas and Oklahoma were in extreme to exceptional drought categories according to the Oct. 25 US Drought Monitor. Winter wheat rated good to excellent on Oct. 30 was 24% in Kansas, 11% in Oklahoma, 4% (all good) in Texas, 28% in Colorado, 22% in Nebraska, 29% in South Dakota and 32% in Montana.

Meanwhile, the Central states, where most soft red winter wheat is grown, were merely in abnormally dry to moderate drought stages. Good-to-excellent ratings on Oct. 30 were 56% in Missouri, 35% in Illinois, 65% in Indiana, 55% in Ohio and 53% in Michigan. However, the percentages of area in drought have been increasing since September in most soft red winter states. 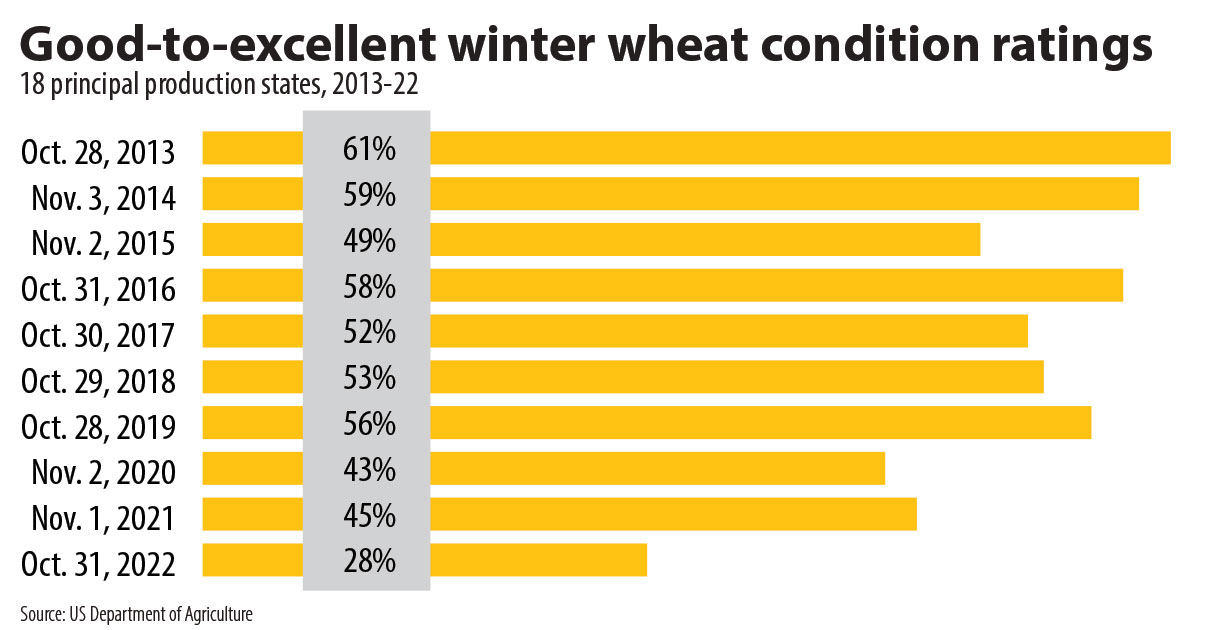 “In the winter wheat market, 28% good to excellent is pretty poor, but we’ve only got 62% of the crop emerged, so we should watch that as the rest of the crop gets into the ground and starts to come up, and there is rain forecast for hard red winter areas,” a veteran agricultural analyst said. “Some places are set to receive up to an inch, a good deal all around because, as they say, rain makes grain.”