In short, the EPA proposal for annual biofuel blending targets under the RFS included increases from 2022 of 0.9% for renewable fuels for 2023 and of 10% through 2025, with biomass-based diesel up 2.2% from 2022 and up 7% through 2025. The soybean and edible oils trade had been anticipating increases more in line with past increases that were near 10% year-over-year, and activity in the futures markets had supported those expectations, analysts said.

Following the EPA announcement, the Chicago December soybean oil future closed down 6.89¢ a lb, or 9%, on Dec. 1, while January, March and May 2023 contracts were down the 4.50¢-a-lb daily limit (the spot month does not have a daily trading limit). Soybean oil futures continued to decline Friday and at the start of the new trading week Dec. 5.

“The January soybean oil futures reversed sharply to the downside after the EPA’s proposed biofuel mandates for 2023 through 2025 came in much lower than the trade had expected,” said Brian Harris, executive director and owner of Global Research Management Corp., Tampa, Fla. “This prompted recent speculative longs to head for the exits in large volume. Soybean oil’s spot share of the product value tanked along with the futures late last week, falling back toward the initial support near 44% after having traded up toward 48% on Tuesday (Nov. 29). The domestic spot soybean board crush margin values also took a hit last week and now are trading $1 per bu off the late-October high. Even with the recent break, current values remain at the high end of historical norms.” 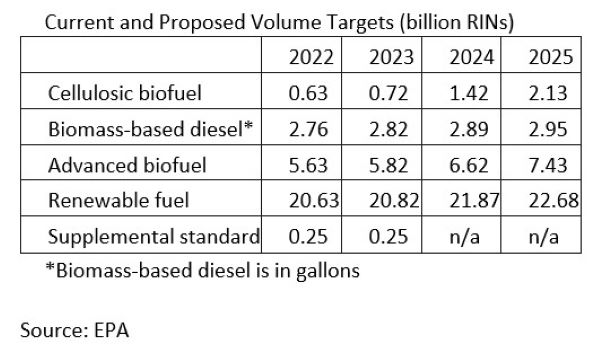 “The availability of US domestic vegetable oil feedstock supply to meet all the demands from the renewable diesel industry remains woefully inadequate,” said Omaha-based consultant Walter Cronin. “Post the EPA’s blend proposal the inadequacy remains, and the function of the market is to ration supply. US soybean crushing capacity growth must occur as it produces the only viable feedstock from a volumetric perspective, soybean oil, and without that growth the renewable diesel industry cannot achieve its ambitions and the EPA proposed blending rates will not occur.”

Mr. Cronin believes that over the next three to five years the market will encourage higher global palm oil consumption due to sharply lower palm oil prices relative to soybean oil prices.

It was the first opportunity the Biden administration has had to impact the RFS, which from its inception in 2005 through 2022 was mandated by the Congress.

The Renewable Fuels Association (RFA), which mainly represents the (corn-based) ethanol industry, had a positive reaction to the proposed mandates.

Geoff Cooper, president and chief executive officer of the RFA, said the proposal was “really good for the ethanol industry,” noting it provided the highest volume ever.

He added that the volume obligations would stimulate rapid growth in E15 and E85 ethanol blends of gasoline.

But biodiesel producers and soybean growers were dismayed by the proposed mandates.

“EPA’s overdue set proposed significantly undercounts existing biomass-based diesel production and fails to provide growth for investments the industry has already made in additional capacity,” said Kurt Kovarik, vice president of federal affairs for the Clean Fuels Alliance America (formerly the National Biodiesel Board), which represents the biodiesel, renewable diesel and sustainable aviation fuel industries. “The biodiesel and renewable diesel industry has already made considerable investments in production capacity and distribution infrastructures that will come online by 2025. The soybean and canola industries have invested more than $4 billion to bring additional feedstock capacity online over the next several years. EPA’s proposed biomass-based diesel volumes undercut those investments.”

The American Soybean Association (ASA) called the proposed RFS “deeply disappointing for the biofuels industry and threatens the integrity of the RFS by significantly dialing back annual increases in volume obligations.”

“America’s farmers have committed to the renewable fuels industry while continuing to provide the feed and food our country and other countries must have,” said Brad Doyle, ASA president and soybean grower. “This draft rule slams the brakes on progress being made in biofuels investment and growth. Instead of continuing to support available, low-emission plant-based fuel sources, EPA has changed course and seemingly is ignoring the major investments in and consumer demand for biomass-based diesel and other biofuels that exists right now.”