KANSAS CITY — Consumers believe high-sodium intake is everyone else’s problem but their own, according to a global survey from the Ajinomoto Group, Tokyo. The SALTS (sodium alternatives and long-term solution) survey was conducted across seven global markets in North America, Europe and Asia-Pacific to understand consumers’ attitudes toward sodium and identify opportunities to develop partnerships and tools to reduce sodium consumption overall.

The survey found that a majority of consumers recognize health benefits associated with reducing their sodium intake, everything from health maintenance to illness prevention to increased longevity. Despite the recognition, they do not see sodium intake as a concern that impacts them personally, underscoring the need for manufacturers and retailers to proactively address this public health issue.

And it is a public health issue. At the White House Conference on Hunger, Nutrition and Health held virtually in late September, the Biden administration detailed plans to empower all consumers to make and have access to healthy choices. The initiative included having the US Food and Drug Administration issue revised, voluntary sodium reduction targets to facilitate the lowering of the amount of sodium in the food supply beyond the original targets issued in 2021.

The FDA also will propose updates to regulations to enable manufacturers to use salt substitutes in standardized foods to support sodium reduction. The US Department of Agriculture will continue work to reduce sodium in school meals consistent with the goals of the Dietary Guidelines for Americans and the FDA’s voluntary sodium targets.

Sixty-four percent of consumers know eating too much sodium is bad for their health, yet only 37% pay attention to how much sodium they consume, according to the SALTS survey. They indicated they would prefer grocery stores to not sell high-sodium foods. In theory, this makes sense. If something is not available, behavior change is inevitable. In reality, consumers would not be happy if high-sodium foods were removed from store shelves. The survey reinforced that consumers prioritize taste above all else when deciding what to eat and they currently believe low-sodium foods are bland and tasteless.

A toolbox of technologies

Suppliers offer a variety of ingredient solutions to assist. Ajinomoto, for example, encourages manufacturers to boost the umami taste in food systems through the addition of monosodium glutamate (MSG), a seasoning that combines sodium with glutamate, the most abundant amino acid in nature. MSG is the purest form of umami, which is a taste that enhances the savory aspects of food and adds dimension to flavors. It assists with sodium reduction because it contains two-thirds less sodium than table salt while being as, sometimes even more, potent in flavor enhancement and at a nominal cost.

“There is an opportunity here,” Ms. Rains said. “If companies make nutritious food taste delicious at a good price point, consumers will buy them, and then companies will make more of these healthier options leading to improved diets, and ultimately, a benefit toward public health.”

Jordan Timm, research and development lead, salt, Cargill, Minneapolis, said, “Sodium reduction can be a challenge in meat and poultry products as salt plays a number of functional roles in these applications, influencing everything from flavor and yield to microbial control.”

“We’ve found potassium chloride allows brands to reduce salt by up to 50% in certain applications,” Ms. Timm said. “This is because potassium salt brings many of the same functionalities as salt.”

The added benefit of using potassium salt is the addition of potassium to the food. Potassium is an under-consumed nutrient with health benefits, including countering the effect of sodium on blood pressure.

“Our proprietary research finds it is also well received by consumers, especially when paired with sea salt,” Ms. Timm said. “When potassium salt and sea salt appear together on an ingredient label, consumers will actually seek out the product because it has stronger health perceptions than either salt or potassium salt as stand-alone ingredients. 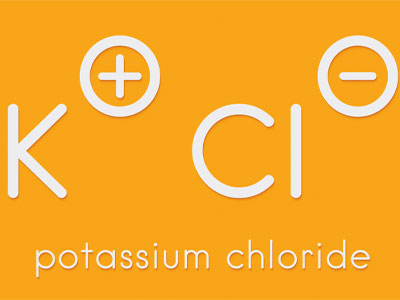 “We’ve helped customers reduce sodium in grilled chicken fillets, cutting the salt by 26% without affecting overall liking and acceptance of the product. Because potassium salt is so similar to sodium chloride, we’re able to use 1:1 replacement, without impacting taste, texture, food safety or other functionality. Using a consumer sensory panel, we affirmed the reduced-sodium product achieved the same consumer acceptance as the full-salt control.”

Linda Call, marketing operations manager, NuTek Natural Ingredients, St. Louis Park, Minn., agreed potassium salt is a viable alternative to sodium salt. The challenge is while potassium salt has a salty taste, it may contribute a bitter and metallic off flavor.

“Our sodium reduction technology uses an innovative and minimal washing and drying process that eliminates the bitter metallic off-flavors without the use of bitter blockers, flavor modulators or synthetic additives,” Ms. Call said. “This enables product developers to significantly reduce the sodium and increase potassium without negatively impacting the flavor, processing, quality or food safety of the finished product.”

Potassium salt is used similarly to sodium salt. It may be applied to meat and poultry applications via tumble and injection marinades, as well as direct addition into comminuted meat emulsions, batters, breadings and blended meat alternatives.

“In recent years, our technology has been extended to successfully combine potassium salt with culinary salts like pink Himalayan, sea salt and kosher salt into a single crystal,” Ms. Call said. “This provides a unique innovation to the category and opens up new marketing possibilities for the finished product.”

“The reduced-sodium system is designed exclusively for the meat and poultry industry,” said Zak Otto, director of research and development-protein group at Wixon. “Our product is a 1:1 replacement for salt, with a reduction up to 50% depending on the application.”

In addition to sodium chloride, there are many sources of sodium in meat and poultry applications. Reducing a little here and a little bit there often accomplishes the desired sodium reduction in the final product.

Ms. Timm said in frozen ready meals it’s important to consider all the sources of sodium. For example, in a chicken patty with gravy, there’s salt in both the gravy and the patty.

He suggested using a calcium-based leavening agent instead of one containing sodium in breading for chicken products, such as nuggets and strips. Innophos also offers a potassium phosphate blend that may replace sodium tripolyphosphate in meat marinades and poultry brines.

Corbion, Lenexa, Kan., offers a variety of functional ingredients where sodium may be swapped with potassium. This includes antimicrobials, such as potassium lactate.

“An up to 100% sodium reduction, as delivered by the antimicrobial ingredient, may be achieved,” said Garrett McCoy, senior manager-research, development and applications, Corbion, Lenexa, Kan.

With dry vinegar and buffered vinegar, regardless of how sodium or potassium salt is utilized, the ingredient label declaration does not change, said Mr. Cropp. However, the nutritional sodium levels may be lowered.

“And that’s what the consumer is looking for,” he said.

Kemin also now offers a line of functional proteins for use in meat and poultry applications that offers processors the ability to reduce sodium levels without negatively impacting yield or quality.

“The functional proteins undergo a patented process that allows them to increase water-holding capacity and thus reducing some of salt’s importance in product formulations,” Mr. Cropp said. “Typically, no label change is required for most of the meat and poultry applications that fall under further processed/enhanced boneless meat items. For the select cases where a label change would be required, it usually would only need to add the species (beef, pork, chicken, turkey, etc.) of the protein and possibly the word water if that isn’t already present on the label.”

Corbion also offers cultured sugar, which is an antimicrobial that enhances flavor without adding sodium. It has been shown to maintain taste in 20%-reduced sodium meat products, enabling a front-of-pack claim to the nutritional benefits, said Mr. McCoy.

Flavors and flavor modulators assist with sodium reduction by enhancing perception of sodium. Typically, they are declared in ingredient statements simply as either natural or artificial flavor. Such flavor technology may be used in everything from burgers to sausages, as well as in batter, breading and marinades.

“We can holistically rebalance the sodium perception with our flavor and ingredient technology solutions while maintaining the functionality of sodium,” said Luiz Antonio Dias Ferreira, savory principal flavorist, Nourish IFF, South Brunswick, NJ. “In this way, we create the perception of salt content in meat and poultry applications. Our sodium reduction tools enable up to 30% salt reduction in an application without compromising taste or functionality.”