We use cookies to provide you with a better experience. By continuing to browse the site you are agreeing to our use of cookies in accordance with our Cookie Policy.
Skip To Content
Home » Weather forecast: Summer Corn Belt weather outlook seen as promising

KANSAS CITY — There were several major story lines at the 41st annual Sosland Publishing Purchasing Seminar that concluded June 5 in Kansas City. The top three likely were freight costs, trade and weather, with the latter not unusual considering the time of year the event is held. While weather has been a challenge in some areas since last fall, conditions across the Corn Belt are expected to be mostly favorable, though not great, for the 2018 row crop growing season.

“There will not be a drought in the Corn Belt,” said Drew Lerner, president and senior agricultural meteorologist of Overland Park, Kas.-based World Weather, Inc., although he said the current dryness across the southern Plains may expand into western portions of the Corn Belt later in the growing season.

Mr. Lerner expects weather in the western Corn Belt to trend drier and warmer with timely rainfall that will support crops during the summer of 2018, with mild conditions and erratic showers in the eastern Corn Belt. He sees conditions this summer similar to those of 1982 and 2000, based on an 18-year weather cycle, with upper air flows so far this year most like 1982.

“Average temperature anomalies for all three years (1982, 2000 and 2018) are cooler biased in the northern, eastern and far western states and warm in the southern Plains,” Mr. Lerner said. “Rainfall is usually erratic and slightly anomalous with the west-central and southern Plains driest relative to normal.”

In its crop condition ratings as of June 3 (just the second of the season), the U.S. Department of Agriculture rated corn in the 18 major producing states at 78% good to excellent, little changed from its initial rating of 79% a week earlier but well above 68% at the same time last year and very high historically for the time of year, although corn still wasn’t fully emerged in any of the 18 states. Corn as of June 3 was 97% planted (100% in Illinois and Missouri, 99% in Iowa and Nebraska) and was 86% emerged in the 18 states, slightly ahead of 83% as the 2013-17 average. 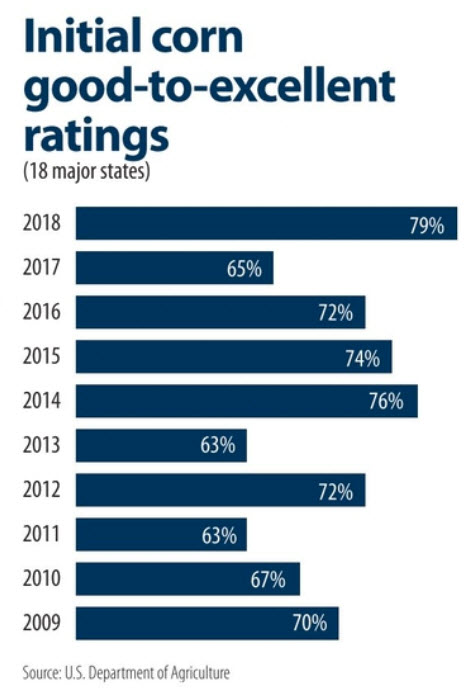 Dryness across the U.S. Southwest (including Texas, Oklahoma and Kansas) remains a concern, as moisture conditions continued to deteriorate over the winter when moisture typically is maintained or replenished. Drought has been reflected in expected sharply lower winter wheat production across the southern Plains, although the stress on the crop likely will result in much higher average protein compared with the past couple of years. Drought conditions have been reflected in winter wheat good-to-excellent ratings of 16% in Kansas (49% poor to very poor), 16% in Texas (58% poor to very poor) and 11% good in Oklahoma (63%) as of June 3. Winter wheat production in May was forecast down 19% from a year ago in Kansas, down 37% in Texas and down 47% in Oklahoma. Winter wheat production estimates will be updated in the June 12 U.S.D.A. Crop Production report. Winter wheat was 35% harvested in Texas and 7% harvested in Oklahoma as of June 3, with combines expected to move through the states quickly due to increased abandoned acres from dry conditions. Harvest had not yet begun in Kansas.

Speakers at the Purchasing Seminar suggested winter wheat yields likely would be better north of Interstate 70, but protein levels likely would not be as high.

“Canada’s crop will not be stellar, but it won’t be a disaster either,” he said.

Current conditions indicate the formation of an El Niño weather pattern later in the fall, which may contribute to the expansion of dry conditions from the Southwest into the western Corn Belt. But the greater El Niño effect may be across Southeast Asia and the Indian subcontinent, he said, which may reduce sugar cane and other crop production in 2019 and 2020. For the current season through August, Mr. Lerner expects a mostly normal monsoon season for Southeast Asia and India.