We use cookies to provide you with a better experience. By continuing to browse the site you are agreeing to our use of cookies in accordance with our Cookie Policy.
Home » Pushing nut varieties further into the mainstream

KANSAS CITY — Consumer demand for products featuring ingredients perceived as natural and healthy is spurring interest in a wide variety of nuts. Nut marketing boards and ingredient manufacturers are taking notice as they amp up marketing campaigns aimed at increasing consumption and getting their ingredients added to a wider variety of food and beverage applications.

This past April the pecan industry launched a national consumer marketing campaign aimed at shifting consumer perception of pecans from a seasonal baking ingredient to the “original ‘supernut’.”

“The American pecan industry has a rich history dating back centuries and a powerful story that is largely untold — our goal is to change that,” said Mike Adams, a Texas pecan grower and chairperson of the American Pecan Council (A.P.C.), Fort Worth, Texas. “Other nuts, to their credit, have benefited from large consumer campaigns for decades. Now, we want to shine a light on our industry that has come together to share the story of the American pecan.”

The A.P.C. is focusing its efforts on promoting the health benefits and versatility of the nuts. Pecans, like other nuts, are n 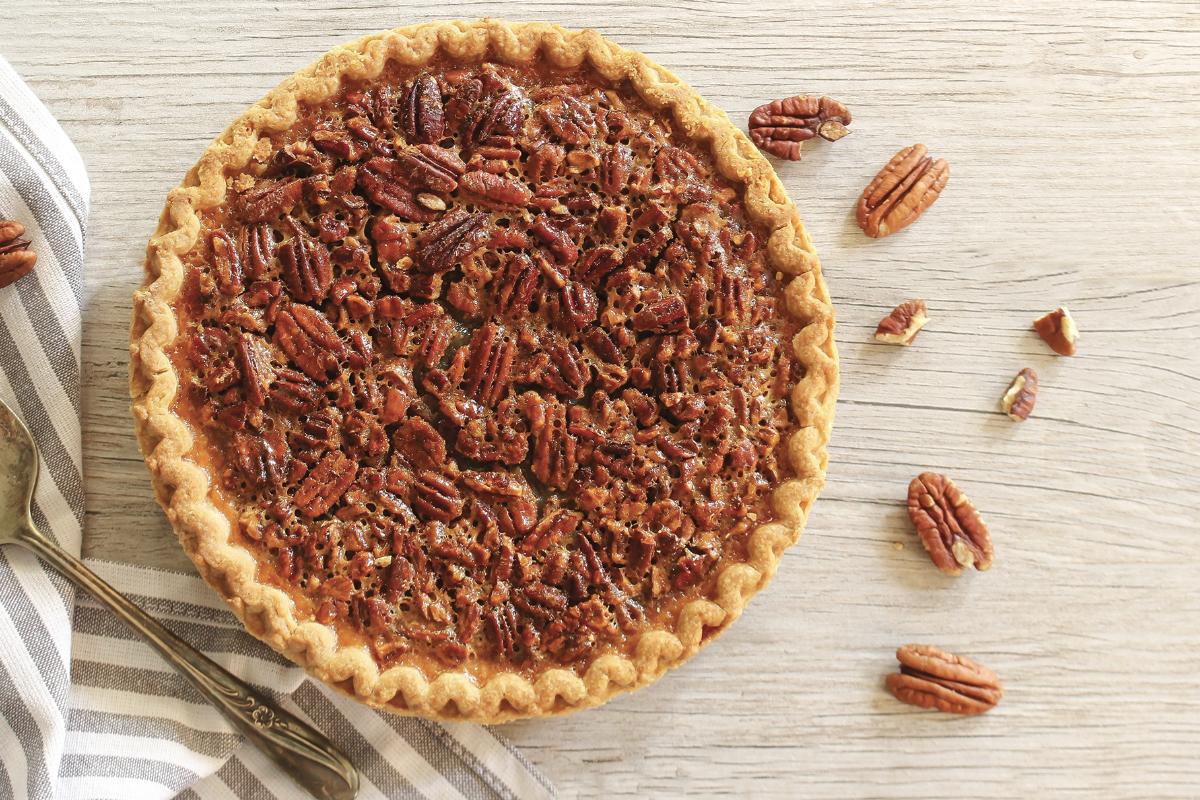 utrient dense, high in monosaturated fats as well as fiber and such minerals as copper, manganese and zinc, according to the group.

“Our objective is to broaden the appeal for pecans as more contemporary and preferred as an everyday snack or versatile cooking ingredient,” Mr. Adams said. “We are elated by the positive consumer testing of our new brand, and there’s a real sense of optimism throughout the industry for what this campaign can do.”

Compared to the almond and walnut industries, pecan growers have ground to make up in terms of production. The U.S. annual harvest of the nut averages about 300 million lbs. The figure is significantly lower than other major tree nuts as almonds (approximately 2 billion lbs) and walnuts (approximately 1 billion lbs).

The California Walnut Board and Commission, Folsom, Calif., is tapping consumer insights to expand the use of walnuts in a whole form or as an ingredient in food and beverage formulations. In 2017, the group conducted a survey of 3,032 consumers and found that 94% said they are looking for creative ways to pursue a more balanced diet. 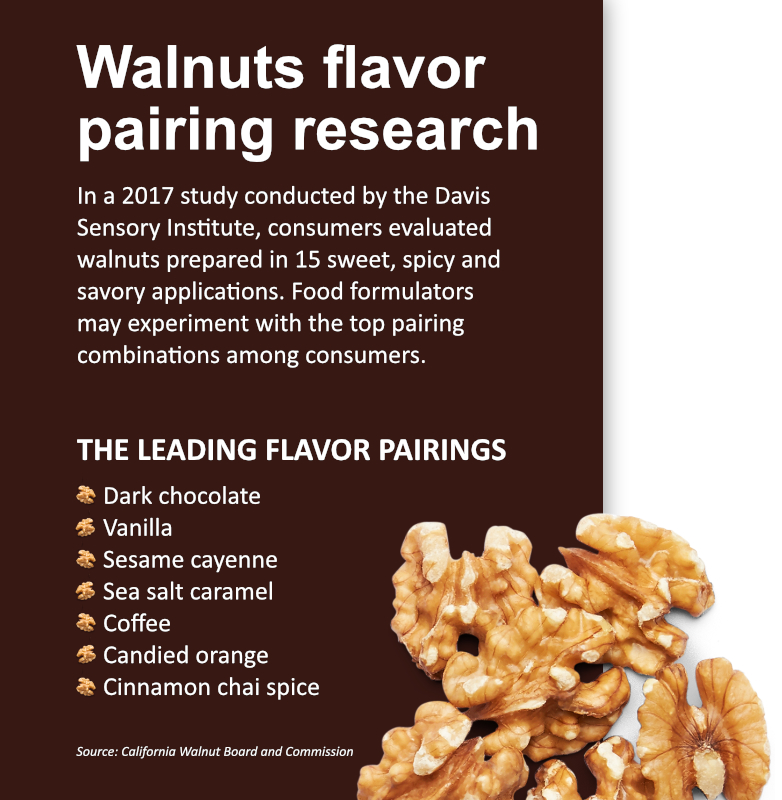 improve their health (71%), followed by eating more nuts (51%). Nuts like walnuts are a particularly useful ingredient because they boost taste while offering satiety — helping ward off hunger for longer, and most of all, satisfying the growing demand for protein and good fats.”

The Commission said walnuts may be used in a variety of applications, including baked foods, dessert bars and chocolate confections for texture. They also may be added to sauces and spreads as a thickener or as a plant-based alternative to meat.

The addition of walnuts in such applications has the potential to enhance a product’s image as being healthy or perceived as featuring clean ingredients. In its “Organic and clean label food consumer in the U.S.” report, the market research firm Packaged Facts, Rockville, Md., noted the association of natural and how it affects the consumer’s perception of a product’s healthfulness.

“Many consumers ascribe positive attributes to clean label foods, even if they don’t personally partake,” said David Sprinkle, research director for Packaged Facts. “The food industry has seen a rise in adults who believe that various food products that are natural, boast organic or animal-welfare credentials, or make other claims to clean label status taste better, are healthier, are more nutritious, or are better for the environment.”

Adding to the value of almonds

Sustainability, food waste reduction and application innovation will be the focus of the Almond Board of California, Modesto, Calif., during the Institute of Food Technologists’ annual meeting and food expo, to be held July 15-18 in Chicago.

The Almond Board of California will lead a discussion about food waste in a July 17 session titled “The future of next generation food waste: How the almond industry is unleashing the potential for co-products.” In the session, speakers will address a partnership with the U.S. Department of Agriculture that has led to the identification of new uses of almond waste, including almond shells being used to ferment beer, boost mushroom production or strengthen recycled plastics. 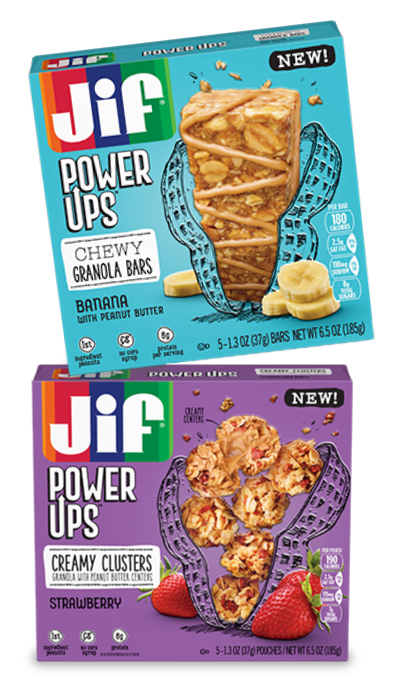 Citing data from Mintel International, the National Peanut Board, Atlanta, noted that product introductions featuring peanuts rose 200% since the start of 2018, and new breakfast cereals featuring peanuts have been a growing category. In hot cereals, The Gluten Free Bar, Grand Rapids, Mich., has introduced PB&J Power Breakfast positioned as “oatmeal but better.” The product has 9 grams of protein and contains no added sugars, according to the company.

Snack innovation featuring peanuts continues with the Kraft Heinz Co., Pittsburgh, introducing Planters Crunchers, which are crispy coated peanuts in such flavors as sea salt and black pepper, hot and spicy, mesquite barbecue, and cinnamon brown sugar. The J.M. Smucker Co., Orrville, Ohio, through its Jif peanut butter brand has introduced Power Ups, which are snack bars that feature peanut butter and granola in such flavors as banana, chocolate and creamy peanut butter.

Investment in expanding the market for tree nuts and peanuts during the past decade has been successful. World tree nut production amounted to 1.2 million tonnes in 2017-18, up 42% compared to a decade ago, according to the International Nut and Dried Fruit Council, Reus, Spain. Similarly, peanut production increased by 43% from 2007-08 totaling over 45.3 million tonnes. As consumer interest in ingredients perceived as clean and wholesome continues to evolve, the tree nut and peanut categories may be poised for additional growth.