NEW YORK — It’s 2043. You may be snacking on gene-edited potato chips, cultured bacon bits or drone-picked fruit. These are among the 31 product concepts imagined at The Future Market, a pop-up exhibit created by Alpha Food Labs and featured at the Summer Fancy Food Show June 30-July 2 in New York.

“The original vision for The Future Market was inspired by the auto industry’s concept car program,” Mike Lee, co-founder and co-chief executive officer of Alpha Food Labs, told Food Business News. “We wanted to bring that same kind of energy and same kind of sparking of the imagination to the Fancy Food Show, to say, ‘Yes, you’ve come here to see today’s products and you see the things you want to stock on your shelves right now, but we also want to leave space for you to spark your imagination and think about how things could be as well, too.’”

The concepts are based on emerging technologies and trends combined with familiar formats and packaging. An example is Aqua Cull Killer Fish Sticks, featuring an invasivore species such as lionfish coated in crispy breadcrumbs. Sourcing invasive fish species that overtake rivers and oceans helps preserve the balance of water ecosystems. To appeal to the mass market consumer, the prototyped rendering features a cartoon fish and friendly language.

“A big part of our formula is we love taking strange, misunderstood or opaque technologies and making them feel boring,” Mr. Lee said. “If you look at the average product on the grocery store shelf, and I’m talking about legacy products that have been around for a while, most people just take them for granted. There’s nothing special about instant oatmeal, where actually that’s a really high-tech thing that we just take for granted now. 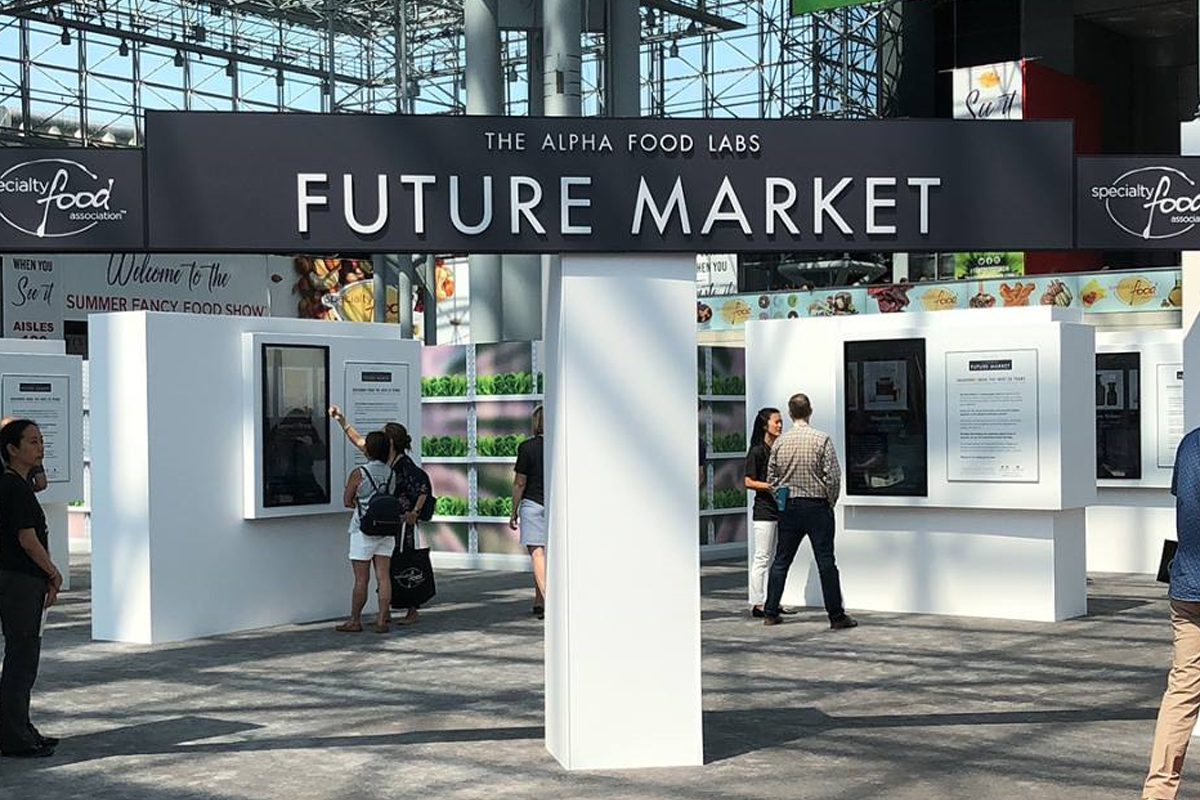 “So, we say, ‘How can we layer on this visual language of big food, mass market brands, which inherently feels familiar to people … but then we pair that with a technology or a thing that’s very unfamiliar?’”

Alpha Food Labs may commercialize some of the conceptual products, such as Crop Crisps, a brand of snack crackers in hard red winter wheat, lentil, white winter wheat and chickpea varieties. The product is designed using crop diversity methods; crops are planted annually in a four-year cycle to help restore nutrients to the soil.

“While we’re not necessarily trying to be pedantic and advocate for all of these things, what we’re trying to do is spark people to get them to think about it, because maybe they weren’t thinking about cellular ag or biodiversity or vertical farming,” Mr. Lee said. “We really feel like the scarier or more misunderstood the technology or method or approach is, the more you need to bring it in a familiar, comforting way. Because if we made this whole thing look like ‘Blade Runner,’ it would just be alienating to everybody.”

While many of the products were envisioned to hit grocery store shelves in the next 25 years, Mr. Lee said it’s important for food manufacturers and retailers to engage with these concepts today.

“What we’re trying to do is to get people to look further out than they typically are charged with in their normal day jobs,” Mr. Lee said. “We get that everybody has to manage the quarter, the year, the annual report, but we don’t want the food industry to get stuck into just going one quarter at a time. We feel that you may not actually have a five-year plan or a 10-year plan, but you should still look that far in advance because I think it can affect how you deal with your one-year or quarterly plan.

“We don’t want people to get caught flat footed, and I think we’ve seen how big food has kind of gotten caught flat-footed. I sometimes wonder if we went back in time 15 years ago, and if we could have predicted things like emerging technologies and the rise of small brands, could big food have prepared themselves a little bit better?”