We use cookies to provide you with a better experience. By continuing to browse the site you are agreeing to our use of cookies in accordance with our Cookie Policy.
Home » Ingredient suppliers adding more organic options

KANSAS CITY — Consumer interest in food and beverages certified as being made with organic ingredients is solidly established. The market has grown rapidly since the organic labeling program began, and it has piqued the interest of ingredient manufacturers interested in serving the market.

Sales of organic food and beverages in the United States reached $45.2 billion in 2017, a 6.4% increase compared with 2016, according to the Organic Trade Association (O.T.A.), Washington. As the category gains scale, its rate of growth is slowing. In 2017, the organic segment’s rate of growth was 6.4% vs. 9% the previous year.

“The organic food market will see a steadier pace of growth as it matures, but it will continue to surpass the growth rate of the broader food market,” said Laura Batcha, chief executive officer and executive director of the O.T.A. “Demand for organic is flourishing as consumers seek out nutritious and clean food that is good for their health and for the environment. That demand is driving innovation, and there are now so many organic options that we can all eat organic for breakfast, lunch, dinner, snacks and everything in between.”

Jennifer Tesch, chief marketing officer for Healthy Food Ingredients, Fargo, N.D., added, “Organics is no longer as much of a niche industry in households, but has become a mainstay for consumers and is more accessible today than it was five years ago. The overall industry shift of consumers wanting traceable clean label, minimally processed products has lent itself to the demand for organic ingredients.” 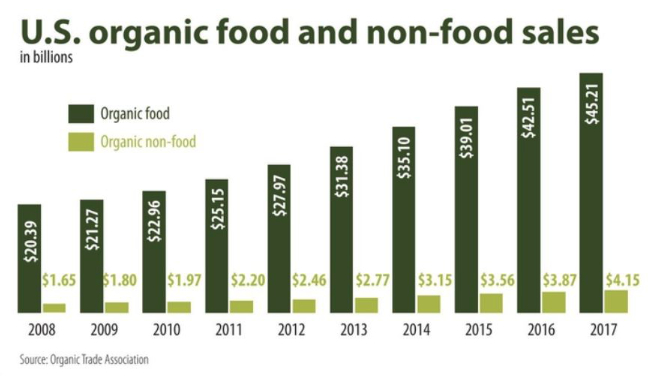 The Andersons, Maumee, Ohio, began working with producers interested in tapping into the market for certified organic crops a decade ago. The company has seen interest in organic production among producers grow and accelerated efforts to grow its scale in the category.

“The Andersons has had a long history with identity preserved ingredients,” said Andy Vollmar, director of food ingredients and specialty grains. “Over the last two years we have magnified our efforts in the organic space. Consumers are demanding much greater transparency and in much greater quantities.

“We are a very farmer-centric organization, and a number of growers were asking questions about transitioning to and marketing crops. Many of them were marketing to 10 different companies and we saw the need to offer a one-stop shop for producers.”

As the organic market has shifted from single ingredient staples like milk, fruits and vegetables to the production of processed products, ingredient manufacturers have been developing ingredients that meet the standards necessary to be labeled as organic. In June, Ingredion, Inc., Westchester, Ill., introduced certified organic additions to its line of functional starches. The native corn starches, marketed under the names Novation Prima 309 and 609, are designed to perform in organic products that undergo harsh process conditions and require high freeze/thaw stability, according to the company. Applications suitable for the ingredients include savory foods, dairy-alternative products and baby foods.

Ingredion conducted consumer research related to organic ingredients prior to this most recent roll-out. They found consumers perceive organic corn starch as being good for their health.

“With the increased level of trust consumers have around products labeled as organic, we are passionate about creating the innovative organic solutions manufacturers need to stay ahead. With Novation Prima 309 and 609 organic functional native corn starches, food developers are now able to meet consumer demand for clean, organic product labels with foods that hold their texture and maintain flavor in the refrigerator or freezer,” said Igor Playner, vice-president of innovation and strategy for Ingredion Inc., North America. “Manufacturers can also now simplify their organic labels by removing other texturizers that may no longer be needed.”

Corbion, which has U.S. offices in Lenexa, Kas., recently added a certified organic variety to its line of Pristine baking ingredients. Branded Pristine Organic 522, the ingredient is a dough improver.

“We believe Pristine Organic 522 will begin to change what consumers can expect from organic baked goods in terms of a quality eating experience,” said Ashley Robertson, market manager of bakery at Corbion. “This category has been considered a healthy option by many consumers for some time, but now organic bakers can deliver more of the appealing sensory attributes associated with the best in baking.”

Consumer research by the company showed the ingredient performed well 6 days and 14 days in terms of such attributes as crumb texture, firmness, resilience and adhesiveness.

“Enhancing the sensory aspects of organic baked goods will broaden the audience for this premium category,” Ms. Robertson said. “It’s another example of how advancements in our baking technology create more opportunity for the industry.”

During the Institute of Food Technologists’ annual meeting and food expo, to be held July 15-18 in Chicago, Mizkan Americas, Inc., Mount Prospect, Ill., will be exhibiting the company’s line of organic vinegars. Varieties of vinegar in the line include rice, apple cider, white distilled, balsamic, red wine and white wine.

A challenge facing the manufacturers of organic ingredients and end products is the supply chain. The supply, demand situation is such that in certain categories raw materials are being sourced overseas to meet demand.

“While we’ve been successful with our supply assurance in sourcing globally, those ingredients that cannot be produced domestically may pose additional challenges in supply,” Ms. Tesch said.

Mr. Vollmar said maintaining traceability is critical to not putting a brand’s reputation at risk.

The group’s Global Organic Supply Chain Integrity Task Force set up the project, which is running from June to September. The task force developed a “best practices” guide to help implement systems and measures to preserve the integrity of organic, both inside and outside of the United States.

Organic fraud was in the news in May 2017 when an article in The Washington Post reported on a 36-million-lb shipment of conventional soybeans going from Ukraine to Turkey and then being sold as certified organic when the shipment reached California, boosting the shipment’s value by about $4 million. Organic imports into the United States in 2017 reached about $2.1 billion in 2017, up nearly 25% from 2016, according to the O.T.A.

Collaborators in the pilot project include the U.S. Department of Agriculture’s National Organic Program, the Accredited Certifiers Association, Inc. (a non-profit educational organization for the organic industry) and NSF International (an independent, accredited organization that tests, audits and certifies products and systems).

Eleven companies that are part of the task force are participating in the pilot project. They represent the entire organic supply chain and a range of products, services and commodities. The participating companies will concentrate on one product or ingredient, or a specific location to run through the program. The companies will seek comments from other stakeholders in their supply chain and then share feedback and give recommendations.

“We’ve worked for a year to develop a fraud prevention program for organic, and now we need to have companies put our recommendations to the test in their everyday business activities to find the elements that have to be further developed,” said Gwendolyn Wyard, vice-president of regulatory and technical affairs for the O.T.A. and staff coordinator for the task force. “This pilot project is key to advancing the adoption of an industrywide systemic approach to preserving organic integrity from the farm to the plate and to ensuring the honesty of global control systems.”