KANSAS CITY — Baking and snack products positioned as healthy and responsibly made will gain momentum as 2018 ends and 2019 begins. Although consumers still crave indulgence in various categories, they are increasingly aware of what they eat and how it is made, and they’re fixing their gaze on a healthy horizon for baked foods.

The rise of the mindful consumer is a top trend highlighted by Innova Market Insights at IFT18, the Institute of Food Technologists’ annual meeting and food exposition held earlier this year in Chicago. Nearly half of global food and beverage introductions in 2017 featured a better-for-you claim, which compared with 42% in 2013. Product launches with an ethical, animal, human or environment claim grew at a compound annual growth rate of 47% from 2013 to 2017. And the number of global savory snack product launches featuring a “thin” claim doubled over the past five years, according to Innova.

Innovating to capture the attention of mindful consumers must be balanced with brand identities. Manufacturers of certain brands known for indulgence are learning that they need to stay true to the consumer experience they’ve delivered for years. Flavor, indulgence and health benefits must all be considered as a new year and a wave of new trends approaches.

Taste is always the cornerstone of innovation. Delivering uncompromised taste in a better-for-you product will not only define 2019 but baked goods for years to come.

There are several trends that represent challenges to baked foods, but that’s nothing new. Paleo, keto and other carbohydrate-restricting diets are gaining popularity.

“If one thing is certain, there will always be a new fad in health and wellness where consumers will either want to increase or reduce certain ingredients,” said Keith Peterfeso, brand director, All Day Snacking, Hostess Brands, Kansas City, MO. “At Hostess, we want to focus on the trends that we believe will still be important tomorrow and next year.”

Tom Vierhile, innovation insights director for research firm GlobalData, said these trends are almost an echo of the low-carb trends that peaked in the early 2000s.

According to the International Food Information Council Foundation’s 2018 Food & Health Survey, 25% of Americans see carbohydrates as the source of calories most likely to cause weight gain. In the 2017 survey, the figure for carbohydrates was 20%. “This negativity is going to encourage bakery companies to experiment with ingredients like cauliflower, lentils and even cassava flour that can be used in place of grain-based ingredients,” Mr. Vierhile said.

He said that the scrutinization of carbohydrates will also open the door for products like the Protein Egg White Wrap from Crepini, New York. The thin crepe-like product is intended to replace grain-based wraps as a high-protein, low-carb alternative. 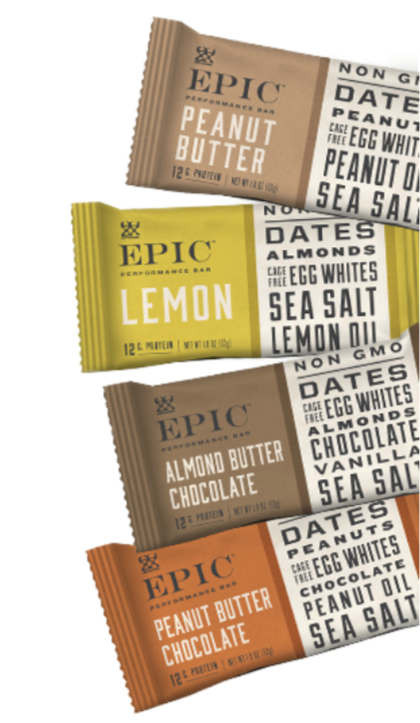 In 2018, Epic Provisions, Austin, TX, a brand owned by General Mills, Minneapolis, rolled out a line of Epic Performance Bars that are made from non-GMO ingredients and contain 12 g protein from cage-free egg whites. The bars are available in four flavors: Peanut Butter, Peanut Butter Chocolate, Almond Butter Chocolate and Lemon.

Having taken root over the past few years, products made with sprouted grains are finding more shelf space as consumers become familiar with their nutritional benefits. According to a 2017 GlobalData consumer survey, 60% of US shoppers said they think sprouted grains and seeds have a positive impact on health.

Mr. Canterbury likened sprouted bread’s trajectory to the organic trend. Years ago, he observed, the mainstream market wasn’t knowledgeable in organic, but retailers realized they needed to carry it as more consumers asked for it. There was a premium involved, and slowly organic products could be found on most store shelves. “Sprouted has the same journey in that it was also a strange sell a couple years ago. And now it’s a must-have,” Mr. Canterbury said. “Especially in the bread business.”

The Black Label line from Alvarado Street Bakery includes six varieties: Sprouted Sonoma Sun, Sprouted Wheat Hemp & Hops, Sprouted Flax & Chia, Sprouted Wheat & Oats, Sprouted 100% Whole Wheat, and Sprouted White. All are certified organic and feature sprouted whole wheat berries. The Hemp & Hops flavor was a recent release targeting several current trends, including the popularity of craft beers. “We looked at incorporating hemp into our sprouted bread,” he said. “It hits on a trend and provides some nutritional powerhouses like Omega 3 fatty acids without much of a taste profile difference.”

“If you’re not looking to innovate, you’re not going to make it,” Mr. Canterbury said. “Bread is great fuel. It’s good food, and if you have a good bread, you’re going to get customers. Things come and go, but in the sprouted organic space, it is higher than ever, and you will continue to see great innovations.”

Mr. Vierhile said that on the better-for-you food front, protein as a macronutrient is not showing any signs of slowing down. “We expect to see companies find ways to tie into consumer enthusiasm toward protein,” he said. 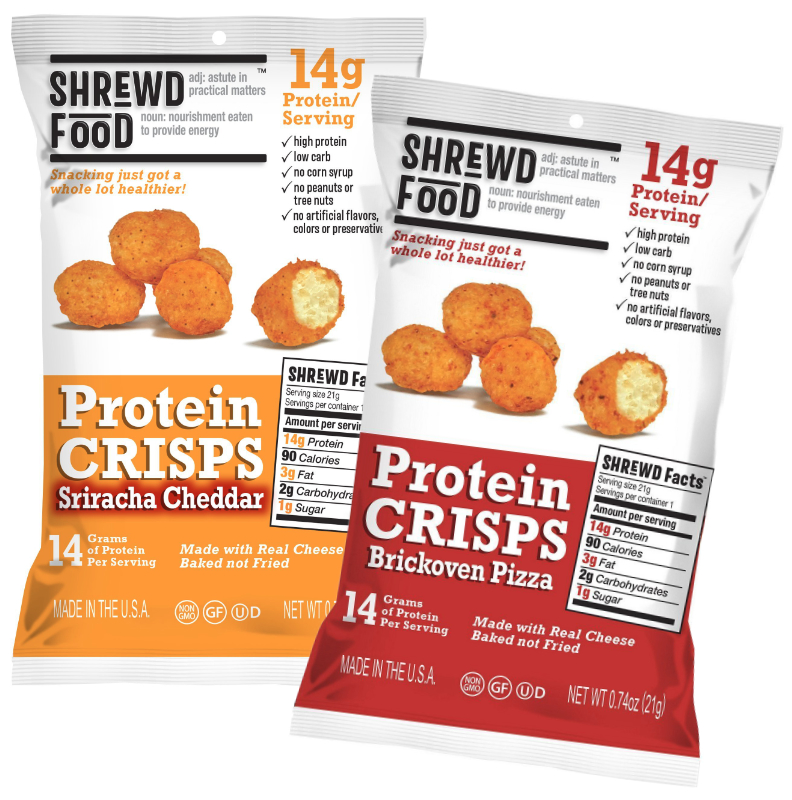 The market is already bursting with protein-packed baked snacks and foods not only for athletes but also for everyday consumers and families. Parents may be more inclined to purchase a protein bar as a meal replacement for an on-the-go child. However, finding flavor profiles to match each consumer group is critical.

New extrusion methods are bringing more puffed, popped, dried and crisped textures to the salty snacks segment and new ways to incorporate proteins into those products. Examples include puffs made with chickpeas, beets and even activated charcoal. Crunch-A-Mame from Greenwave Foods, Mulberry, AR, are organic edamame puffs that contain 7 g protein per serving and include flavors such as barbecue, cheddar and ranch.

The push for more protein reflects a change in consumer eating habits. They are replacing meals more often with quick, nutritious snacks to get them through their busy days. To attract the attention of these consumers, food companies are realizing that snacking occurs across the entire retail store, not just in the chip aisle.

With mealtimes fading away in consumer minds, baking companies are getting creative with ways to get their products into people’s hands, even if they can’t put them onto their plates. While protein and better-for-you aspects of certain products lend themselves well to nutritious snacking, there is also room for indulgence, especially in baking. 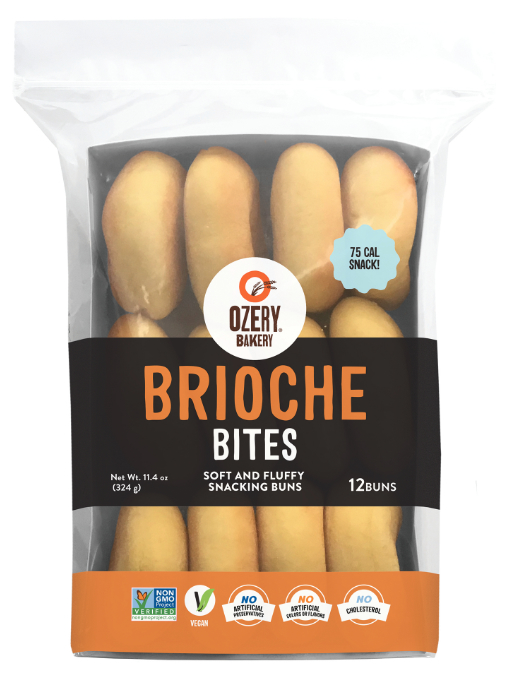 “We think that the bakery category will continue to support product formulations and product types that reflect a desire for indulgence, even if it is only occasional indulgence,” Mr. Vierhile said. “There is always an opportunity for companies to come up with products that taste better, are better for you and better mesh with consumer lifestyles.”

One way to highlight indulgence and manage calorie intake is through portion control. Mr. Vierhile observed that bites, bits, thins and mini-portion sizes have positive outlooks. “One reason we’re bullish on this is that these smaller sizes are an ideal way to convert special occasion products like cakes into everyday indulgences,” he said.

Ozery Bakery, Vaughan, ON, recently released Brioche Bites and Brioche Thin Buns that balance indulgence with better-for-you ingredients. The Brioche Bites are sold in packages that hold 12 bite-size buns and are 75 Cal per serving. Alon Ozery, founder and CEO of Ozery Bakery, said the Bites were designed for all-day snacking. “People are grazing a lot more now, and bites are perfect for that 3 or 4 p.m. craving between meals,” he said. “They give you that satisfaction, and you can have a couple throughout the day.”

The products feature the indulgent soft, light texture associated with brioche, but are dairy- and egg-free. They are also non-GMO and free of artificial preservatives. The Brioche Thin Buns are pre-sliced thin buns made for sandwiches and are 170 Cal per bun. 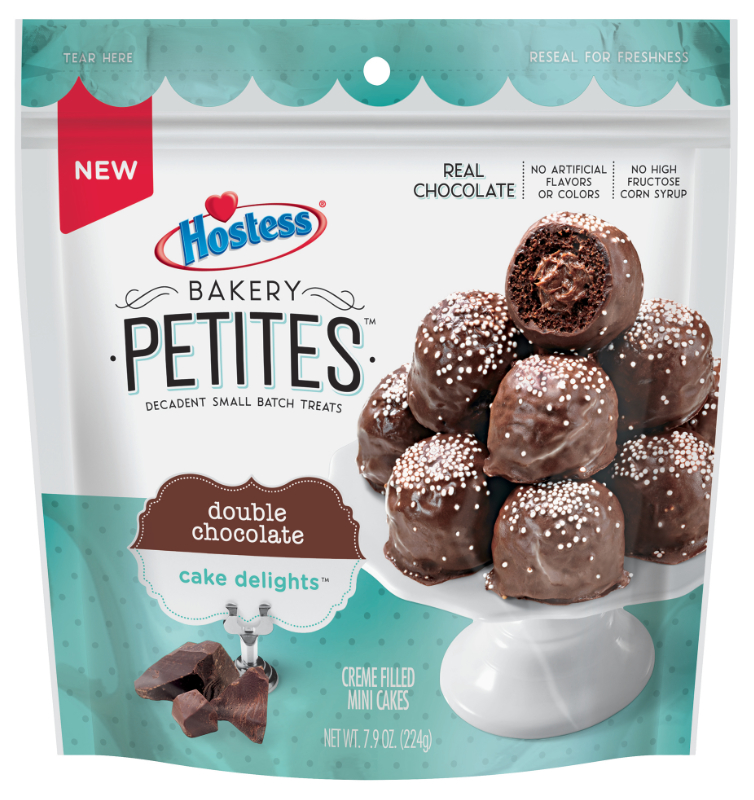 “When consumers come to the snack cake aisle, they are still looking for an indulgent treat to savor and enjoy,” Mr. Peterfeso said. “However, they are also looking for new elements that are not traditionally found in the snacking aisle. For example, consumers are looking for cleaner ingredient decks, with the removal of artificial flavors and colors. They are looking to snack on the go and for portion control.”

He also acknowledged that what consumers crave most is taste. “However, if we are able to provide the flavor and taste they expect and provide some of the better-for-you trends, this ends up being a real win-win for consumers,” Mr. Peterfeso said.

Although GlobalData predicts that the trend toward “cleaner” products will grow, shoppers will want to make their own decisions on gluten-free, non-GMO and organic products.

“This isn’t about producing the flavor of the month; we’re looking at the long term,” Mr. Ozery said. “Our consumers are people who care about what they eat and read labels, and we want to respect that. We don’t want to jack up the protein or fiber in products; we want to keep things the way they’re supposed to be.”

One thing that will help food producers is understanding shoppers and connecting with them in a way that resonates. “There will always be the tension of providing better-for-you without sacrificing taste and indulgence,” Mr. Peterfeso said. “The snacking category has been a largely sleepy one in regard to new product innovation, so the sky’s the limit at this point.”