We use cookies to provide you with a better experience. By continuing to browse the site you are agreeing to our use of cookies in accordance with our Cookie Policy.
Home » It's paleo! It's a bagel! It's The Pagel!

NEW YORK — Cassava flour is the key ingredient in The Pagel, a grain-free, New York-style bagel from Bedrock Bakers, Plainview, N.Y. Steven Friedman, founder and chief executive officer, developed the product several years after he and his family adopted a paleo lifestyle to address chronic health issues. What began as a hobby baking grain-free, dairy-free muffin and cookie recipes for friends at his CrossFit gym became an online, direct-to-consumer business nearly three years ago.

But an introduction to cassava flour during a family vacation at a wellness resort in the Caribbean set Mr. Friedman on a new course.

“At the resort, a couple of days into the vacation, I noticed there was something more authentic about these gluten-free items,” Mr. Friedman said. “So I grabbed the pastry chef one day and said, ‘What’s the secret sauce here?’ And he said cassava flour.

Also known as yuca or Brazilian arrowroot, cassava is a root vegetable that is high in resistant starch, which bypasses digestion and behaves like soluble fiber. Resistant starch is linked to prebiotic and anti-inflammatory health benefits. The South American tuber is gaining traction in gluten-free, grain-free and nut-free cooking and baking and has landed on several trends lists of late.

“I got back to New York and did my due diligence on cassava flour and saw it was a one-for-one substitute for wheat,” Mr. Friedman said.

Soon after, he began experimenting in his kitchen to create a paleo-friendly bagel. After several months of recipe tweaks, The Pagel debuted in April 2016.

“We filed for a trademark for The Pagel,” Mr. Friedman said. “We added The Pagel to the web site, and within a few weeks, it basically became 50%, 60%, 80%, 90% of the business. To the point where it was all we were selling at Bedrock Bakers.”

“To the best of my knowledge, it’s the only certified paleo vegan bagel on the market,” Mr. Friedman said. “To date, it’s a gamechanger. Not just for my family but for our growing customers as well.”

The Pagel is produced at a commercial kitchen in Long Island in a dedicated gluten-free area. Mr. Friedman said he has yet to find a co-manufacturing partner who can meet his specific needs.

“There’s a ton of gluten-free co-packers out there, but most commercial co-manufacturers who are gluten-free don’t want nuts in their facility, and one of my main ingredients is almond flour,” he said. “I found a couple of co-packers who had no problem handling the nuts, but they refused to boil, and that’s one of the reasons why The Pagel is so authentic, because it’s boiled like a New York bagel. They tried to sell me on convection steam ovens, and it was good, but it wasn’t a Pagel.” 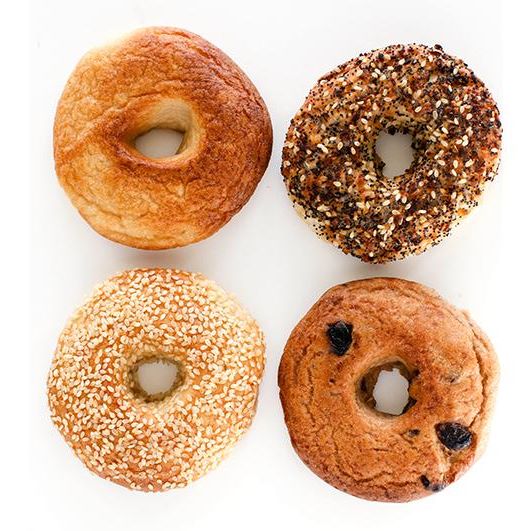 The bulk of Bedrock Bakers’ business is online, direct-to-consumer, at bedrockbakers.com. The products may also be purchased on Amazon.com and at a handful of specialty retailers in New York. In the coming year, Mr. Friedman hopes to expand distribution and introduce additional products, including a pizza Pagel and Pagel chips.

Prior to The Pagel, Mr. Friedman worked in sales at a steel company owned by his wife’s family. Bedrock Bakers was a “side hustle” up until this past May, he said.

“It got to point where because of social media and the amount of online orders I was getting, we as a family decided if this is ever going to be what we believe it can be I have to leave the steel business,” he said. “And fortunately, I’m at the age where colleges are paid for ... and now’s the time to do it.

“I basically reinvented myself at 55 years old.”