We use cookies to provide you with a better experience. By continuing to browse the site you are agreeing to our use of cookies in accordance with our Cookie Policy.
Skip To Content
Home » Prices of organic grains show mixed results in period

KANSAS CITY — Prices for organic food-grade hard red spring wheat declined during the November-December period, but prices for hard red winter wheat, corn and soybeans rose from the September-October period, according to Mercaris, the organic and non-G.M.O. trading platform and market information company.

Compared with a year ago, prices for hard red winter wheat were higher but values for durum and soybeans were lower, with other classes of wheat and corn not having a comparison. Trading of food-grade organic grains and soybeans mostly was slow during the final two months of 2018.

“Organic hard red spring wheat prices remained below $14 per bu through the end of 2018, with some trades settling below $11 per bu delivered,” said Ryan Koory, a senior economist with Mercaris.

“Mercaris has previously outlined the multiple bearish factors weighing on wheat prices, and so far, these issues have yet to change,” he said. “Until winter kill becomes an issue in winter wheat, or spring wheat planting fails to meet expectations, wheat prices will likely continue to struggle.”

There was no year-ago quote for hard red spring wheat. 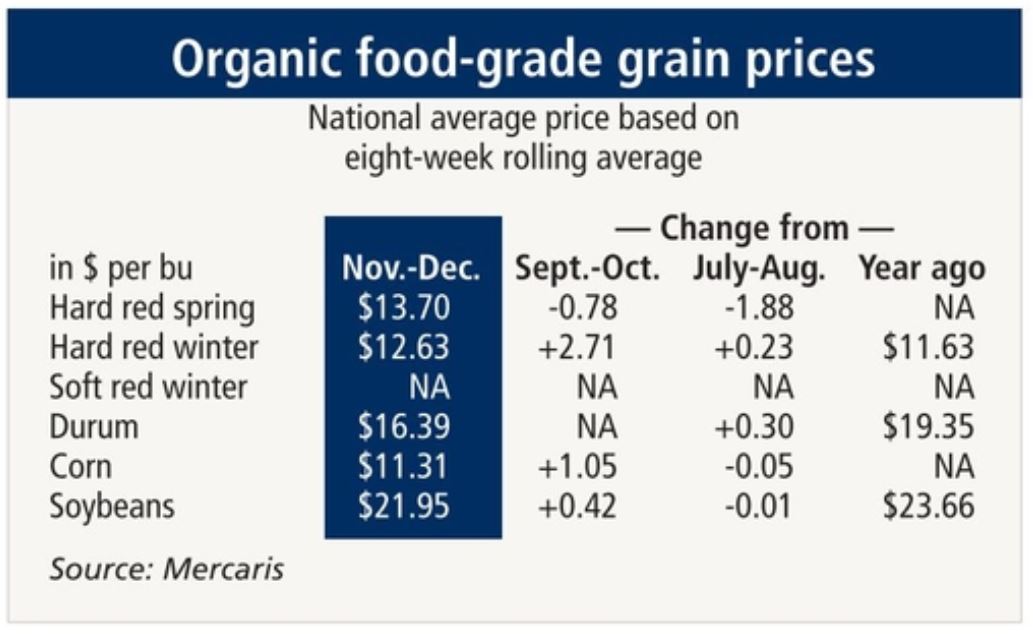 “Organic hard red winter wheat prices recovered and stabilized at the end of 2018 after declining through the third quarter,” Mr. Koory said. “The hard red winter price averaged $12.63 per bu, delivered, over December-November of 2018, with some trades settling above $13 per bu. Wheat buyers have commented on generally low protein content of the 2018-19 winter wheat crop, with higher protein wheat bringing a premium.”

The November-December price of hard red winter wheat was up $1 a bu from a year ago.

“Organic durum wheat remained flat through December on limited contracting activity,” Mr. Koory said. “The market tone for durum wheat has been largely neutral since the start of the third quarter of 2018 with contracts settling mostly steady between $16 and $17 per bu.”

Food-grade organic corn and soybean prices both advanced from the prior two- month period but were down slightly from the July-August period.

“Organic corn trading saw limited activity at the end of December with some contracts settling above the range seen at the start of quarter four,” Mr. Koory said. “However, Mercaris does not take this to be a sign of developing bearish market conditions as it still appears a number of growers are holding corn in their bins waiting for a better selling opportunity. Purchasers should watch for price volatility and buying opportunities toward the end of quarter one as operators look to make cash flow ahead of planting.”

There was not a year-ago price comparison for corn.

Soybean prices were down $1.71 per bu, or 7%, from the same period last year, although mixed changes from the two prior two-month periods were small.

“Organic soybean prices found some support in December, but still closed 2018 below year-ago levels,” Mr. Koory said. “December also saw the volume of food-grade organic soybeans contracted continue to slow from its peak over September-October. However, the slowdown in contracting appears to have been seasonal as January has already seen a significant increase in market activity. Overall, food-grade soybeans appear neutral to bearish through quarter one as supplies appear to be slightly ahead of market demand at the moment, and purchasers are looking for bargains.”