We use cookies to provide you with a better experience. By continuing to browse the site you are agreeing to our use of cookies in accordance with our Cookie Policy.
Skip To Content
Home » The dos and don’ts of marketing plant-based foods

The dos and don’ts of marketing plant-based foods

The language used to describe plant-based foods may either suppress or enhance consumers’ appetites for them, according to recently released findings from the World Resource Institute’s (W.R.I.) Better Buying Lab. After two years of research, the institute has identified four types of language the food industry should avoid and three it should embrace to help boost the appeal — and sales — of plant-based foods.

Using the term “meat-free” may translate to less of what meat eaters enjoy, W.R.I. said, which alienates a hefty portion of the population.

For example, Sainsbury’s supermarket cafe in Truro, England, tested alternative names for its “meat-free sausage and mash” from August to October 2017 to see if sales would change. They did. “Cumberland-spiced veggie sausage & mash” performed the best, increasing sales by 76%, and “Field-grown sausage and mash” came in second with a 51% sales increase. 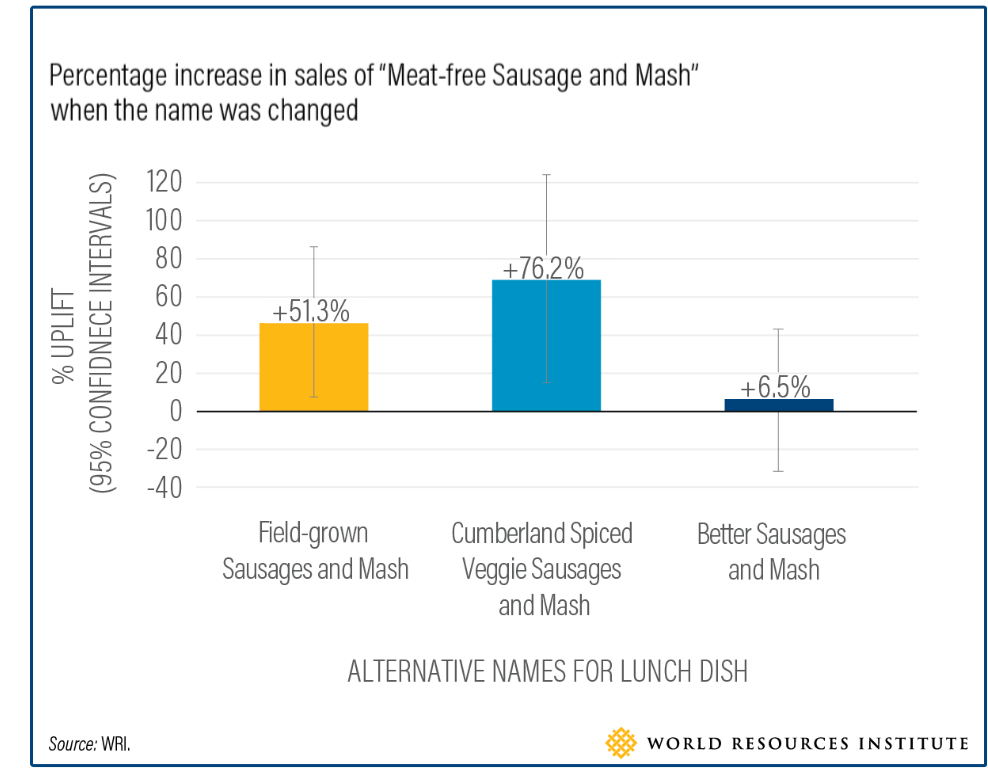 The Sainsbury’s test is backed by results from online trials performed by the Better Buying Lab, W.R.I. said. Across the board, ‘meat-free’ dishes have performed poorly, with virtually every alternative name doing better.

“That’s likely because emphasizing what is missing from a dish triggers people’s desire to avoid losing out on something,” W.R.I. said. “It’s counterproductive to communicate that a food is ‘free’ of meat if the goal is to appeal to more meat eaters. Leading with information about what something will not be like also limits the brain’s ability to positively imagine how it might taste.”

The word “vegan” tends to conjure a “different from me” reaction in consumers, W.R.I. said.

In 2017, the Better Buying Lab commissioned social media analytics company Brandwatch to scan 15.4 million posts across Twitter, Instagram, blogs and forums from the U.S. and Britain that included references to plant-based, vegan and vegetarian foods. The term “vegan” was more than twice as likely to be used in negative contexts as “plant-based,” Brandwatch found. Words most commonly associated with “vegan” in the posts included boring, gross and expensive.

“Our analysis found the vegan lexicon to be quite divisive online, and it may prevent some people from experimenting with the growing range of plant-based proteins available,” said Edward Crook, global research vice-president at Brandwatch. “To broaden mainstream appeal, new language is needed that avoids an ‘us-them’ mentality.”

Another study in the U.S. asked consumers to rank the relative appeal for 21 different labels used to describe food and beverages. The vegan label emerged as the least appealing of all the options. Thirty-five per cent of consumers said it would make them less likely to purchase a product.

“While valiant attempts are being made to rebrand vegan with an emphasis on the younger generation, the baggage held by mainstream audiences may be too heavy to drop,” W.R.I. said. “So while we recommend that ’vegan’ is not used to describe plant-based dishes, we do advise using a symbol, such as a leaf, on menus or packaging to indicate a dish is suitable for vegans. We also recommend checking with local or national regulations for any country-specific denotation.” 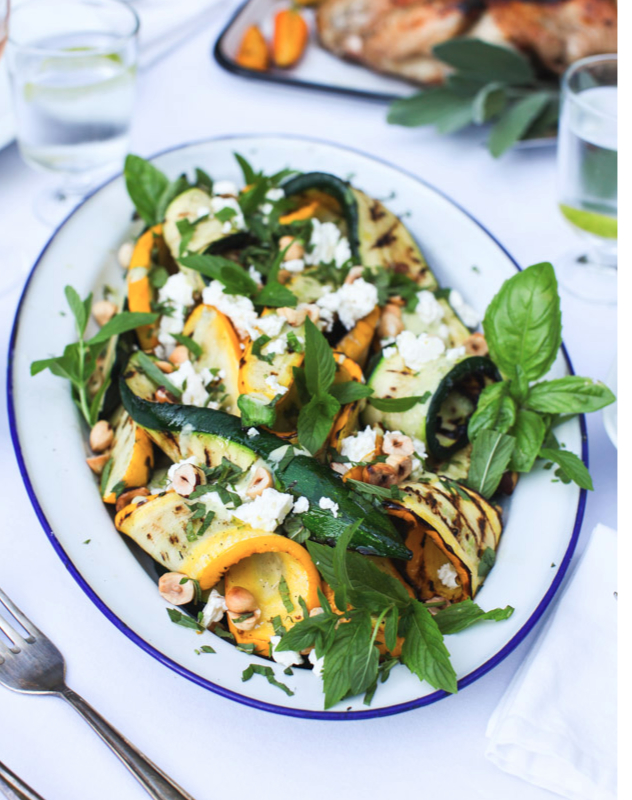 Meat eaters are 56% less likely to order a plant-rich dish if it is contained within a vegetarian box on a restaurant menu, according to a 2016 study advised by the Better Buying Lab. W.R.I. chalks this up to consumers’ perception that vegetarian diets lack nutritional balance and negative stereotypes associated with vegetarians.

On the nutrition front, diners express concern about a perceived lack of protein and/or iron and that a vegetarian diet may be nutritionally unbalanced, W.R.I. found. Additionally, many see vegetarian diets as boring and bland and consider meat-free diets to not be tasty enough.

As for negative stereotypes, vegetarians are sometimes characterized as weak, W.R.I. said, causing omnivores to avoid association with the vegetarian label.

“Many men also worry that a vegetarian diet would make them appear less masculine, though a recent U.S. study suggested that vegetarian men are no longer perceived in this way,” W.R.I. said. “That dubious honor is now given to men who choose to be vegan.”

To arrive at this conclusion, W.R.I. studied guests’ reactions to a beverage offered at a party in the United States. Guests were all given the same mango lassi — a cold mango-yogurt drink popular in India but unfamiliar to those at the party — but half of the guests were told it was healthy and the other half were told it was unhealthy. After the party, those who had the “healthy” beverage rated their lassi as 55% less enjoyable than those who drank the “unhealthy” version.

“Healthy doesn’t sell,” said Erica Holland-Toll, executive chef of Stanford University’s Flavor Lab. “People don’t want to eat dishes that are marketed as good for them. If you have a delicious roasted zucchini with mint and feta cheese, don’t talk about how good the zucchini is for you.”

Last year, Ms. Holland-Toll was part of a Stanford University Residential Dining study that revealed consumers’ underlying intuition is that healthy equals not tasty, W.R.I. said. The study found consumers were less likely to look favorably on labels such as “reduced sodium” and “lighter choice.”

“The point is: like others, you probably want an enjoyable, tasty and filling experience when you eat,” W.R.I. said. “If plant-rich foods are already thought of as ‘boring and bland,’ highlighting these foods’ health benefits can throw ‘not tasty’ into the mix of potential negative perceptions.”

In a time when more and more consumers want to know where their food comes from, labels that call out ingredients’ origin may be evocative, W.R.I. said. 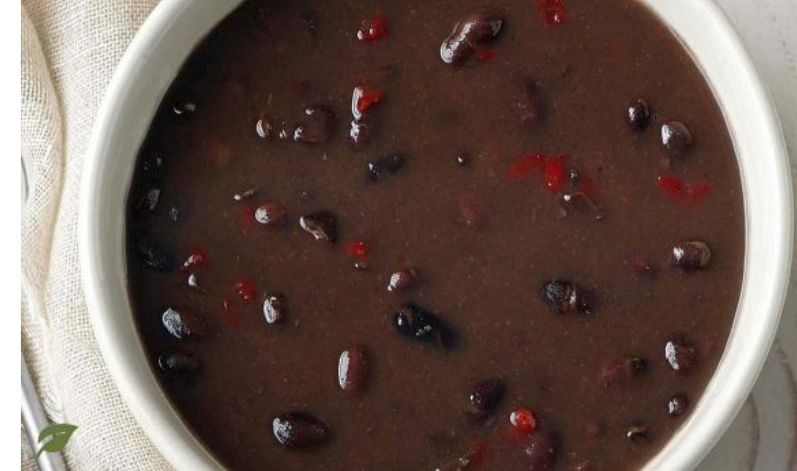 For example, a Panera Bread in Los Angeles decided to change the name of one of its soups to call out its provenance, resulting in a bump in orders. The restaurant switched the name of its “low-fat vegetarian black bean soup” to “Cuban black bean soup” in a month-long naming test in January 2018. The swap led to a 13% uplift in sales.

“It was an exciting result for us,” said Mindy Gomes Casseres, senior manager for corporate social responsibility at Panera. “By showcasing the dish’s origin, we were able to make the dish more appealing to guests. The new name conveys a well-seasoned and flavorful taste profile, and we think that’s what led to a sales increase.”

Leveraging a food’s source creates positive associations with the product, W.R.I. said. For plant-based foods, this may include the natural environment in which the ingredients are grown. In the Sainsbury’s test, changing the name of “Meat-free breakfast” to “Garden breakfast” and “Field grown breakfast” increased sales by 12% and 17%, respectively. At retail, plant-based food brands Field Roast, Garden Gourmet and Sweet Earth incorporate the link between their foods and the natural environment in their brand names.

Do focus on flavor

Spotlighting how a dish will taste automatically increases its appeal and “gets mouths watering,” W.R.I. said.

“When we started out, we were using more ingredient-specific names like ‘Black bean chili’ and ‘Beets bourguignon,’” said Alex Petrides, co-founder of Allplants. “But we’ve learned that names highlighting the delicious, distinctive flavors we use, such as ‘Smoky soul chili’ and ‘Fiery jerk jackfruit,’ are much more successful.” 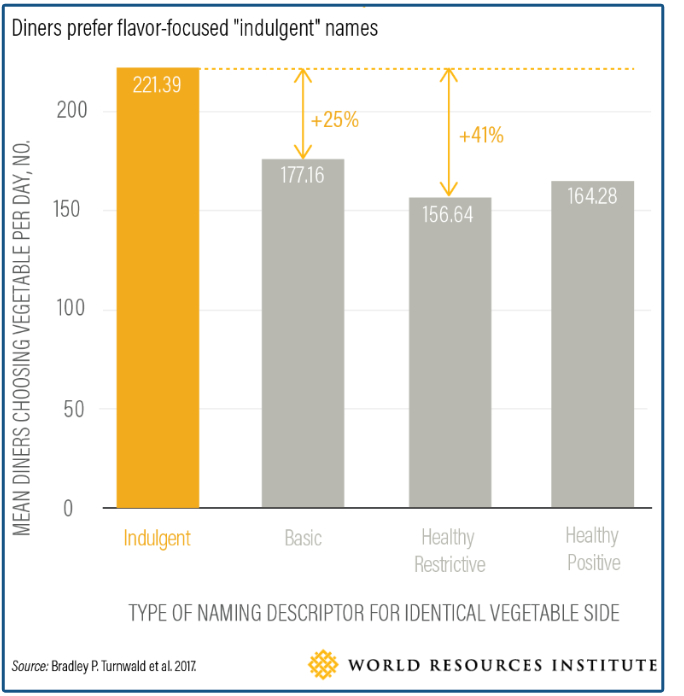 A 2018 Stanford study supports the idea that highlighting flavor increases sales of plant-rich dishes. Flavor-focused labels — referred to as “indulgent” in the study — such as “Rich buttery roasted sweet corn” and “Zesty ginger turmeric sweet potatoes” were chosen by diners 41% more often over identically prepared vegetables with healthy restrictive labels and 25% more often than those with basic labels.

“Flavorsome ingredients, flavor-enhancing cooking methods or an interesting combination of flavors can all communicate an attractive flavor profile,” W.R.I. said. “Many classic meat-based dishes use this well. Think of Moroccan-spiced lamb, slow-roasted beef brisket or sweet-and-sour chicken. Flavor-packed language could be a strategy that increases the sensory appeal of plant-rich dishes to be as high or higher than meat-centered dishes.”

Do emphasize look and feel

Look and feel drives appeal, W.R.I. said, and descriptors referencing appearance and mouthfeel may make all the difference.

Color is the single biggest cue consumers use to set their expectations of what a food will taste like, W.R.I. found, and emphasizing the color variety in a food may result in sales increases. For example, “Rainbow salad” creates an expectation of a fresh, flavor-packed and visually vibrant dish.

“Using language such as ‘melt in the mouth’ is associated with high-fat food and, for many consumers, is positively received and can therefore overcome prejudices that plant-rich food is boring, bland and not tasty,” W.R.I. said.

Restaurants and food manufacturers may consider using terminology such as creamy, warming, crunchy, smooth and sticky to communicate mouthfeel.