We use cookies to provide you with a better experience. By continuing to browse the site you are agreeing to our use of cookies in accordance with our Cookie Policy.
Home » New Product Pacesetters capitalize on healthy indulgence

CHICAGO — Indulgence and how consumers define what is healthy are two trends that stand out in the food and beverage products leading Information Resources, Inc.’s annual New Product Pacesetters report. The top 5 items that led the industry in total year-one dollar sales in 2018 include the Ferrero Group’s Kinder Joy, Mars’ M&M’s Caramel, General Mills’ Oui by Yoplait, Gatorade Flow from PepsiCo, and the Kellogg Co.’s RXBAR.

“The majority of 2018 New Product Pacesetters addressed at least one of the overriding themes we’ve observed over the past few years,” said Joan Driggs, vice-president of content and thought leadership for I.R.I., a Chicago-based market research company. “They’re upping the consumer experience, delivering against expectations and addressing simplicity, either with ingredients, convenience or sustainability.”

At first glance, many of the leading New Product Pacesetters appear to eschew health for indulgence. But Ms. Driggs said the results show how consumers are owning their own health and wellness.

“At the end of the day they want a treat,” she said. “Statistics we have now show consumers are balancing the products they choose against their overall health and wellness.”

A separate annual consumer survey conducted by I.R.I. showed that when asked “Which of the following best describes your attitude toward eating?,” 38% of respondents chose “I eat healthy about half the time, and eat whatever I want the other half of the time,” up 2% from 2018. Those consumers who said they eat healthy about 80% of the time and allow for indulgence 20% of the time was 35%, a one-percentage-point decline from 2018.

“A solid one-third of the respondents said they are willing to eat healthy half the time and indulge half of the time,” said Larry Levin, executive vice-president of market and shopper intelligence for I.R.I. “Why is Kinder Joy No. 1? Sustainable happiness. This is a phenomenal story. This category did not exist until Ferrero brought Kinder to the U.S.”

Ms. Driggs emphasized health and wellness attributes also are embedded in some of the top 10 Pacesetters. 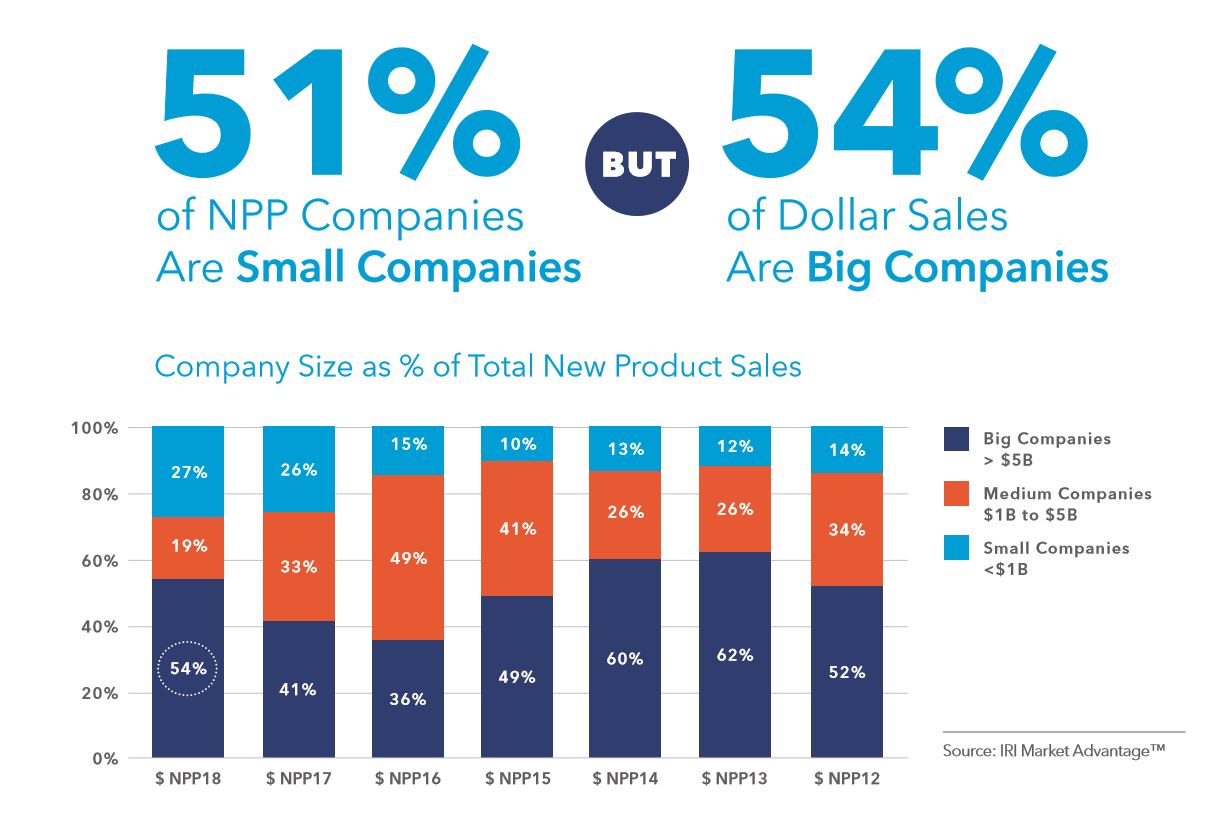 “If you look at Lay’s Poppables, that’s a familiar chip brand in a healthier format,” she said. “The same with Ritz Crisp & Thins. The product has a healthier profile than its traditional counterparts.”

The success of Oui by Yoplait and Kellogg’s RXBAR also shows that consumers remain interested in products they perceive as clean and simple, Mr. Levin said.

Another trend highlighted in the Pacesetters report is the decline in average product sales. Food and beverage products included in the 2012 New Product Pacesetters averaged in excess of $40 million in sales. In 2018, the average has fallen to less than $25 million. Total Pacesetters sales dollars (for all product introductions tracked) declined between 2012 and 2018 by $3.4 billion, according to I.R.I.

“Part of it is better targeted innovation,” Mr. Levin said. “Manufacturers are not trying to be all things to all people. We are no longer seeing these big innovations, because the products are not being made to satisfy everyone.”

Ms. Driggs said that for the first time in the 23 years I.R.I. has been publishing the New Product Pacesetters report, 51% of the products tracked by I.R.I. are from companies with less than $1 billion in sales. Big companies, those with sales of more than $5 billion, accounted for 22% of new product launches.

“The biggest companies still have the majority of dollar sales,” Mr. Levin said. “But this is a trend we’ve been seeing for a while. We are seeing a plethora of innovation from smaller companies, and it is winning.

“Part of it is smaller companies may have a better connection with consumers, especially millennials and Gen Z. They also may be better at telling brand stories that attract consumers.”