We use cookies to provide you with a better experience. By continuing to browse the site you are agreeing to our use of cookies in accordance with our Cookie Policy.
Home » Vegetables see mixed changes in processed, fresh markets

WASHINGTON — Lower harvested area and yields pushed fresh vegetable production down 10% last year, to 35.9 billion lbs, the lowest in 19 years and the largest year-over-year drop during that time, the U.S Department of Agriculture said in its Vegetables and Pulses Outlook. In contrast, 2018 production of processing vegetables was estimated at 35.7 billion lbs, up 7% from 2017.

Fresh vegetable prices declined about 5% in 2018 “in spite of lower domestic supply and slightly rising exports, which should put upward pressure on the price,” the U.S.D.A. said.

“Two foodborne illness outbreaks occurred in 2018, substantially slowing the market for fresh leafy greens,” the U.S.D.A. said. The four largest price drops were 31% for romaine lettuce, 16% for head lettuce, 15% for leaf lettuce and 14% for spinach.

Production of most processing vegetables declined in 2018, but the total was skewed by a 17% increase in tomatoes (technically a fruit), to 25.6 billion lbs, which accounted for 75% of processing vegetable production. Tomato production fell sharply in 2017 due to drought in California and high carry-in stocks from 2016, the U.S.D.A. said. 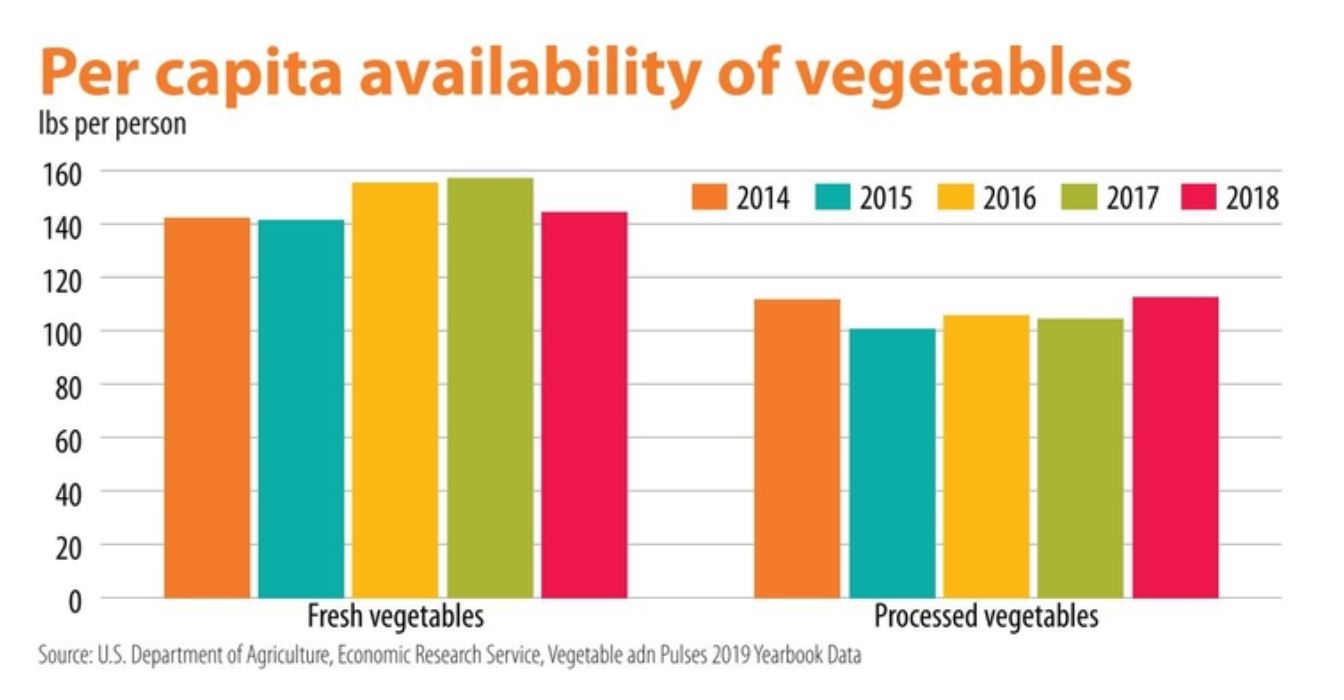 Prices for processed vegetables increased about 11% from 2017 but were down 6% from 2016, the U.S.D.A. said, “despite increased domestic supply and slowing export volume, which should put downward pressure on the price.”

Per capita (domestic production and imports) availability of fresh vegetables (excluding mushrooms, potatoes and sweet potatoes) was 144.8 lbs in 2018, down 8% from a year earlier, and totaled 183.8 lbs when all items were included, down 9%, the U.S.D.A. said. It was the largest annual decline on record. Of the 24 fresh items included in the total per capita availability list, 15 declined, 8 increased and 1 (mushrooms) was unchanged. The largest declines were sweet potatoes (31%), squash (22%) and head lettuce, romaine/leaf lettuce and bulb onions (19% each). The largest increase was carrots (16%).

“The United States has experienced an increasing trade volume deficit in total vegetables since 2001,” the U.S.D.A. said. “Based on early trade data, 2019 seems poised to fall behind 2018 vegetable trade levels for imports.”