We use cookies to provide you with a better experience. By continuing to browse the site you are agreeing to our use of cookies in accordance with our Cookie Policy.
Home » Taking advantage of technology at retail

Taking advantage of technology at retail

ORLANDO, FLA. — Technology is playing an ever more important role in instore deli and bakery departments, but the employees who really make those departments shine aren't going anywhere.

That was among the messages delivered by Mike Eardley, president and chief executive officer of the International Dairy-Deli-Bakery Association (I.D.D.B.A.), during his annual address at the association's convention June 2-4.

“Our departments have traditionally lagged behind in the application of technology,” Mr. Eardley said in the June 3 speech.

He quickly added, “That’s not necessarily a bad thing.” Focusing on products and people instead of the latest gee-whiz gadget often has served the industry quite well.

But those days are over.

“A rapidly changing consumer environment no longer allows that to be the case,” he said. “Everyone has a computer in their pocket. Click-and-collect was up 65% in the fourth quarter compared to a year ago.”

Mr. Eardley touted DecoPac’s cakes.com mobile technology product, which he believes will help improve some of the “suboptimal” ways in which online orders are placed in instore departments.

The digital ordering cake marketplace cakes.com provides not only delivers value at the point of sale, Mr. Eardley said. It also creates a relationship with the customer and a reservoir of data that can be tailored for future sales. 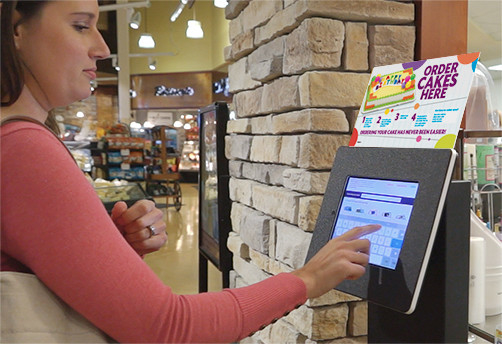 For instance, if someone orders a birthday cake for a loved one, 11 or so months later, cakes.com can automatically send a message reminding the consumer of the person’s next birthday. Or it can connect the customer to other goods and services that can make their next celebration even better — beyond the cake itself.

Other technologies Mr. Eardley discussed in his address that could impact the supermarket perimeter included FedEx’s new robot delivery service and a venture by four MIT graduates, Spyce, that combines robotic cooking with human cooking in restaurants.

Robotics can take many of the time-consuming, repetitive, physically hard jobs currently done by humans, as Mr. Eardley pointed out, leaving the more creative parts of the cooking process and the customer service to those best suited for those tasks — human beings.