We use cookies to provide you with a better experience. By continuing to browse the site you are agreeing to our use of cookies in accordance with our Cookie Policy.
Home » Food Entrepreneur: Startups use crowdfunding to raise cash and test ideas

KANSAS CITY — Entrepreneurs are embracing crowdfunding as a low-stakes opportunity to raise capital while testing and refining new product concepts. On crowdfunding platforms Kickstarter and Indiegogo, food startups recently highlighted concepts such as vegan pastries and halal beef jerky, hoping to raise thousands of dollars to transform the prototypes into products. In exchange for a donation, backers were promised samples, merchandise and other incentives.

“Crowdfunding is like having a free focus group on which to try out all your great/crazy ideas and find out which ones are most appealing to consumers,” said Nancy Kalish, founder of Rule Breaker Snacks, New York.

Rule Breaker Snacks produces vegan, gluten-free packaged brownies and blondies. The company created a Kickstarter campaign last March to develop and commercialize a new line of bite-size treats, formulated with ingredients such as chickpeas and dates.

“We definitely needed the money to help launch a new line,” Ms. Kalish said. “But by the time you fulfill the rewards and pay Kickstarter their fee, you don’t get to keep most of the cash. I knew that going in. So, I looked at it as more of a marketing effort to generate buzz for free.”

Rule Breaker Snacks initiated the campaign with a goal of $10,000, “which we reached in under three hours,” Ms. Kalish said. By the end of the three-week period, a total of 403 backers had pledged $28,403 to support the production of Rule Breaker Bites.

“We offered our backers a variety of rewards, lots of bags of Rule Breaker Bites, depending on how much they pledged, as well as rewards featuring our grab-and-go products that were already on the market,” Ms. Kalish said.

Crowdfunding offers benefits beyond traditional fundraising. Startups may validate businesses and products, grow brand awareness and gain a loyal following of early adopters and advocates. Kickstarter and Indiegogo are examples of rewards-based crowdfunding sites, providing perks to contributors in exchange for money. Through the equity crowdfunding model, founders on such platforms as StartEngine and Republic sell ownership stakes to investors. A regulatory framework was established for startups and small businesses to raise capital through crowdfunding under the Jumpstart Our Business Startups Act (JOBS Act) enacted in 2012.

“Folks are going to be turning to not only Kickstarter but some of the more equity-focused platforms,” he said. “I think some brands that are later-stage that aren’t launching but are just trying to survive if the venture capital climate dries up might turn to some of those equity sites.” 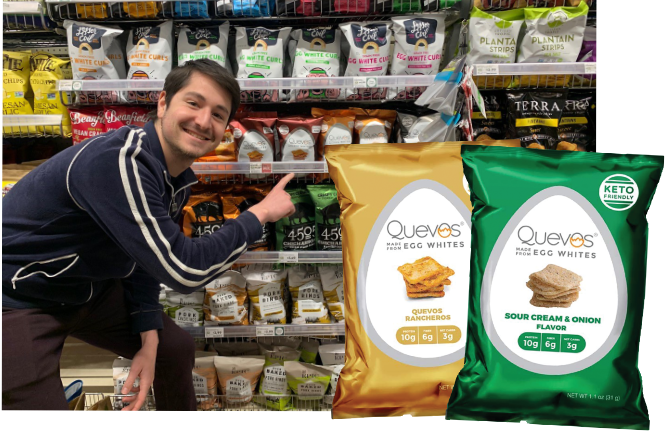 His business Quevos manufactures egg white crisps featuring flavors such as cheddar, sweet barbecue and sour cream and onion. The product was presented in a Kickstarter campaign last year as Mr. Hamburger and co-founder Zack Scheier prepared to expand production of the snacks following a brief market test. The prior year, Quevos had raised a total of $65,000 through participation in a business contest at the University of Chicago and the Kraft Heinz Co. accelerator program.

“We had a little bit of capital, we had improved our product and formula from the test, and now we needed to scale up our manufacturing,” he said. “We’re in a pretty unique situation where we make the product ourselves because our process is unique. We’d been able to produce 10,000 bags a month, and we wanted to scale and make closer to 100,000 a month.

“We knew we needed a few months to install a few pieces of equipment and build out our production space. As we were in this pause while we were expanding capacity, we thought, what can we do to generate buzz and sales? That’s why we went to Kickstarter.”

A total of 1,585 backers pledged $71,786 to Quevos’ Kickstarter campaign, surpassing the initial goal of $10,000 in two hours. Rewards offered included bags of the product and T-shirts.

“It’s pretty easy to make a campaign,” Mr. Hamburger said. “It’s much trickier to get people to actually come to your listing. We had consulted with a lot of other brands … two other entrepreneurs who had done it before us … they said you’ll get a little traffic within Kickstarter, but you need to find a way to bring people in.

“Your network, your email list, your friends and family, if you can get any articles written about you or influencers posting about it. We did a bunch of that stuff to maximize how many people we told about it.”

Established companies also are dabbling with crowdfunding as a go-to-market strategy. Last October, Tyson Foods, Inc., Springdale, Ark., introduced Pact, a brand of refrigerated functional snacks, through an Indiegogo campaign, with the goal to collect feedback prior to a broader rollout.

"It’s pretty easy to make a campaign. It’s much trickier to get people to actually come to your listing." —  Nick Hamburger, Quevos

The Coca-Cola Co., Atlanta, created a campaign on Indiegogo to gauge US interest in Valser, a mineral water brand from Europe. The company exceeded its crowdfunding target of $10,000 for the one-month campaign.

“Given how rapidly consumer tastes are changing, our team is challenged with taking risks, testing, iterating and cycling through ideas quickly to see what works,” said Dave Preston, vice president of innovation for Coca-Cola North America. “We saw Indiegogo as an opportunity to quickly get Valser out there and see if there is a demand.”

Other consumer packaged goods companies including Procter & Gamble and Heineken have used the platform as a new approach to product development, said Slava Rubin, founder and chief business officer of Indiegogo.

“Innovation teams are now using pre-order transactions as a new kind of real-world validation to learn what people actually want and using those insights to decide which amazing new products to bring to market,” he said.

Even during a global health emergency, traffic and funding activity have remained steady on Kickstarter and Indiegogo. Widespread lockdowns caused by the coronavirus crisis may be prompting consumers to buy more products online, in spite of economic uncertainty. 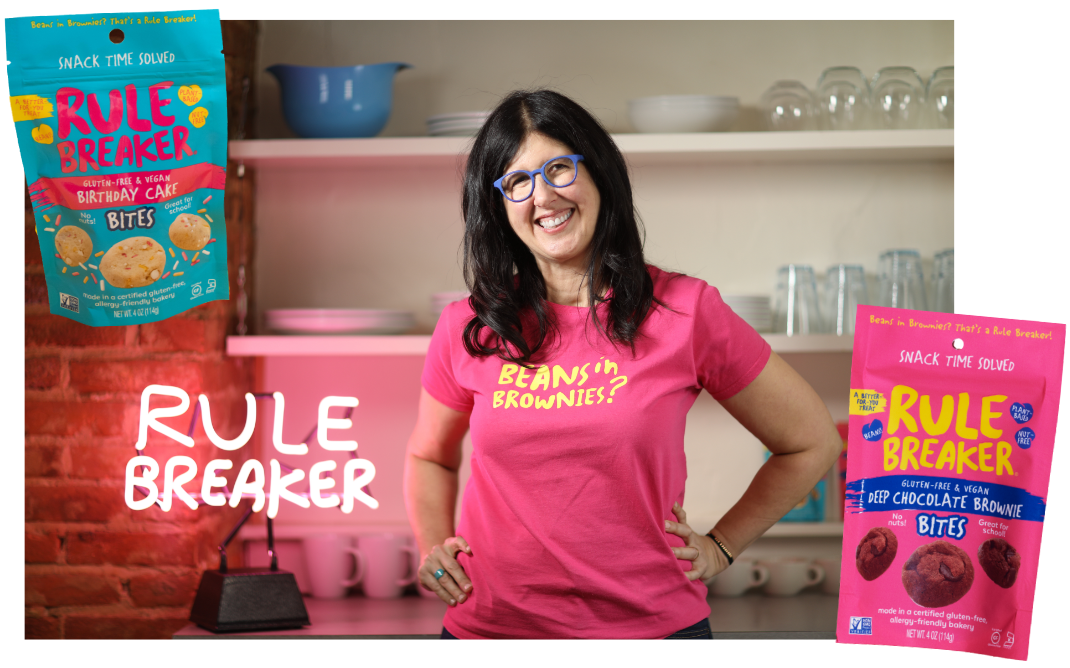 During the second half of March, Indiegogo traffic increased nearly 14% over the year-ago period, and daily funds raised on the platform increased 24% over the prior year. On Kickstarter, overall traffic and fundraising were in line with pre-pandemic levels; however, the number of projects had decreased by 25% from the same period a year ago.

“While we have seen a drop in launched projects, overall live projects are getting funded,” said Kate Bernyk, director of communications for Kickstarter. “Food projects included.”

The food category typically represents about 4% of overall successful projects on Kickstarter, she said, and may include food trucks, cooking tools and appliances, and cookbooks, in addition to packaged food and beverages.

Founders launching a crowdfunding campaign should factor the costs and timing of producing and shipping rewards and set fundraising levels and expectations accordingly, Ms. Kalish of Rule Breaker Snacks said.

“If you’re not careful, your campaign could end up costing you a lot of money,” she said. “Figure out when you think you can deliver the rewards and add at least three months to it. Since we already produced a similar item, we thought we’d have no trouble delivering on time. But it was packaged with a different method that didn’t work at first, and we ended up being months late — and having to explain and apologize over and over again to frustrated backers.”

"Crowdfunding is like having a free focus group on which to try out all your great/crazy ideas and find out which ones are most appealing to consumers." — Nancy Kalish, founder of Rule Breaker Snacks

“It took us a few months to scale things up, and there’s headaches on occasion if equipment breaks, different things will come up, and it’s a little more time and energy to manage it, but it’s awesome to have the flexibility to be able to hopefully protect our process,” he said.

Another benefit of the campaign was building a loyal base of consumers to drive awareness when the brand announces new products, he said.

“For instance, we just launched a new pickle flavor and sent an email to backers and offered a free sample pack to them and got tons of emails flooding in of people taking us up on that,” Mr. Hamburger said. “I think it does give you this nice loyal group of fans.”

This feature ran in the May 12 edition of Food Entrepreneur. Read the full issue here.