We use cookies to provide you with a better experience. By continuing to browse the site you are agreeing to our use of cookies in accordance with our Cookie Policy.
Home » On the verge of a plant-based boom

On the verge of a plant-based boom

SAN FRANCISCO — Recent data show more shoppers are opting for plant-based foods during the pandemic, and sales of meat alternatives are expected to accelerate as the nation faces temporarily tighter supplies of beef, pork and poultry. No Evil Foods, an Asheville, NC, producer of plant protein products, is bracing for the boom.

“If it can’t be made from start to finish in a home kitchen … you won’t find it in our products,” Sadrah Schadel, co-founder and chief creative officer, said of the company’s recipes, which include vegan variations of Italian sausage, chicken, pulled pork, roast turkey and chorizo.

Ms. Schadel, who launched No Evil Foods in 2014 with partner and chief executive officer Mike Woliansky, said the company saw “a really big jump in sales,” more than double what was projected, during the last two weeks of March, when Americans loaded pantries to prepare for lockdown.

The flexitarian movement has been building over the past couple years as environmental, health and animal welfare concerns prompt consumers to occasionally replace the meat on their plates with one of the many new plant-based products in the market. The trend has gained traction in recent months as meat processing plants temporarily closed due to worker illness and a connection is drawn between viruses and animal consumption.

Retail sales of plant-based alternatives formulated to replace conventional meat, dairy, eggs and seafood products surged by 90% in mid-March compared to the prior-year period, according to new data from the Plant Based Foods Association and SPINS. During the four weeks following the peak of panic buying, plant-based foods sales increased 27%, outpacing total retail food sales by 35%.

“Since the beginning of the pandemic, there has been a continued shift in consumer purchasing toward natural and organic products that enhance health and immunity,” said Tony Olson, owner and chief executive officer of SPINS, a Chicago-based data technology company. “Our data show the plant-based meat boom of last year continues, and as reports of animal-based meat shortages increase, we can expect plant-based meat to gain even more traction.”

Plant-based cheese retail sales spiked at 95% and continued to grow at 54% in the four weeks following mid-March. Retail sales of tofu and tempeh also showed strong gains, peaking at 88% and settling into a four-week growth rate of 35% over the respective periods. 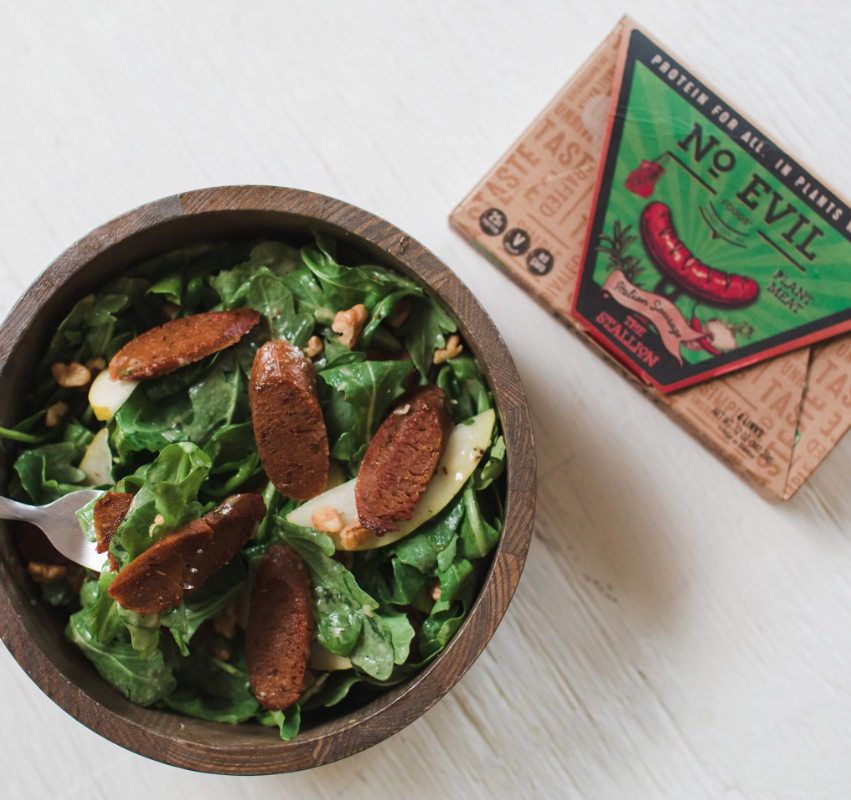 “These strong numbers prove that the plant-based industry is here to stay and will only continue to grow,” said Michele Simon, executive director of the Plant Based Foods Association. “PBFA members and their staff are working hard to provide consumers with nourishing foods during these difficult times and beyond.”

Since the onset of the pandemic, No Evil Foods has expanded its team and is investing in production capabilities to improve efficiency and reduce costs with the goal to lower prices and increase accessibility, Ms. Schadel said. The company also is accelerating the launch of plant-based jerky, its first shelf-stable item, which was set to debut next year, with an eye to expanding in the e-commerce channel as more shoppers buy groceries online.

Following the cancellation of Natural Products Expo West in early March, No Evil Foods donated hundreds of pounds of product intended for the trade show to food banks and animal activists at a pig vigil near a slaughterhouse in Vernon, Calif.

“Vegan businesses are more important than ever,” Ms. Schadel said. “The spotlight on plant-based meats is growing… We want to be there for consumers when their eyes drift to a different part of the store. They can have the same meat experience without compromising what they love about meat.”