We use cookies to provide you with a better experience. By continuing to browse the site you are agreeing to our use of cookies in accordance with our Cookie Policy.
Home » Clean-up in the frozen breakfast aisle

Clean-up in the frozen breakfast aisle

CHICAGO — A top trend for next year in Whole Foods Market’s recently released forecast is upgraded breakfast products, as many people continue to work from home and have more time to linger over a morning meal. That’s great news for Emily Groden, a lawyer-turned-entrepreneur who launched her frozen waffle business at the beginning of the pandemic.

Her brand, Evergreen, features miniature waffles made with 100% whole wheat, no refined sugar or dairy, and flavored only with fruits, vegetables, nuts or spices. Varieties include banana peanut butter, mixed berry almond, matcha chocolate chip, zucchini and carrot, and pumpkin and pecan. The products are available to purchase online and in Whole Foods stores throughout the Midwest.

How does a former college athlete, Harvard Law-educated general counsel of a major restaurant group and mother of a newborn one day decide to take on a supermarket behemoth (whose name rhymes with Lego)?

“I was driving home from work one night in late 2017, I was listening to a food podcast talking about the frozen breakfast market — how large it is and how one really well-known frozen waffle brand is still so dominant. I found myself asking why? Why hasn’t anyone come in and really disrupted that market yet?” Ms. Groden said. “I got home and Amazon Primed a mini waffle iron and immediately started casually playing with recipes on nights and weekends.”

By the following November, the end of her maternity leave nearing, her hobby had bloomed into a full-blown business idea. She reduced her hours at the restaurant group to part-time, hired a design firm to create packaging for her product, and began producing batches and batches of waffles in a shared commercial kitchen.

“I took the first batch of waffles I made, I stuffed them into a duffel bag, and I had another duffel bag I stuffed with my household toaster, maple syrup, 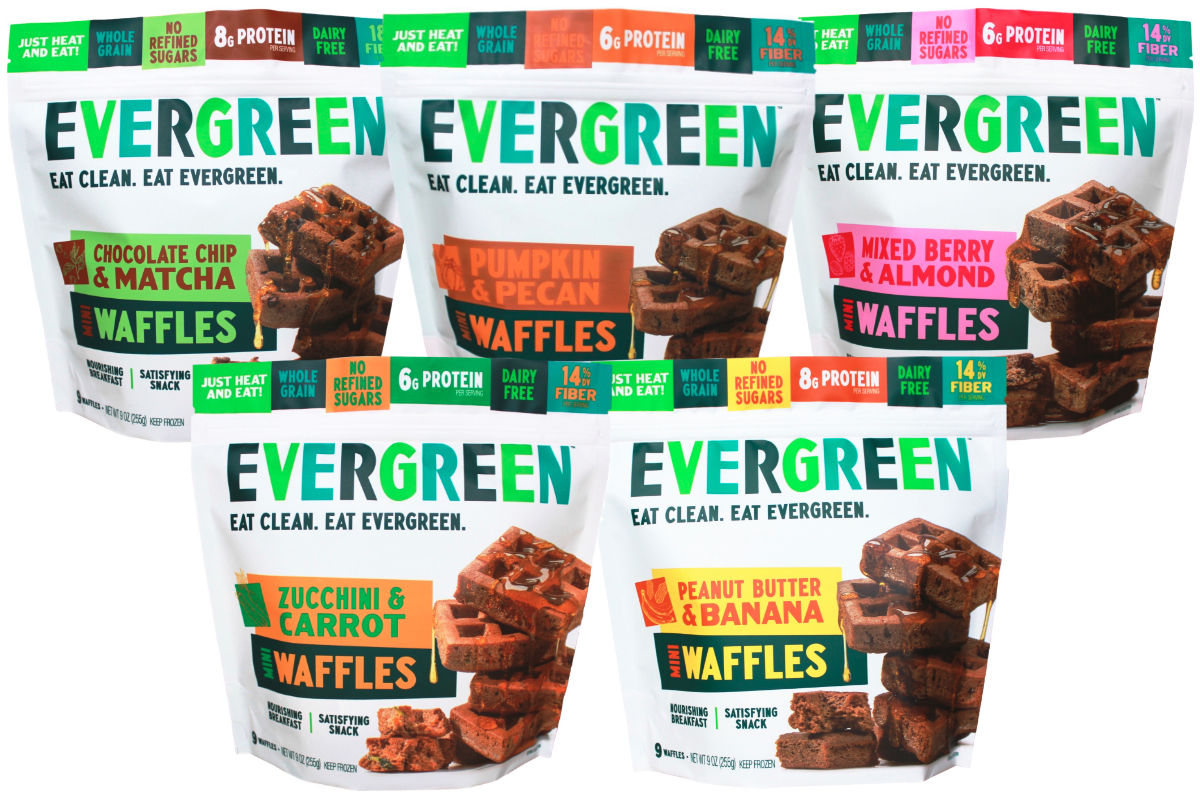 paper plates and plastic utensils, and I walked into my favorite corner store in Chicago and told them, ‘I make frozen waffles. As someone who shops here, I think they’d be a great fit. Would you like to try them?’

“And they brought me back, and I toasted them up some waffles, and they tasted them and bought them on the spot. That was my first sale. That gave me the courage to apply as my second sale to be a local vendor at Whole Foods. What’s the worst that can happen? If I don’t get accepted, I’ll just apply again next year. And I was very excited to learn I was accepted about a month after I applied.”

She launched Evergreen into all 28 Whole Foods Market stores in Illinois the second week of March. Right when the coronavirus began spreading in the United States.

“Yeah, very interesting timing,” she said. “Sales were good enough right out of the gate that I was given the green light by Whole Foods to expand to the rest of the Midwest. We are now sold in 46 Whole Foods across the Midwest region. I launched my e-commerce business the beginning of this year just before launching at Whole Foods. I wanted to start to build a national presence. I started working with an influencer with a real national presence so I wanted to be able to get them to people outside of the Midwest.”

In a recent interview, Ms. Groden discussed early challenges she has faced and her long-term plans for dominating the frozen food aisle.

Food Business News: You offer some interesting flavor combinations. How did those come about?

Ms. Groden: When I started doing research on the frozen waffle market, it struck me that the flavor profiles were kind of stale. Every brand seemed to have an original, a blueberry, a multigrain, a chocolate chip, but there wasn’t really anything outside of that.

I also knew that toddlers, who were going to be eating lot of the frozen waffles, are tough food critics, so Evergreen had to be really delicious, and on top of that, I didn’t want toddlers to be the only ones eating these waffles. I wanted them to appeal to the parent who was buying them for the toddler, or to the college student who wanted something healthier than what he or she could find in the cafeteria, or to the athlete who wanted to fuel or recover using Evergreen. I wanted to spice up the flavor profiles that you’re finding in the frozen breakfast aisle.

The waffles have 6 to 8 grams of protein and 4 grams of fiber per serving. Was that by design or a result of the ingredients you used?

Ms. Groden: That was a happy surprise. I had no idea when I sent off my recipes to a food lab to generate our nutrition panel and they sent that back, I couldn’t believe it. It’s the happy byproduct of creating a product that is full of really nutrient dense ingredients from whole grain flour, egg, almonds, fiber from fruits and vegetables, so it makes sense but it certainly wasn’t what I was aiming for.

At the end of the day, this is the waffle that I wanted to give my daughter.

How did you choose the name?

Ms. Groden: Evergreen has a number of meanings. First, I think it evokes green, fresh, fruits, vegetables. I think Evergreen is kind of a fun play on the tree stays green and vibrant through the frozen months, so a frozen product that incorporates fruits and vegetables and is nutritious and fresh. The meaning that’s most important to me is evergreen is not a trend, not a fad, long lasting. For me, I think of Evergreen as an anti-trend brand. I don’t personally subscribe to fad diets like keto or paleo. I know a lot of people do, and that’s totally fine, but I didn’t want Evergreen to be focused on one of those diets. I wanted it to be a brand that uses ingredients that have stood test of time.

How has the pandemic affected your business? 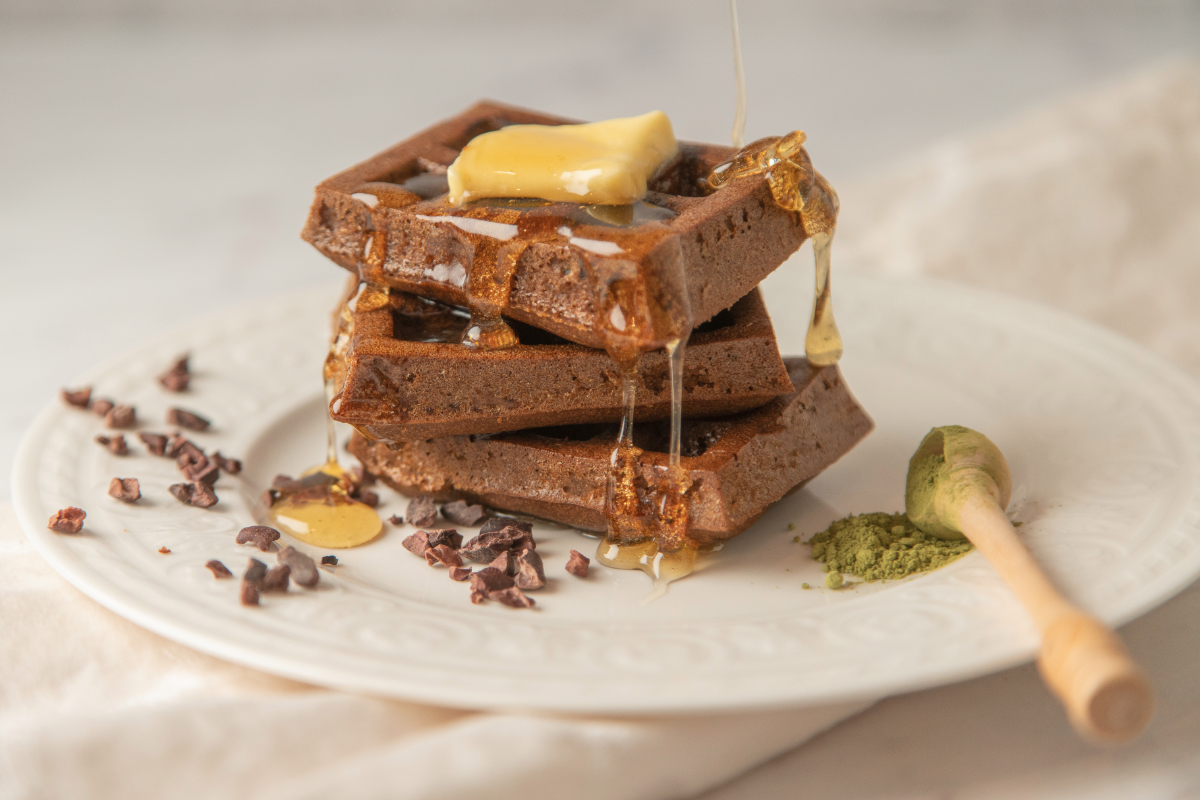 At the same time, Evergreen was on shelves in some stores during that initial rush on grocery stores at the very beginning of quarantine, so I’m sure we did reach new customers that maybe wouldn’t have thought to grab Evergreen off the shelf but were stocking up on frozen products at that time.

At the end of the day, I don’t know whether we ended up ahead or behind, but I do know I’m grateful that I was able to launch at all in March. Sometimes I wonder if my timeline was shifted back a few weeks, would it have happened?

What is your long-term vision for the business?

Ms. Groden: I just quit my job as a lawyer two months ago. I had been working on this two days a week until the beginning of August. Up until that time I felt my two days a week were spent making sure I was making enough waffles to fulfill Whole Foods orders and not much else. It’s amazing how much time you have when you have five days a week instead of two.

For right now I’m focused on waffles and getting them into as many hands as possible. My ultimate goal is to clean up the frozen aisle. There’s so much opportunity in frozen because you don’t need the additives and preservatives you need to make other products shelf stable, and so you can really clean up products.

I like to say for Evergreen the only preservative we use is the freezer. There are so many products in the frozen aisle that are still full of “extras” that could use some cleaning up that I would love to attack once waffles are underway.

What is your advice to other food entrepreneurs?

Ms. Groden: One of the most helpful things for me has been surrounding myself with other food founders. I have been super fortunate in the last two months … to meet virtually on calls and Zoom a number of other food founders. I was struck by a couple things. One, just how incredibly generous people have been with their time and knowledge. It’s been so helpful to talk to them and learn the challenges I’ve faced aren’t unique to Evergreen. Before talking to them and never having talked to anybody, I kind of assumed that I was doing something wrong.

"I would say to any food founder, find your network, reach out to people, and you’ve got to pay that forward." — Emily Groden, Evergreen

For example, this summer shipping a frozen product was difficult. There was a dry ice shortage. There have been many carrier delays. So there has been more than one package of frozen waffles that have shown up on someone’s doorstep that are no longer frozen, and I felt I must have  chosen the wrong corrugate or insulation layer or I did something wrong along the way, but then I talked to another frozen food founder a month ago, and she was like, “Oh, yeah, our product shows up melted with some frequency. It’s not just you.”

It brought me so much comfort to know it wasn’t just me. So, I would say to any food founder, find your network, reach out to people, and you’ve got to pay that forward. I’ve had a number of phone calls with food founders who are a couple steps behind me, and I always take those calls just because I’m so grateful for the time that people a few steps ahead of me have given me.