We use cookies to provide you with a better experience. By continuing to browse the site you are agreeing to our use of cookies in accordance with our Cookie Policy.
Skip To Content
Home » Chew innovation lab strives to ‘democratize good food’

BOSTON — Adam Melonas is respectfully tightlipped about the work underway at Chew, his food innovation lab, where a team of chefs, scientists and manufacturing experts has developed more than 3,500 products and co-authored more than 40 patents or patents pending, generating over $4 billion in market value in the past seven years.

To illustrate the company’s commitment to confidentiality, Mr. Melonas said he has passed on at least 25 partnership opportunities because the prospective client requested references that Chew refused to disclose.

“For me, trust is worth more than any contract we could possibly sign,” Mr. Melonas said.

An Australian chef and culinary consultant, Mr. Melonas founded Boston-based Chew on the mission to “democratize good food,” which he defined as food that contains no artificial ingredients and a low yet acceptable sugar content. See also: Anything he is willing to feed his three children.

Clients range from pre-revenue startups to multinational companies with tens of billions of dollars in annual revenues, Mr. Melonas said. He has architected an approach to product development that challenges traditional expectations and processes.

“I hate the word ‘innovation.’ I think it’s used and abused, and ... I don’t think anyone understands what it is.” — Adam Melonas, Chew

“I hate the word ‘innovation,’” he said. “I think it’s used and abused, and I think like most jargon inside most industries I think it’s just frankly been bastardized to the point where I don’t think anyone understands what it is.”

His team employs a process that begins with gathering insights based on a proprietary collection of data not used by the industry at large. As opportunities are identified, the team may produce hundreds or thousands of iterations to develop a market-ready product while sourcing materials and ingredients to ensure the concept can grow.

“Our five principles of the company are very simple… Delicious, nutritious, sustainable, profitable, scalable,” Mr. Melonas said. “And we say, ‘Fail one, fail all.’”

Recently, the business has seen significant momentum, Mr. Melonas said, adding the year ahead is shaping up to be one of the lab’s best.

“You’ve got this interesting tension in the marketplace right now where the big brands are thriving, the small brands are being decimated, and … there’s a vacuum right now of new news,” he said. “What we’ve started doing with some of our larger partners is we’ve been helping them revitalize, bring back some new news to their iconic billion-dollar brands. Most of those big brands will take anything from two to three years from idea to something that’s 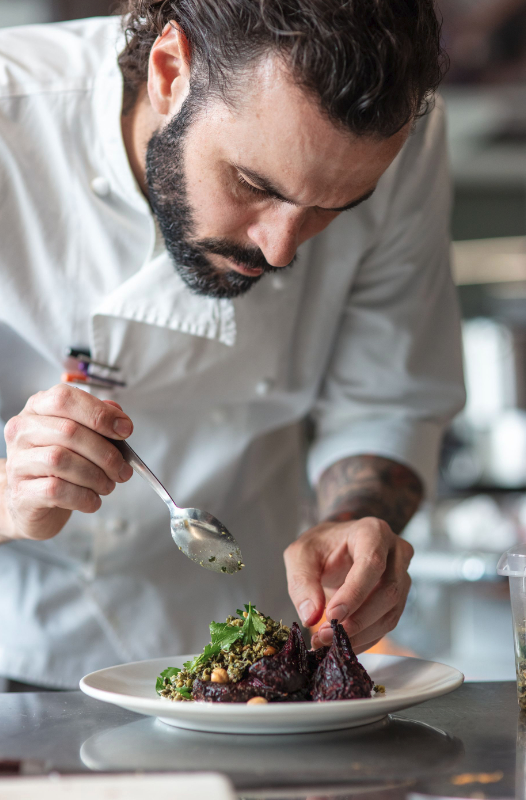 ready to be executed in market, and that’s not going to be fast enough, so we’re helping fast track a lot of that. Plus, we’re starting to think about how those brands can stretch to adjacent categories to capture more of that pent-up demand.”

Mr. Melonas draws from a globetrotting career of fine-dining experience at restaurants in London, Dubai, Shanghai and Madrid. He also collaborated with Swedish retailer Ikea, developing menu items for its cafes in Spain to please local palates. He later became co-founder and the product developer behind Unreal Candy, a range of popular confections without corn syrup, partially hydrogenated fats and artificial ingredients commonly found in conventional treats. Outside of Chew, he is a mentor for the Harvard University Innovation Lab and a senior fellow at Babson College.

Trends he sees emerging in the marketplace include immunity claims, cannabinoids and a continuation of online grocery shopping. He also identified areas of opportunity for food and beverage manufacturers, including more palatable plant-based offerings and a reinvention of several staple categories.

“Most of the spaces that have been around since the industrial revolution — sweet biscuits, cereals, sugar-sweetened beverages … I think they’re all ripe for disruption,” he said.