We use cookies to provide you with a better experience. By continuing to browse the site you are agreeing to our use of cookies in accordance with our Cookie Policy.
Home » Siete Family Foods co-founder reflects on first seven years

AUSTIN, TEXAS — Siete Family Foods, maker of Mexican-American meal and snack products, kicked off its seventh year in business with a slate of new innovation spanning several categories. Since launching its first grain-free tortilla in 2014, the company has catapulted to $150 million in retail sales with a platform of heritage-inspired, wellness-driven products across the grocery store.

Siete Family Foods was founded by brother-and-sister team Miguel and Veronica Garza and their mother, Aida. Veronica Garza, who had been diagnosed with multiple autoimmune conditions, had adopted a low-inflammation, grain-free diet to manage her symptoms but missed eating tacos and fajitas, the culinary staples of her family’s culture. Experimentation in the kitchen led to the development of an almond flour tortilla, an instant hit among friends, family and the Hispanic community.

“We didn’t necessarily see a brand in the marketplace that was really representative of who we are, a third-generation Mexican-American family from south Texas,” Mr. Garza, chief executive officer, told Food Business News. “I think it’s important in understanding what we’re actually trying to build, and it’s a company that is built on our values.”

The company has since expanded into grain-free tortilla chips and taco shells, hot sauces and enchilada sauces, seasonings and dairy-free queso based on cashews. The products are made with ingredients such as cassava flour, coconut sugar, apple cider vinegar and avocado oil.

“We didn’t necessarily see a brand in the marketplace that was really representative of who we are, a third-generation Mexican-American family from south Texas.”
— Miguel Garza, Siete Family Foods

Last fall, the company launched an online platform, Siete Small Batch, to test new concepts prior to a broader rollout. Products introduced there include grain-free Mexican chocolate cookies, Mexican wedding cookies and Mexican shortbread cookies, which have since begun appearing on shelves at Sprouts Farmers Market and Whole Foods Market.

“Growing up we would eat cookies — we called them hojarascas — and they’re a Mexican shortbread cookie,” Mr. Garza said. “My grandmother would make them for special occasions… We had this nostalgia around this flavor and type of cookie we grew up eating. Similar to our other products, there was this inspiration from heritage to launch an item that we thought would benefit the category and the consumer.”

A new line of kettle-cooked potato chips is inspired by papitas sold at Mexican markets. Varieties include sea salt, chipotle barbecue, sea salt and vinegar with a hint of serrano, and a spicy flavor, Fuego, featuring a blend of chile, tomato, jalapeño and garlic.

“The story there is growing up we would go to street fairs or mercados, and there would be carts serving these clear bags of potato chips topped with hot sauce and lime juice and different toppings,” Mr. Garza said. “The flavor was really robust and added to this potato chip. We wanted to bring that experience, or that nostalgia, to the snacking aisle. We thought the way we could do it was to take a potato chip and instead of using another kind of oil, use avocado oil, and then add different flavors than what may be on shelf right now but also familiar flavors.”

Other new launches this year include a chorizo skillet cooking spice, a carnitas slow cooker spice and grain-free churro strips.

In a recent interview, Mr. Garza discussed the latest products, lessons learned in the first seven years of business and his hopes for the next seven years and beyond.

Food Business News: How do you think about future product development? 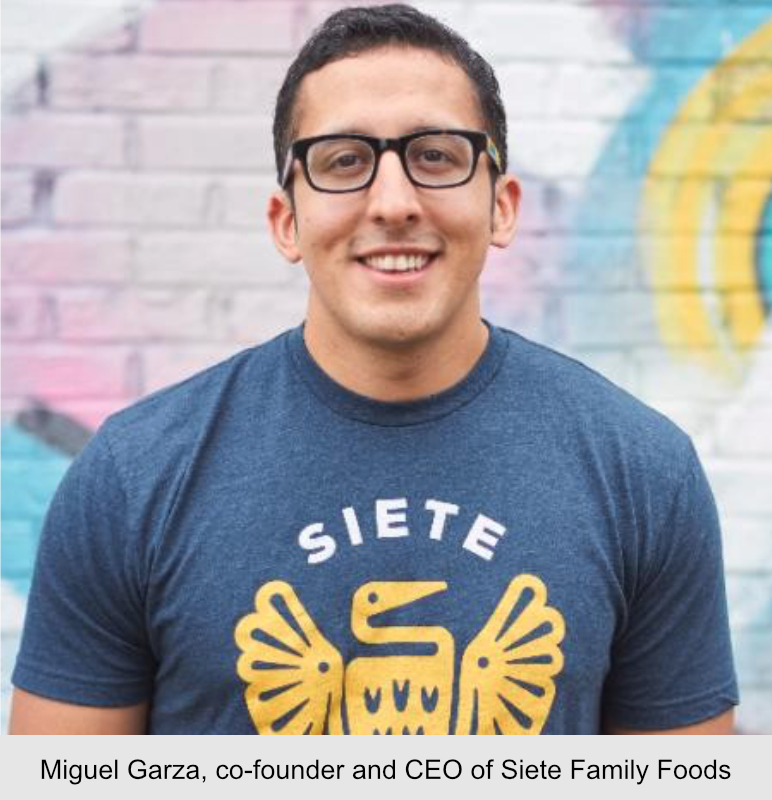 Miguel Garza: The mandate is still if my sister won’t eat it, then we’re probably not making it.

The way I view what we’re trying to do it is health aspirational. What I mean by that is, if you’re limited by some sort of codification of ingredients, then it doesn’t allow you the flexibility to continue to learn and understand how different ingredients or products may affect you.

Today we are grain-free, dairy-free in the products we bring to market, but I would say the actual guardrails today are we are a Mexican-American food brand trying to bring clean ingredient products to market, and we’re trying to make sure to continue to solve problems for our consumer.

How did you come up with the idea for Siete Small Batch?

Mr. Garza: We wanted to create a platform where we can have permission to more quickly test and iterate and engage the consumer and not have to rely on reset schedules or even risking retailer relationships. Retailer shelf space is very valuable, so as we’re launching items, we should really have data and conviction that our consumer is going to want those items and to want to pull those items off the shelf. We want to make sure we win at the shelf because that means we’re creating items that are solving problems for the consumer. That’s very important to us.

As you reflect back on the first seven years of your business, what stands out as the biggest lesson or insight?

Mr. Garza: In 2015, I cold-emailed John Foraker (then the president of Annie’s, Inc.), and was like, “Hey, do you have time to chat?” And I probably didn’t know what I wanted to ask him, but I felt like I should start getting to know people who built platforms or natural food brands.

He gave me 30 minutes of his time graciously, and the thing I remember him telling me is, “We had the benefit of time when we were building Annie’s, so we had those first years to get the mac and cheese going and generate sales. The industry today, you don’t have the benefit of time. It sounds like you have something innovative. You need to run as fast as you can and just keep going.”

That was pretty important for me to hear because in seven years that’s what we’ve done. But we haven’t done it alone. One thing I learned early on is that humility is very important. It’s important enough to us that it’s one of our core values. Humility is important because the faster you can admit to yourself that you don’t know something that you need to know to solve a problem in the business the faster you can find expertise from other people to help solve that problem.

What do the next seven years look like to you?

Mr. Garza: We’re going to continue to build this Mexican-American food brand, and our goal isn’t to be in every category. We’re not trying to build a platform for the sake of building a platform. We’re trying to build a business or brand that solves the problems it’s supposed to solve within the marketplace.

We want to continue to make sure over the next seven years that we stay true to our core values and principles. We’re family first, family second, business third, and doing everything with love. The how of our business, how we build it, is just as important as the why.

So I think over the next seven years what you’ll continue to see is innovation within categories that we currently play in, and then hopefully the consumer asks us to solve problems across other categories.

For the broader macro environment, I do think that these next seven years are going to be very exciting for global flavors, culturally relevant inspired cuisine from BIPOC founders.

We talk about the hyphen a lot at Siete. In “Mexican-American” there’s this beautiful tension in the hyphen that adds instead of subtracts. It adds to the brand experience…

The more authentic brands that are going to become true expressions of the people who are building them, I think that’s going to really resonate to a consumer looking for authenticity. I’m personally very excited about that because I’m a fan of the flavors. I think the products they’re building are great, and representation is important, and I’m hopeful that we’ll continue to see that in the industry.