We use cookies to provide you with a better experience. By continuing to browse the site you are agreeing to our use of cookies in accordance with our Cookie Policy.
Home » Market uncertainty persists a year into COVID-19

KANSAS CITY — Just more than a year after the onslaught of COVID-19 in the United States, the markets most affected (which may be debatable) generally are operating at more “normal” levels but with a great deal of uncertainty about demand as the country and the world emerge from the throes of the pandemic.

The following is a brief recap of the impact of COVID-19 on dairy, egg and meat markets. Each was uniquely affected by the pandemic, with dairy and eggs affected more by demand but meat more by supply.

Parts of the dairy market — butter and cheese — were highly affected by the pandemic and continue to be, although there is hope on the horizon. When the country began “sheltering at home” in late March and early April 2020, dairy was one of the markets hardest hit as demand for fluid milk suddenly vanished with school closings, and for cheese and butter with restaurant and other foodservice closings.

Dairy made national headlines when farmers began dumping milk because there

was no place to sell it. Excess milk typically goes to cheese and dry product manufacturers. But cheese stocks were building because of the loss of foodservice business. CME Group cheddar block and barrel prices dropped about 40% from late February to early April 2020, only to more than double about a month and a half later. CME Group butter prices would follow a similar trajectory, with both products continuing to fluctuate widely as the year progressed.

Cheese and butter prices have steadied in recent weeks, and in March there have been industry reports of foodservice demand improving, though still below normal levels. 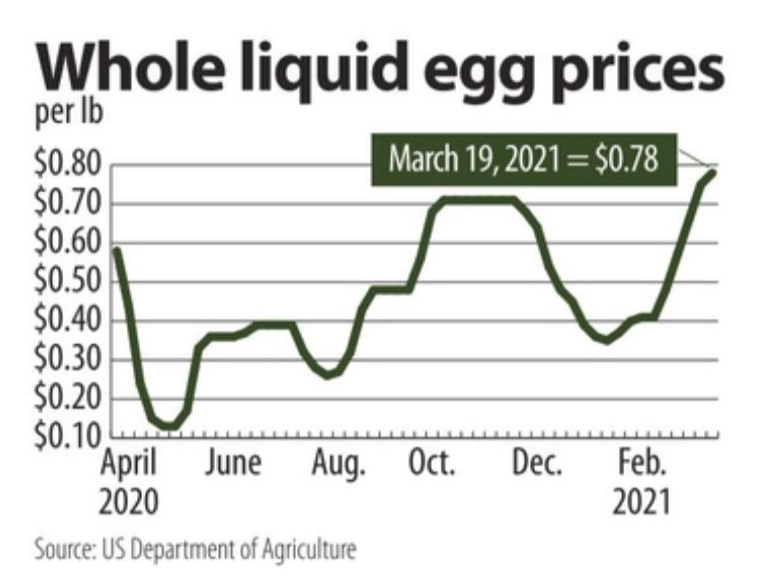 Wholesale prices for Grade A large eggs had fallen 60% from early December 2019 to a range of 60½% to 74½% a dozen in late January 2020 under pressure from oversupply. Prices were recovering in early February only to fall again later that month. Then COVID-19 hit, and there was a run on retail eggs as consumers emptied coolers. Prices tripled from early March to early April, hitting a record $3.06½ a dozen, then subsequently plunging 70% by mid-May. Prices for breaking eggs, for the industrial market, failed to post the strong gains of graded eggs but followed graded prices down and traded at historic lows just over 10 cents a dozen in early May 2020. Liquid and frozen whole egg, which closely follow shell egg prices, also sank to historic lows in May.

Unlike most other agricultural sectors, the egg industry often adjusts fairly quickly to demand signals. While prices were low, producers trimmed flocks and put some into forced molt, quickly reducing the egg supply. At the same time, low egg prices caught the eyes of foreign buyers, and export demand jumped. Those factors continued at play into 2021, and egg prices were the highest since the coronavirus-induced surge last week, while liquid whole egg prices were near three-year highs.

Beef and pork faced a much different, though just as dramatic, scenario. Demand plunged when restaurants closed, and consumers bought more meat to cook at home. But the “straw that broke the camel’s back” came when many beef and pork processing plants, and to a lesser extent poultry processing plants, were forced to temporarily close as COVID-19 cases soared among employees.

At one point, nearly 40% of US beef processing capacity was offline, with pork not far behind. The marketing of millions of cattle and hogs was delayed, and store shelves quickly emptied even with buying limits in place.

Wholesale meat prices, as reflected by the US Department of Agriculture’s beef and pork cutout values, soared to historic highs above $450 per cwt and $115 per cwt, respectively, in early May 2020, more than doubling in four-weeks’ time. Prices then plunged by about 50% in the next few weeks.

Meat prices since have stabilized near or above year-ago levels, though below the pandemic peaks of 2020, with strong exports a supporting factor.

Still to be determined is what has changed permanently because of COVID-19, and how demand for basic commodities may be affected. Home delivery of food similar to that of merchandise? Logistics? More home cooking and baking? Masks? Better sanitation and working conditions? Perhaps even more uncertain is where will demand go as COVID-19 vaccinations proliferate and consumers emerge with pent up needs for everything from Egg McMuffins to a good steak dinner out. Time will tell.