We use cookies to provide you with a better experience. By continuing to browse the site you are agreeing to our use of cookies in accordance with our Cookie Policy.
Home » Slideshow: Innovations from the Plant Based World Expo North America

Slideshow: Innovations from the Plant Based World Expo North America

NEW YORK – Stating that about 5% of the US population considers themselves vegan, Marcel Goldenberg, head of proprietary pricing for Mintec Global, London, told attendees at Plant Based World Expo North America that “if you want to get the other 95%, you have to get the price down.” That’s what many of the more than 3,100 attendees and 200-plus exhibitors and sponsors showcasing plant-based product innovations hope happens sooner than later as the industry moves forward.

Mr. Goldenberg said lower prices may be achieved through economies of scale, the lowering of per unit costs as the category gets larger, as well as better understood. It’s happening, but it takes time.

“The turnout and response to PBW 2021 was better than we expected,” said Chris Nemchek, general manager of Plant Based World. “You could feel the energy and excitement on the expo floor as exhibitors, buyers, manufacturers, investors and distributors networked, made deals and discovered how far the plant-based industry has come since our 2019 show and where we are headed.”

After a two-and-half year hiatus, PBW returned to the Javits Center in New York on Dec. 9 and 10. Innovations from brands were plentiful and several suppliers also exhibited in efforts to assist entrepreneurs with getting their concept to market.

“The organizers were really efficient about connecting the right people with the plant-based industry,” said Henrik Lund, chief executive officer, Naturli` Foods, Denmark. “This is a step in the right direction for improving the economics of plant based.”

Mr. Goldenberg discussed some of the barriers that keep plant-based foods expensive. For starters, advertising is crucial.

“Consumers need to be shown the way,” Mr. Goldenberg said. Consumers know what to do with meat and dairy.

The same is true for research and development professionals. It’s a new space where everyone is still learning so there must be a large investment in R&D. That keeps costs up.

“The logistics are also far removed,” Mr. Goldenberg said. “There’s multiple ingredients going into plant-based foods, which all come with freight rates and other costs.”

Meat and dairy is streamlined and tends to be local. And, Mr. Goldenberg pointed out, meat and dairy have lots of connections in Washington.

There’s also a lot of noise about the “over processing” of many of the first and second generation plant-based products in the marketplace. The industry knows that to grow, this needs to change, as does the overuse of ingredients perceived as unhealthy, such as saturated plant-based oils and sodium. 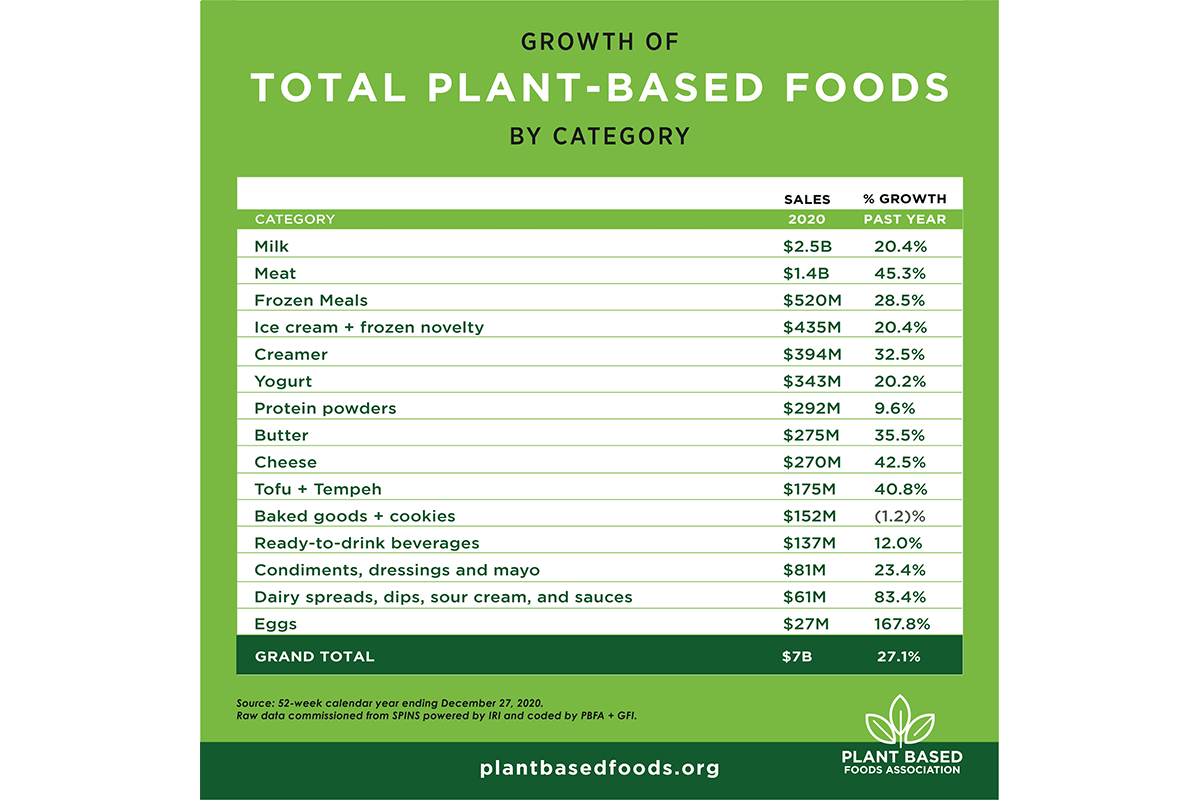 “We know the demand for clean label and sustainably sourced food is only going to increase and we are excited for the opportunity to partner with like-minded brands to create delicious food products that are good for people and the planet,” said Maija Itkonen, co-founder and chief innovation officer, Gold&Green, a Finnish company that used the expo to introduce plant-based food manufacturers to its new protein granules and protein flakes. “We believe our new high-protein dry ingredients are a game-changer in how we feed the growing population. Not only are the Protein Flakes and Granules sustainable and scalable, but they’re made of real, high-quality food.”

Made from three ingredients — oat bran, pea and fava bean protein — the shelf-stable proteins are easily added to dry snacks. They also may be hydrated and blended with other ingredients to form products such as burgers, patties and balls.

“We’ve been able to merge our innovative technology with clean, naturally nutritious ingredients to create an entirely new protein source that can instantly elevate the nutritional profile of any food or drink application,” Ms. Itkonen said. “That’s a key point of difference when you look at the questionable ingredient labels on many of today’s most popular foods.”

For Cleveland-based Wonderlab, manufacturers of Doozy Pots vegan frozen dessert, ingredient sourcing is part of the brand’s clean label messaging. The company seeks growers who use organic and regenerative methods that focus on the soil and ecological health, and all of the brand’s cartons are made from a minimum of 35% post-consumer recycled fibers.

“It’s important that our core ingredients are grown using practices that consider the health of the planet and the well-being of the people who grow them,” said Karl Sutaria, co-founder.

Food scientist Kirsten Sutaria, co-founder of Doozy Pots, said, “Using our versatile hemp and oat blend allows us to make a frozen dessert that is just sweet enough and reminiscent of old-world Italian gelato without the saturated fat from dairy or coconut.”

During the keynote, Rachel Dreskin, CEO of the Plant Based Foods Association, San Francisco, said plant-based milk currently has 16% share of the milk space at traditional retail and 50% in the natural foods segment. Improved product quality is driving growth. Consumers, especially young consumers, like plant-based milks (with oat the leader) for what they are, not necessarily as an alternative to milk. It’s an evolution in mindset with Gen Z. Whereas millennials and older consumers see plant-based milk as an alternative, younger consumers just see it as another option. This will only become stronger with sensory and nutrition improvements.

Those improvements are happening as innovators think out of the box. Who says mozzarella — dairy or plant based — should be shredded on top of pizza? Miyoko’s Creamery, Petaluma, Calif., threw away the rule book to formulate vegan pizza mozzarella by focusing on the desired end result: delicious meltiness. Rather than creating a solid block of vegan cheese and shred it, Miyoko stripped out the solids and ingredients that hinder meltability, such as anti-caking agents used to prevent clumping, and focused on the melt.

The clean label perishable product features organic cashews and organic sunflower oil as the top-two ingredients. The formulation includes a touch of mushroom extract for umami and vegan cultures for mozzarella flavor development.

Retailers are looking for plant-based products to fill gaps in their stores, said keynote speaker Marcellus Harris, assistant commodity manager for poultry at Kroger. The Cincinnati-based retailer is committed to the plant-based movement and currently has more than 100 plant-based items in its private label Simple Truth brand, 30 of which were added this past year.

“Plant-based focus extends across all our customers,” he said, adding it’s driven by flexitarian families, with improved health a priority. “But, the consumer is flipping the package over (and reading the ingredients and nutritionals).”

Susie Weintraub, CEO of Envision Group/Compass Group, Charlotte, NC, the largest global on-site foodservice company, said, “You have to make plant-based the easy choice. It has to taste great and be affordable.”

It all comes back to price and taste. That’s when the other 95% will get on board.