We use cookies to provide you with a better experience. By continuing to browse the site you are agreeing to our use of cookies in accordance with our Cookie Policy.
Home » Frontera founders heat up product development at Conagra Brands

NEW YORK — JeanMarie Brownson and Rick Bayless recently returned from a weeklong trip to Mexico, where they discovered ingredients and flavors to use in new packaged sauces, meals and snacks. Ms. Brownson is the culinary director of Conagra Brands, a role she stepped into two years ago when the company acquired Frontera Foods. She and Mr. Bayless, famed chef and restauranteur, co-founded the business with partners Manny Valdes and Greg Keller in 1996.

“There’s so much more you can do with authentic Mexican food than what we’re doing,” Ms. Brownson told Food Business News at the Summer Fancy Food Show, held June 30-July 2 in New York. “I think we were ahead of the curve 20 years ago, and we’re still there, ahead of the curve today.”

The brand’s recently launched Frontera Especial Tequila Borracha Salsa, featuring black garlic and chipotle, received a 2018 Specialty Food Association’s sofi Award in the salsa and dip category. The product serves as a testament to the company's commitment to authenticity.

“We like to think of our products as never watered down, that we’re going for the true and authentic flavor,” Mr. Bayless said, pointing to a frozen chicken and chorizo taco bowl that was sampled at the 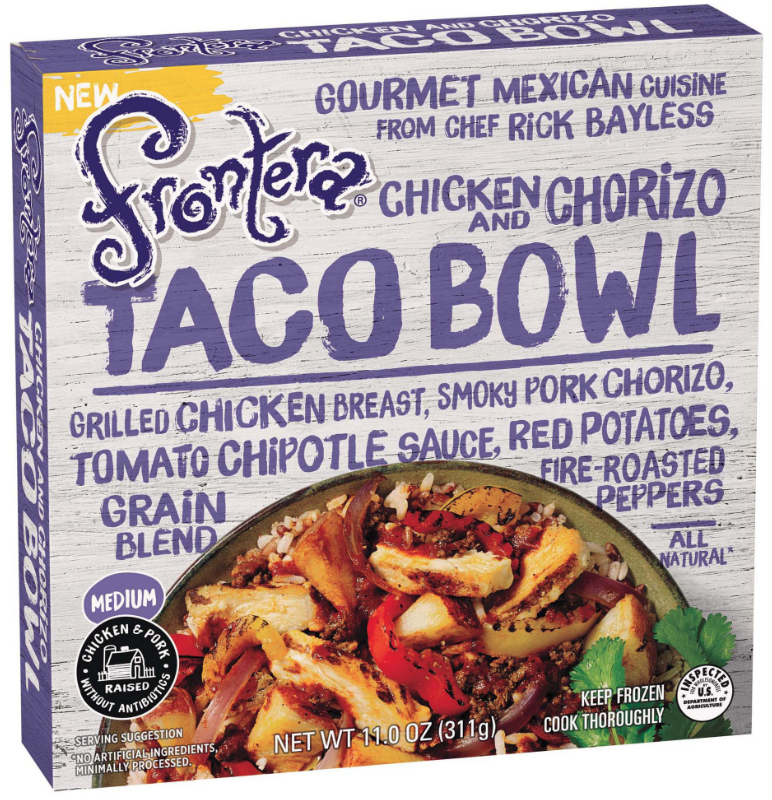 brand's booth. “Even that bowl over there. It’s kind of hilarious that in this booth, there’s somebody standing there that’s microwaving that bowl one at a time just like the package directions say, and you taste it and go, ‘This came out of a microwave?’”

Mr. Bayless has lived and traveled throughout Mexico for more than four decades and has authored eight cookbooks on traditional Mexican cuisine. In 1987, he opened his first restaurant, Frontera Grill.

Prior to joining Mr. Bayless on the Frontera frontier, Ms. Brownson was test kitchen director and assistant food editor for the Chicago Tribune, cooking alongside top chefs and cookbook authors across the country. At Conagra Brands, she leads culinary development across the company's growth business programs.

“Since they acquired Frontera, our culinary team has doubled in size because they said to me, ‘Change the culinary culture here,’” she said. “So, I went out and hired some of our young chefs from the restaurant world who want to eat clean, and that has been fantastic... It’s a food company that has become a real food company in the last two years. And I think that’s happening all over because they’re realizing a lot of these small brands here at the show are changing how Americans shop and want to eat, and Conagra is paying attention.”

During an interview, Ms. Brownson and Mr. Bayless discussed their approach to product innovation and how business has changed since Conagra Brands bought Frontera Foods.

Food Business News: You’re all about pushing boundaries. How do you decide which authentic Mexican flavors and ingredients to introduce to the American consumer?

Rick Bayless: What people are buying in a grocery store is quite different from what they’ll go for when they’re having something handcrafted individually by a restaurant chef for them, sold to them individually by a server that can really tell you the background of the dish and so forth.

We get undivided attention from our guests for a long stretch of time in the restaurant. When you’re in a grocery store, first of all, there’s at least 10,000 things screaming at you at the same time, and you get no more than just a couple of seconds with something.

So, we take the idea of what resonates with people. We don’t Americanize our food. That’s not something I would ever describe as what we do. What we try to figure out is what in the traditional Mexican kitchen is going to resonate today with our potential customers, and then we build around that... When you taste it, the flavor you get is that time-honored flavor.

We’re in the game of giving people something that has what we call the time-honored flavor because we think that’s what sticks around for a long time. We’ve been at this a very long time. Our restaurants, we’re moving into our 32nd year with our first restaurant, and it did better last year than it did any other year. So, we really focus on keeping great consistency and evolving with the times.

JeanMarie Brownson: And the clean label trend that’s so popular now, we’ve been doing it since day one. Because if you put things in a jar, you don’t have to add anything to it. And so then it became a natural thing for us to go to the freezer because of the same thing. The freezer is the preservative.

Mr. Bayless: We’ve been clean label way before it was popular to be clean label. Just because that’s the way we cook in our restaurants, and we want that for ourselves and we’re going to share that with our customers.

Tell me about your sofi Award winning salsa.

Ms. Brownson: Before Conagra, we had won a bunch of sofis for innovation and best salsa and things like that. So, we didn’t set out to win it. We just made salsas we want to eat. The tequila borracha is something we love, we’ve been serving it in restaurants for years and years and years and thought the American consumer is ready for it now. Five years ago, not so much.

What's next for the Frontera brand?

Ms. Brownson: We’re ready to launch a single-serve frozen breakfast. You’ll see those within the year.

Mr. Bayless: In the clean label world, that’s hard. If you look at what’s out there in single-serve frozen breakfast, not a lot of clean labels. That was one of the biggest stumbling points, but we’ve got that all worked out now, and we’re happy with it, and I think it’s going to be really great.

Ms. Brownson: We wanted egg in there, and so to do a frozen egg is tricky, but when you put the frozen egg with salsa, it really works. So, we have huevos rancheros, chilaquiles, and a couple of other things coming out. I think people will be able to take their breakfast on the go or enjoy it at home.

Mr. Bayless: There’s this rebirth in frozen that I’m really happy about because I’ve been a closet freezer lover for a long time. When we opened our restaurants, every good restaurant that opened said, “We don’t even have a freezer in our kitchen!” That was the mantra. But I’ve always had a freezer in a restaurant because I think the freezer is the best way to preserve some things. When you get something in season and you want to preserve it, to extend the season and do it the right way, the freezer is a really good piece of equipment to have. 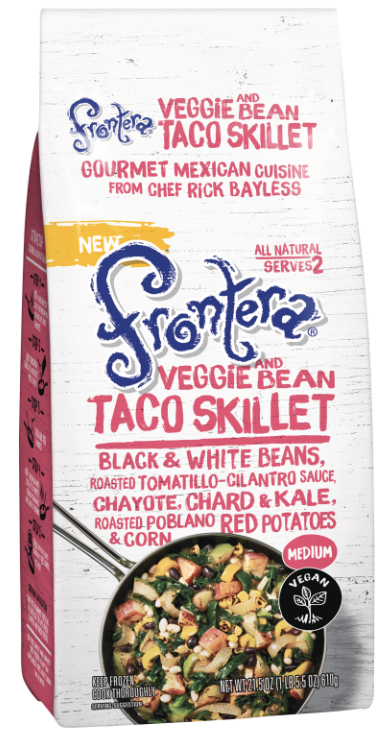 For me, the fact that people are putting more attention now into the freezer section offerings, because it used to be the last resort kind of food, but now, when you taste these frozen skillet meals that we’ve done… This is not the food of last resort. This is food that you can eat that tastes very much like what you can get in our restaurant.

What have been some of the benefits of joining Conagra?

Mr. Bayless: We had been playing around with doing frozen stuff for 10 years, and we could never bring it to market because we didn’t have all the right resources to do it. And joining with Conagra meant that we have resources. It was remarkable what we could get and how fast we could get that project done. For us, 10 years, still not done. For them, it was like six to eight months, and we were already ready to go.

Ms. Brownson: I think our products are definitely better than they’ve ever been. It’s a very good story and one we’re really happy about because that’s not what people expect when a big company buys a small company.

Mr. Bayless: We were at a point where we had to do something because we didn’t have the wherewithal to grow our business to the next level. We were kind of stuck, so we needed a big influx of money to grow into the next stage, and obviously we could get that in several different ways. But the one that seemed to be the best fit was the Conagra relationship because they were very much aware of the fact that our brand represents where prepared foods is going. They weren’t buying it to make it into Orville Redenbacher’s popcorn.

That tequila borracha sauce, when you taste that, there is no messing around with the flavor. It is right there. And it’s not dumbed down for anybody, and to have the confidence to go into the market with that... That’s the flavor people are looking for, and that segment of the market that wants that bold flavor is the growing segment. And people are so much more used to stuff that tastes fresh and authentic.