We use cookies to provide you with a better experience. By continuing to browse the site you are agreeing to our use of cookies in accordance with our Cookie Policy.
Skip To Content
Home » Third Point looks to replace Campbell Soup Co.’s board

NEW YORK — Citing a “persistent failure to discharge its fiduciary duties,” New York-based asset manager Third Point has issued a call to replace the entire board of directors of Campbell Soup Co. The announcement comes a month after Third Point increased its share of the outstanding capital stock of the Camden, N.J.-based company to 5.65%.

In a letter to Les Vinney, chairman of Campbell Soup’s board, Daniel S. Loeb, a hedge fund manager with Third Point, said his company intends to nominate a “shareholder slate” at the company’s upcoming annual meeting set for Sept. 16. Included in the list of Third Point’s 12 nominees for the shareholder slate is William D. Toler, former president and chief executive officer of Hostess Brands, Inc.

“Today, the shares of Campbell trade at a price that is 20% lower than it was 20 years ago,” Mr. Loeb wrote in his letter. “The stock performance is a report card on this board’s tenure of mismanagement, waste, ill-conceived strategy and inept execution. On the company’s earnings call last month, interim c.e.o. Keith McLoughlin detailed the board’s years of failings with an extensive catalogue of the strategic and financial blunders that brought the business to the brink. Absent from his commentary, however, was any accountability for the damage. No changes to the company’s board or senior leadership were announced, making his contrite tone ring hollow.”

On Aug. 30, Campbell Soup released details of a new strategic plan, one that would have the company divest its Campbell International and Campbell Fresh business units. Proceeds from the divestitures will be used to reduce debt. The announcement followed a strategic portfolio review the company initiated earlier this year. Poor financial performance and pressure from some investors, including Third Point, prompted the review.

But Mr. Loeb in his letter called the outcome of the strategic review “disappointing,” noting that it was a reflection of the current board’s inability or unwillingness to take bold action to correct problems at Campbell Soup. 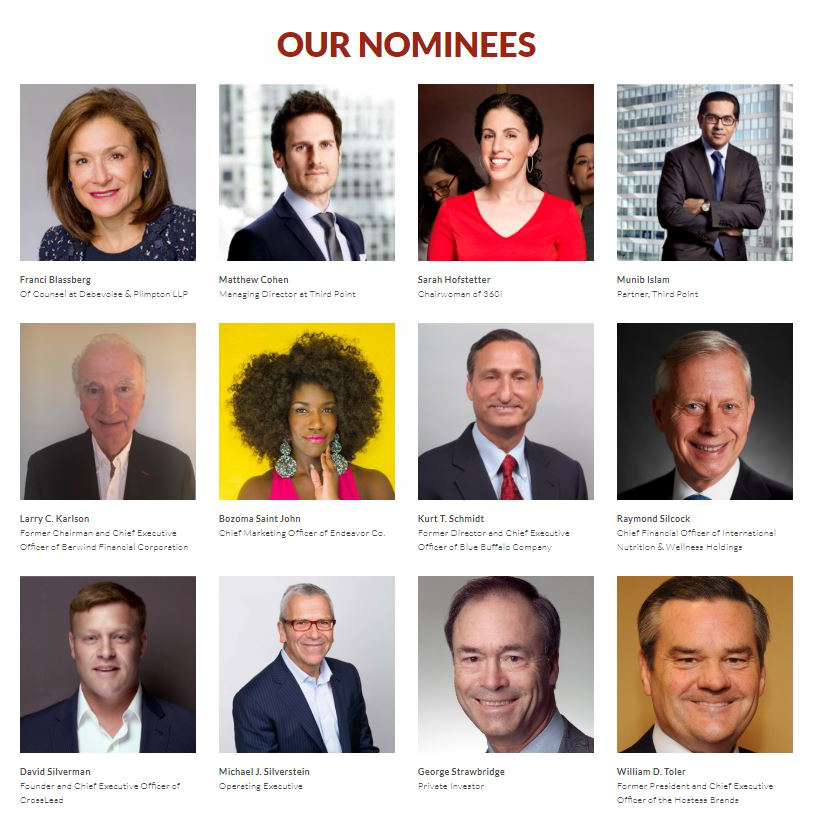 “Since 2016 alone, this board has overseen over $7 billion of value destruction,” Mr. Loeb said. “Years of poorly conceived and executed acquisitions have over-levered the balance sheet, providing a limited range of options to remedy the problems Campbell confronts today. The board’s shocking failure to have a c.e.o. succession plan in place following Denise Morrison’s sudden exit is a scathing indictment of its inability to conduct one of any board of directors’ most essential duties — to secure capable, continuous leadership for the company.”

In contrast to the current board’s makeup, Mr. Loeb said Third Point’s proposed slate of directors “brings sophisticated expertise to oversee Campbell at this critical moment.” He said the nominees have extensive experience in operations, marketing, strategy, transactions, leadership, capital allocation and general corporate governance. The list of nominees is available at www.refreshcampbells.com/our-nominees/

Commenting on Third Point’s letter, Mr. McLoughlin said: “On August 30, Campbell announced the results of a comprehensive board-led strategy and portfolio review to stabilize the company, improve performance and drive shareholder value. As part of the review process, the board, together with outside advisers, considered a full slate of strategic options and determined that the best path forward to maximize shareholder value, at this time, is to optimize the company’s portfolio, divest certain businesses and pay down debt, and further reduce costs.

“The company is currently focused on implementing that plan and setting the foundation for sustainable, profitable growth in fiscal 2020 and beyond. The board remains open and committed to evaluating all strategic options to enhance value in the future.”