Redefining health and wellness for 2019 and beyond

CHICAGO — For a growing number of consumers, it’s not enough for food to simply satiate the appetite and satisfy the senses. They want breakfast, lunch, dinner and snacks to contribute to longevity and well-being. Food trend forecasts show natural energy, probiotics and plant-based foods will be the three sectors fueling the health and wellness trend in 2019.

“Instead of thinking in terms of nutritional requirements or a diet, which people view as rigid, today’s consumer prefers to think in terms of lifestyle choices,” said Shayna Snyder, account director, Culinary Visions, Chicago. “Health-conscious consumers are seeking out products that help meet their wellness goals.”

Ms. Demeritt cited the example of the recent name change and rebranding of Weight Watchers to “WW International” with the tagline “Wellness that Works.”

“The diet is no longer a tacit remedy for mainstream-consumer concerns for health issues,” she said. “While Weight Watchers has profoundly shaped the culture of dieting in the U.S. for half a century, contemporary health and wellness notions have moved beyond weight loss and management.”

“Contemporary diets are personalized and all about balance, wellness and energy." — Laurie Demeritt, The Hartman Group

It is common for today’s consumers to practice some kind of dieting ideology, anything from gluten free to paleo. They are embracing personal responsibility and recognize the choices they make in terms of food and beverage impact the balance in their body. They prioritize “feeling good” over “looking good.”

“American eating habits are much more nutritionally intentional than in a former era composed largely of short-term crash diets, silver-bullet products and eating to look good,” Ms. Demeritt said. “Contemporary diets are personalized and all about balance, wellness and energy. Wellness and energy are shorthand for feeling lighter, better digestion, reducing inflammation and ultimately feeling good and being happy.”

“Consumers continue to avoid markers of processed foods and their key ‘red flag’ ingredients, namely sugars, sodium and bad fats,” Ms. Demeritt said. “While sodium is still heavily avoided due to its connection to heart health, consumers also see it as an indicator of ‘more processed’ foods.”

Consumers are interested in receiving specific health benefits from foods or nutrients, according to the 13th Annual Food and Health Survey from the International Food Information Council Foundation, Washington. The top-three desired health benefits in 2018 are cardiovascular health (20%), weight loss or weight management (18%) and energy (13%). And whereas energy has been a desired perk since the commencement of the survey, the market shows that energizing foods and beverages have evolved, with the current trend leaning towards products formulated to provide sustained energy, rather than the instant Red Bull boost. Many products are formulated to complement consumers’ varied dieting ideologies.

Dang Foods, Berkeley, Calif., for example, is introducing the Dang Bar, a line of plant-based bars made from minimal, nutrient-dense ingredients, including almond butter, cocoa butter, coconut, pea protein, sunflower seeds and chia seeds. The ingredient combination is designed to provide sustained energy without a sugar crash. Each bar has up to 10 grams of protein, 15 grams of fat, 4 to 5 grams of net carbohydrates and no added sugar. 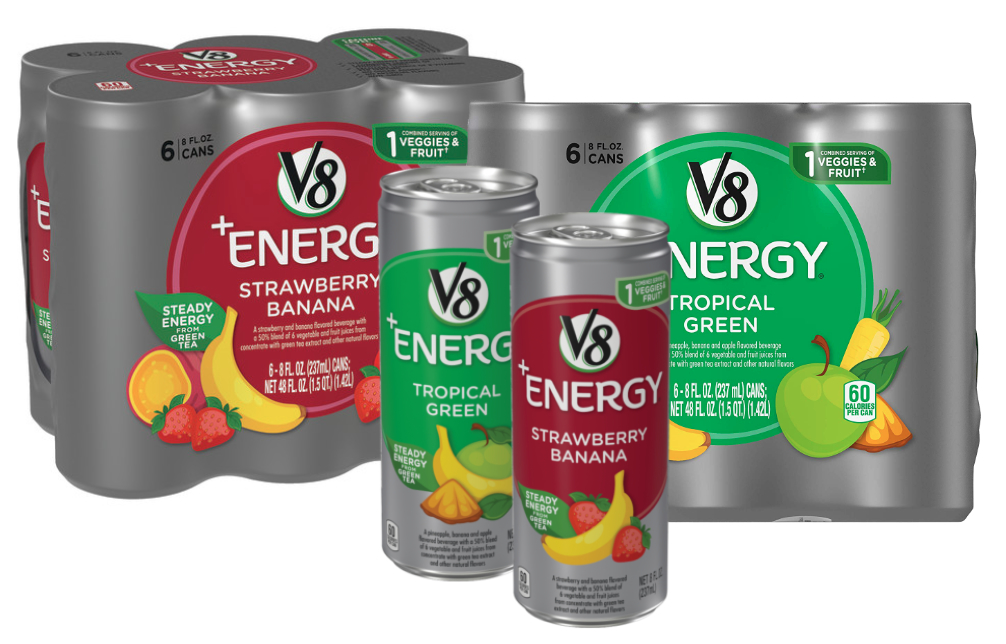 The new V8 +Energy from Campbell Soup Co., Camden, N.J., starts with a base of fruit and vegetable juices — an 8-oz can has one combined serving of fruits and vegetables — and is powered by green tea, which provides 80 mg of caffeine. In addition, the beverage is fortified with B vitamins. V8 +Energy’s formulation promises to not make a consumer wired, but rather wakeful. It comes in still and sparkling versions, in regular and diet formulations.

Wired vs. wakeful sustainable energy is V8 +Energy’s proposition. To better understand the two requires differentiating between metabolic energy and mental alertness. The simple sugars in the fruits and vegetables are about the former, while caffeine is the latter.

Metabolic energy refers to the Krebs cycle, a complex pathway that converts ingested carbohydrates, fats and proteins into a slow, steady stream of energy — adenosine triphosphate (A.T.P.) — during the process of aerobic respiration. The energy fuels the body’s cells to keep it working, with the unit of energy measured in calories.

Many B vitamins are known to participate in this energy-producing process, though they themselves are not metabolized. They contain no calories and therefore are not energy. Still, because they are critical components in the Krebs cycle, they are often included in energy beverages.

Caffeine is also calorie free and therefore not metabolized. It functions by attaching to receptors on brain cells, stimulating the brain and thereby increasing mental alertness. Consumers perceive this as being a boost in energy, but in fact, has nothing to do with providing caloric fuel to the body’s working cells.

Caffeine is found in the leaves and fruits of an array of plants. It may be added to foods and beverages in the form of a plant-based ingredient or as an isolated white powder. Whatever the format, caffeine easily passes from the bloodstream into brain tissue.

It starts in the gut

The proliferation of gut-healthy foods is expected to explode in 2019. It is already a booming category with probiotics and the prebiotic fibers that fuel their growth being added to all types of foods and beverages. These products range from the familiar, such as yogurt, kefir and kombucha, to the unexpected, everything from bread to breakfast cereal.

Numerous studies show that a healthy gut is the foundation of overall wellness, as a balanced, positive human microbiome is associated with vitality and healthy aging. Roughly a quarter of U.S. adults sought foods and beverages with high amounts of probiotics or prebiotics in 2017, according to a national consumer survey conducted by Packaged Facts, Rockville, Md. Manufacturers are responding.

From April 2016 to April 2017, nearly 2% of new food and beverage products globally contained probiotics, rising to 3% in the U.S. market, according to Innova Market Insights, The Netherlands. The number of probiotic product introductions globally grew from less than 100 in 2002 to nearly 1,800 in 2016, with U.S. by far the leading market, followed by the U.K. and Canada. 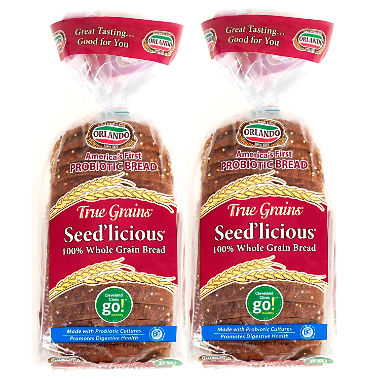 “Probiotics have emerged as a driving trend in the industry,” said David Sprinkle, research director at Packaged Facts. “And given the core importance of gut health, this suggests continued potential for growth of probiotic- and prebiotic-containing foods, as consumers continue to learn more about them and next-generation products make their case in the market.”

Among probiotic and prebiotics proponents, millennials show the most interest in probiotic foods and beverages, compared to Gen Xers and baby boomers. This is in line with the overall elevated interest in functional foods among millennials.

Acceptance by the young, yet influential consumer segment is the basis for Packaged Facts’ forecast of continued positive momentum for probiotic and prebiotic products. Another reason is the advancements made by scientists in recent years. With a better understanding of how the microorganisms survive, thrive and exert health benefits on the host, it is now possible to expand their application and sell their benefits.

“For long, the industry had not figured out how to best market probiotic foods and beverages beyond yogurt and similar traditional sources,” Mr. Sprinkle said. “But that is changing, and the baked goods industry is a good example.”

One such product comes from Cleveland-based Orlando Baking Co., which pioneered probiotic bread in the U.S. when the company introduced True Grains Seed’licious in 2011 after two years of product development. Since, the company partnered with the Cleveland Clinic in association with the clinic’s “Go! Well for Healthy Eating” initiative, to reformulate the bread and offer additional whole grain benefits. The value-added 100% whole wheat bread is made with probiotic cultures to promote digestive health, and features flax seed, sunflower seeds, chia seeds and millet for a good source of omega-3 fatty acids.

“As we see it, the True Grains probiotic line positions sliced bread back on top as the greatest thing ever,” said Nick Orlando, vice-president of sales. “Our probiotic breads will appeal to consumers who may suffer from digestive health issues and are interested in the benefits of maintaining a healthy belly.”

FlapJacked, Westminster, Colo., markets probiotic-packed FlapJacked Mighty Muffins mug cake mixes. Made with 20 grams of protein and 10 grams or less of sugar, the consumer adds water, stirs and microwaves for 35 seconds for a meal or snack on the go.

Los Angeles-based thinkThin now offers instant oatmeal cups designed for digestive health. The thinkThin Protein and Probiotics Hot Oatmeal is formulated with probiotics to support overall wellness, 6 grams of fiber to help support digestion, plus the benefit of 10 grams of protein to help provide satiety and energy to start the day, according to the company. 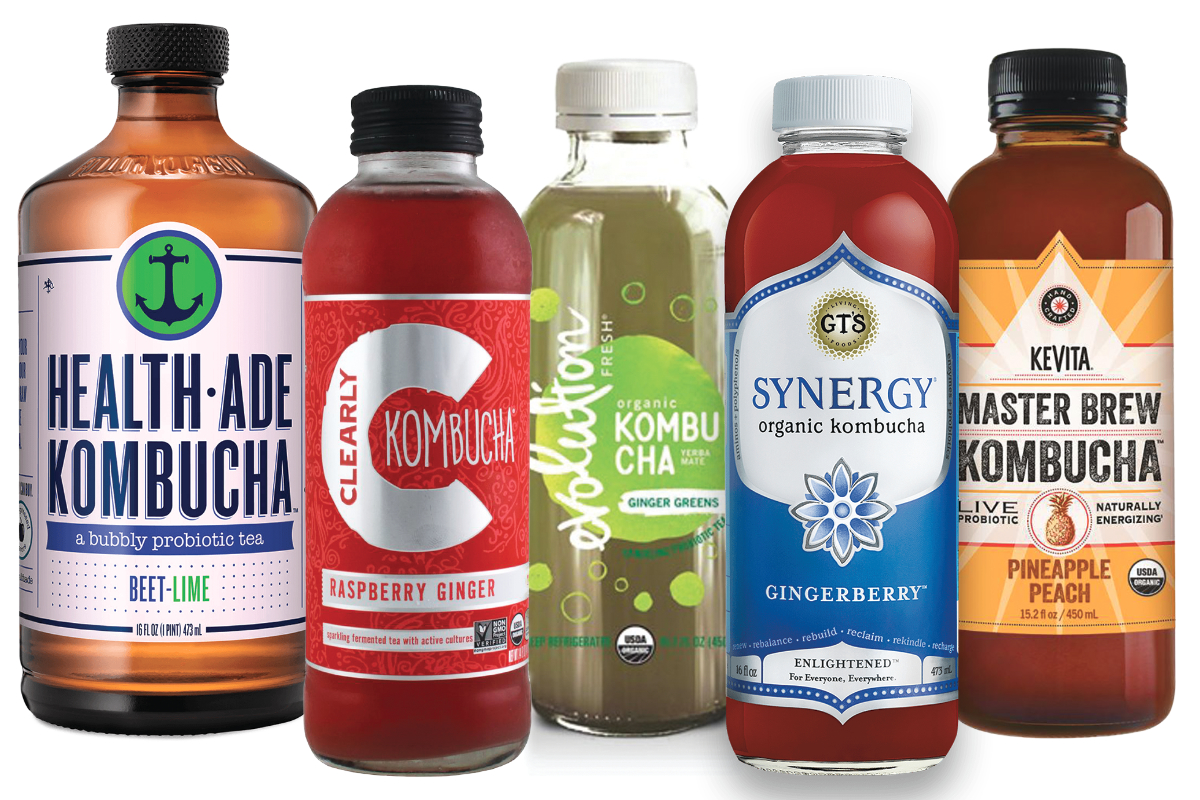 Kombucha, a fermented tea made with microorganisms that produce an effervescent beverage with probiotic function, has become mainstream, with new players entering the category on a regular basis. Uncle Matt’s Organic, Clermont, Fla., is a one of the newer concepts.

“Tea is the most popular beverage in the world, and I believe combining the antioxidant benefits (and natural energy) of green tea with the naturally occurring probiotics and organic acids produced from the real brewed fermentation creates a tasty but nutrient-packed beverage,” said Matt McLean, founder.

Cultured Love L.L.C., Zeeland, Mich., markets a line of specialty probiotic krauts that are naturally fermented, meaning there are no added cultures, only raw vegetables and spices. Though the krauts can be eaten alone — the company suggests having a tablespoon before each meal to benefit digestion — cooking with them can be a culinary adventure.

“Sauerkraut on its own is full of probiotics from the fermentation process, and our flavor varieties also contain many additional benefits,” said Jodie Krumpe, founder.

Dillyicious, which tastes like a dill pickle, contains the anti-inflammatory turmeric. The Root for Ginger, as the name suggests, includes a dose of ginger, which aids in digestion and has anti-nausea properties.

There is no denying plant-based foods have made strides in appearance, flavor and nutritional properties. As a result, they are expected to dominate the health and wellness conversation this coming year.

This speculation is supported by the new plant-based menu being rolled out by Sodexo, Gaithersburg, Md., to hundreds of accounts across its universities, healthcare and corporate services segments. Sodexo’s culinary team developed around 200 plant-based recipes that appeal to not only flexitarians, vegetarians and vegans, but also general consumers. In one of many examples, the chefs created a Mexican-themed menu featuring dishes such as jackfruit and avocado tortas, chipotle quinoa burrito bowls, and garlic-roasted cauliflower burritos.

“We are entering a completely new phase of innovation in foods and beverages,” says Julie Mann, global plant protein program manager, Ingredion Inc., Westchester, Ill. “This is truly a paradigm shift. Plant based is becoming a pillar of food infrastructure.”