JACKSONVILLE, FLA. — Retail outlets could benefit by focusing on shelf management more and dialing back on promotions, according to the report “Shelf Management: The Value of Getting the Shelf Right” released Dec. 4 by Jacksonville-based Acosta, a sales and marketing agency in the consumer packaged goods industry.

The report also explained how retail outlets are over-emphasizing private brands, giving more shelf space to categories in the perimeter of the store and altering their in-store offerings because of increasing e-commerce sales. The Acosta report may be found here.

From a total store perspective, 66% of units sold are not promoted while shelf management can provide a 6% sales lift, according to the report.

“A promotion may bring a short-term gain, but the impact can be difficult to quantify, return on investment is variable and brand equity may potentially erode,” the report said. “As competition heats up in the grocery industry and more shoppers are channel surfing, trade spending may be unsustainable as revenue declines.”

The report said 55% of shoppers decide which brand to buy in store. Food categories where purchase decisions are more likely to occur in store are spices/seasonings, cookies, meat marinades/rubs, chocolate candy and canned tuna. Among the shoppers making purchase decisions in the store, 22% look for the best price/value, 20% are familiar with a set of brands and make a purchase based on what appeals to them at the shelf, and 13% decide based on what flavor/type or package they need.

In store, a wide assortment of private brands can lead to top-selling items being out of stock on the shelf. Private brands, being 11% over-spaced on average, tend to receive more shelf space than they deserve, according to the report. 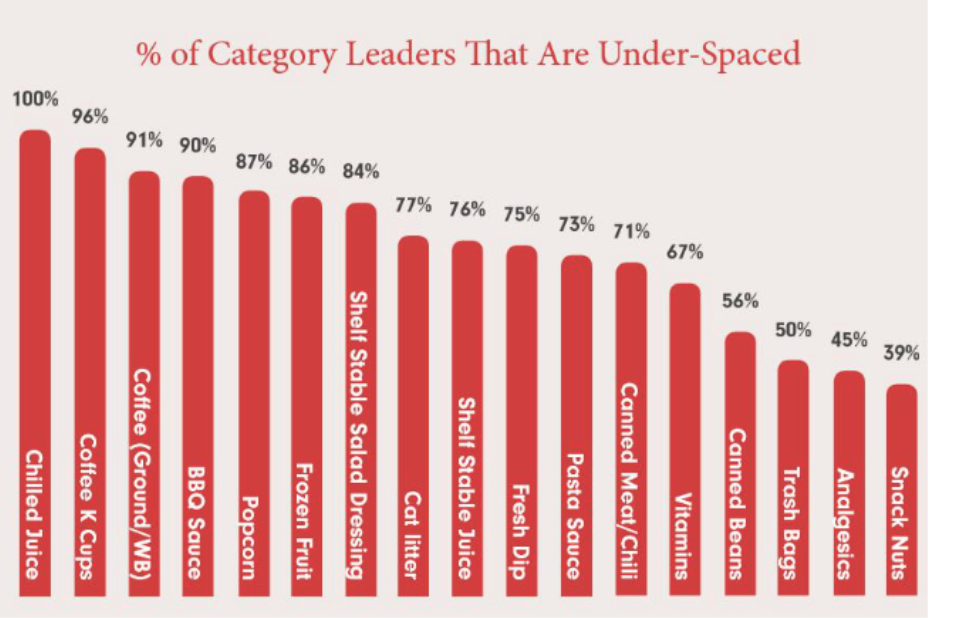 Such is not the case for other items.  Annual household spend on produce, generally found on the perimeter of stores, has increased 12% since 2014 while center-store spend has declined 0.5%. Many retailers in response are decreasing the size of center store to give more space to the perimeter.

“Space that was once taken up by frozen foods, canned vegetables and general merchandise has now been reduced to make room for delis, prepared foods, organic foods and fresh produce,” the report said.

E-commerce sales have picked up as well. Twenty-eight per cent of shoppers said they shop online-only grocery retailers “at least occasionally.” The rise of e-commerce has led retailers to alter their strategies, which includes offering less assortment in the store and expanding the assortment of offering online.

“So far, the response from shoppers has been mixed,” the report said. “Millennials are the biggest fans of the model with many indicating an existing preference for online shopping while older generations are more hesitant for a variety of reasons.”