We use cookies to provide you with a better experience. By continuing to browse the site you are agreeing to our use of cookies in accordance with our Cookie Policy.
Skip To Content
Home » Cereal makers aim to capture consumers' taste buds

KANSAS CITY — The past year has been filled with recalls and recipe reinvigoration within the ready-to-eat cereal category. But troubles in the first half of 2018 have given way to more positive trends heading into the last few months of the year.

Ready-to-eat cereal manufacturers will need these trends sustained in new sales if they hope to reverse the downward slide that has riddled category sales over the past year.

Dollar sales during the period trended lower at three of the four major R.-T.-E. cereal manufacturers, with the lone exception being Post Holdings, Inc., where sales increased 2.1% during the period. Even private label found the category challenging, with dollar and unit sales down 6.6% and 4.7%, respectively, according to I.R.I. 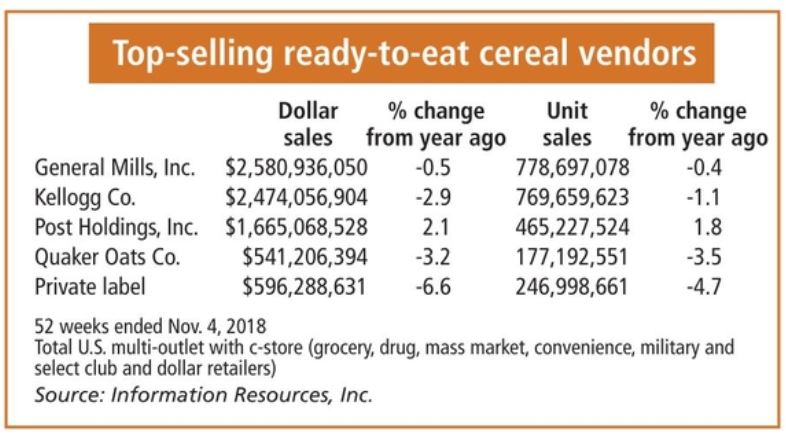 The Kellogg Co., Battle Creek, Mich., experienced a 2.9% decline in dollar sales during the 52 weeks ended Nov. 4, according to I.R.I. Kellogg was rocked in the summer by a major recall of Honey Smacks cereal that forced the company to pull all of the product from the shelf, but the company’s top executive pointed to examples of the company’s cereal business stabilizing in the third quarter even with the recall. Both Frosted Flakes and Froot Loops grew consumption and share in the taste/fun cereal segment, said Steven A. Cahillane, president and chief executive officer, in an Oct. 31 earnings call.

“But more important for the category will be stabilizing the wellness-oriented adult segment,” he said. “Stabilizing adult brands Raisin Bran and Mini-Wheats was a priority for us this year, and our efforts to amplify the wellness attributes of these brands are clearly resonating with consumers. Both brands posted growth in consumption and share this quarter.”

Kellogg recalled Honey Smacks cereal on June 14 because the Centers for Disease Control and Prevention, Atlanta, said the cereal could be contaminated with Salmonella Mbandaka and make people sick. The C.D.C. on Sept. 26 concluded its investigation into the outbreak, saying 135 people were inflicted between March 3 and Aug. 29. Kellogg reintroduced Honey Smacks cereal in November, but the recall impacted cereal consumption and share in the third quarter. 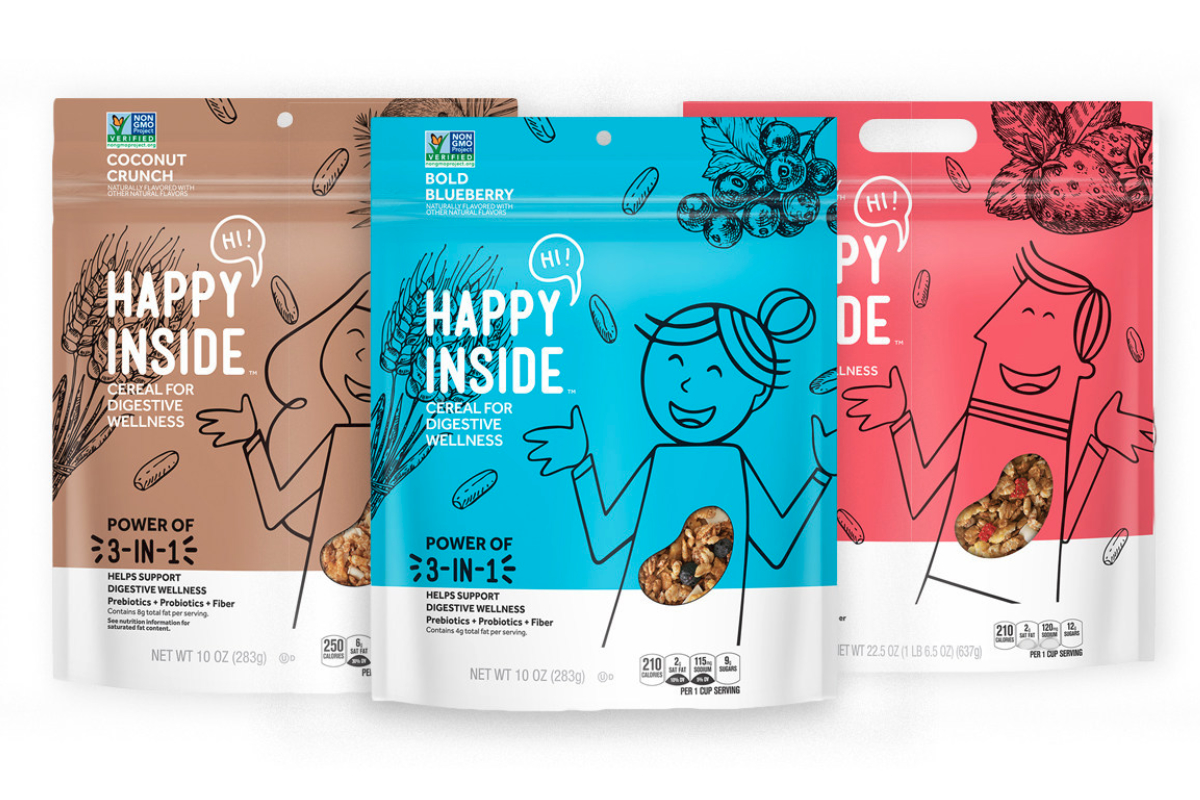 With the Honey Smacks recall behind, Kellogg is free to focus on a new cereal brand. In mid-November, Kellogg introduced Hi! Happy Inside, a new wellness brand geared toward consumers in search of digestive wellness.

The brand initially will include three cereal varieties that are marketed as a “3-in-1 cereal,” featuring prebiotics, probiotics and fiber. Kellogg said Hi! Happy Inside delivers 1 billion C.F.U. (colony forming units) live probiotics from active strains, contains 2.5 grams of prebiotics and has 8 to 9 grams of fiber.

The cereals are available in coconut crunch, blueberry and strawberry.

“This new cereal provides a proactive real food solution to people who want to incorporate more prebiotics and probiotics into their diet,” said Aleta Chase, marketing director for Hi! Happy Inside.

News also has surfaced that Kellogg plans to introduce its first new Rice Krispies cereal in a decade: Strawberry Krispies. Although Kellogg produced a version of Strawberry Krispies in the 1980s, the new version set to hit store shelves in January will feature a new recipe, according to the company.

Despite I.R.I. data showing a 0.5% decline in dollar sales in the 52 weeks ended Nov. 4, Minneapolis-based General Mills, Inc. considers its cereal business to be on a bit of a hot streak, boosted by strong performance from its taste brands. 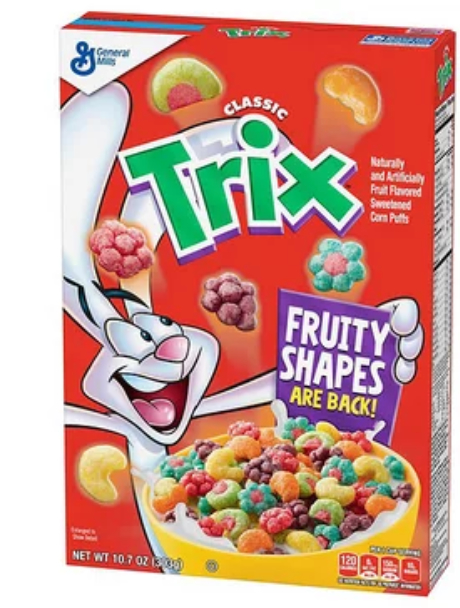 In October, General Mills said it would bring back Classic Trix Fruity Shapes after receiving more than 20,000 requests for the product over the past 18 months. The product debuted in 1991 and disappeared in 2006, when the cereal returned to its original round shape. Classic Trix Fruity Shapes feature raspberry red, lemon, orange, wild berry blue, grape purple and watermelon pieces.

Speaking of taste, Post Holdings Inc., St. Louis, is planning to give consumers’ taste buds the ultimate test with the launch of Sour Patch Kids cereal. The cereal, which is set to debut Dec. 26 exclusively at Walmart, features pieces with a sour coating but a sweet, sugary finish. Sour Patch Kids are a soft gummy candy with a coating of sour sugar, so the taste of the candy changes from sour to sweet.

The introduction of Sour Patch Kids cereal will continue a trend in which Post Holdings has partnered with Mondelez International to shake up the cereal aisle. Over the past two years the companies have joined forces to introduce a variety of cereals based off Mondelez products, including Honey Maid S’mores, Nutter Butter, Chips Ahoy! and Oreo O’s.