We use cookies to provide you with a better experience. By continuing to browse the site you are agreeing to our use of cookies in accordance with our Cookie Policy.
Home » Artificial intelligence and food – The future is now

Artificial intelligence and food – The future is now

CHICAGO — A new report published by the Refresh Working Group, which is funded by Google and led by the Swell Creative Group, San Francisco, aims to better understand the role artificial intelligence may play in food production, distribution, processing and consumption. Titled “Food + tech: Soil to supper,” the report is a first step in contextualizing how such a rapidly evolving technology may add value to the supply chain.

“This report initiates a much-needed conversation about the benefits technology can bring to food production, distribution and consumption,” said Ali Lange, senior public policy analyst at Google. “It is exciting to see so many every day, real-world applications of A.I. and to work together with people from across so many different sectors.”

The report addresses food production A.I. technologies such as autonomous tractors, drones and remote sensors that collect and analyze data in order to help farmers increase crop yields. Cameras attached to drones may detect weeds and monitor crop health from hundreds of feet above. Predictive technologies may support farmers by aggregating an otherwise overwhelming amount of data and providing actionable insights to help them make decisions.

In food distribution, grocers may now use predictive ordering platforms to estimate how much food will be sold each day, thereby reducing costs and waste. Virtual stores featuring direct-to-consumer delivery may help to deliver fresh produce and healthful foods to food insecure communities.

Food delivery apps, nutrition tracking platforms and health databases are A.I. technologies that may impact food consumption. They are making it easier for consumers to improve their eating habits and overall health, Ms. Lange said. Researchers are also devising A.I.-powered tools to track and contain food safety outbreaks and identify sources of contamination. 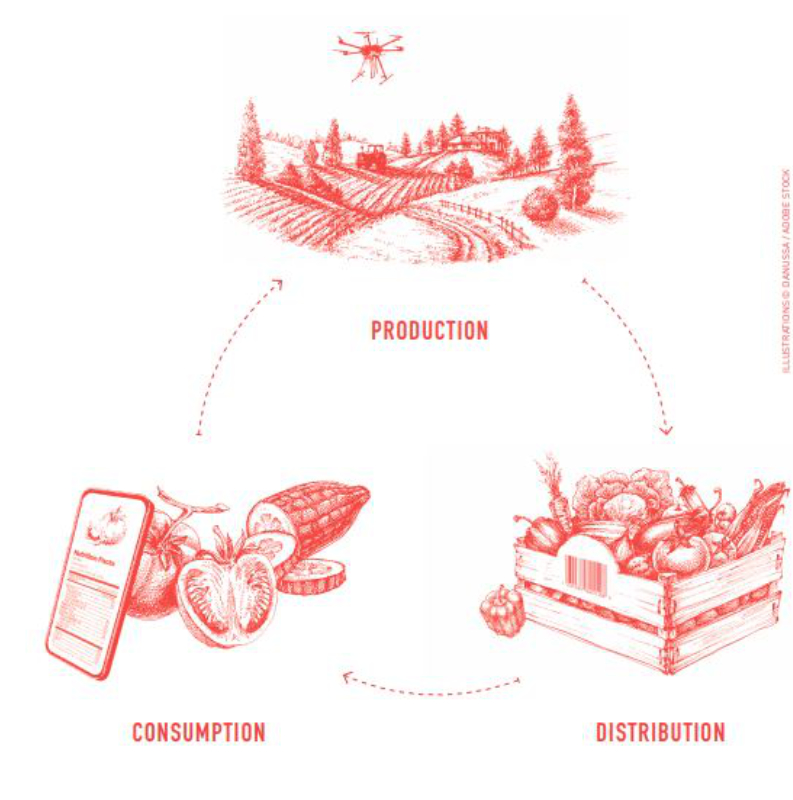 The Refresh Working Group published the report on Dec. 5, 2018, at an event at Google’s Chicago offices. The group currently has 27 members from throughout the food supply chain who seek to examine the intersection of technology and food through research, storytelling and collective action.

“Our aim is to build a strong coalition of people working to ‘refresh’ our nation’s food system in order to inform and influence public debates and policies that will help to ensure technology, agriculture and innovations across the food supply chain are developed and adopted for the common good,” said Danielle Nierenberg, president and co-founder, Food Tank, New Orleans, and founding member of the group. “The Refresh report is just the start of this conversation.

“It is the product of nine months of research, interviews, listening sessions and informal discussions with a wide range of people and organizations working in this space. Presenting a different framework for talking about these issues, the report offers a common starting point for thinking about and discussing the impact of emerging technologies on the way we produce, distribute and consume food.”

Former Secretary of Agriculture Tom Vilsack, president and chief executive officer of the U.S. Dairy Export Council, Arlington, Va., spoke with Ms. Nierenberg about the opportunities in bridging the divide between the different sectors of the U.S. food system, which he said is broken in many ways.

“We need to look at our regulatory systems, at large,” he said. “They were designed for days long ago.”

He explained how the science is often available to make improvements, but the U.S. does not have systems in place to allow prompt implementation, while competitive countries are much quicker to act.

Mr. Vilsack said he appreciated how the Refresh report addressed the entire food system, rather than separating the agricultural and food manufacturing sectors. It is this from soil to supper approach that attracted companies such as Google to get involved with A.I. for the U.S. food system.

“The report will evolve as we learn more about the costs and benefits, along with the challenges with technology in food,” Ms. Nierenberg said. “It’s about how technology — A.I. — can support the entire food system, not just production.”

Ms. Lange participated in a panel discussion led by Ms. Nierenberg and included working group members Don Bustos, owner of Santa Cruz Farms, Espanola, N.M., and Ankita Raturi, sustainable agriculture researcher with the U.S. Department of Agriculture, Washington. Ms. Lange said it is paramount for A.I. companies to address the question of whose problems are we solving? For the people involved in creating new technologies find common ground with the people and communities using them.

“If A.I. is meant to be a useful tool for food production, distribution and consumption, these systems must be designed to meet the day-to-day needs of farmers, retailers and food workers,” Ms. Lange said.

Ms. Raturi added, “There are all these perils if we start to design technology without the participation of the different system stakeholders.”

Small operators are especially fearful of taking risks. Technology must be reliable for it to be useful. There is not a lot of margin for error, said Mr. Bustos, who was an early adopter of solar technologies for year-round food production. His community depends on his harvest as a critical food source, so he pointed out that any A.I. applications on his farm must be both affordable and reliable, or he risks a poor crop yield. He identified several barriers to adoption and the multiple reasons they may be out of reach for some would-be tech users.

Those concerns drive home the practical importance of bringing people together to work through these kinds of issues. That is the conversation of The Refresh Working Group.

The full report “Food + tech: Soil to supper” may be downloaded here.