We use cookies to provide you with a better experience. By continuing to browse the site you are agreeing to our use of cookies in accordance with our Cookie Policy.
Home » The basics of C.B.D.

The basics of C.B.D.

CHICAGO — No ingredient is attracting greater interest in the food and beverage space than cannabidiol (C.B.D.). Entrepreneurs are rapidly bringing concepts featuring the ingredient to market, many larger companies are curious but taking a wait-and-see approach and retail and food service operators are challenged to find ways to approach the category.

“In my opinion, if you label with C.B.D. you are taking a regulatory risk,” said Justin Singer, co-founder and chief executive officer of Stillwater Brands, Commerce City, Colo., a processor of consumer-packaged goods featuring C.B.D. and manufacturer of a soluble form of C.B.D. to be used as an ingredient. “There is no clever language around it. This is not completely legal. This is tolerated.”

Understanding the regulatory status of C.B.D. is a challenge. The passage of the farm bill in December 2018 meant the ingredient was no longer a controlled-substance regulated by the Drug Enforcement Agency. The Food and Drug Administration, however, retained its authority to regulate the ingredient. Specific statutory provisions in the Federal Food and Drug Cosmetic Act say a drug cannot be formulated into a dietary supplement or food. In July 2018, C.B.D. was approved to be an active ingredient in a drug product.

“So, under F.D.A.’s law it can no longer be used as a food or as dietary supplement, because of that particular activity,” Ms. Sanzo said. “What the F.D.A. doesn’t object to is the use of hemp seed oil in food. The same day it issued its policy statement around the regulatory status of C.B.D. it also approved hemp seed oil as being generally recognized as safe.”

While the federal regulatory status of C.B.D. is murky, it is even murkier at the state and local level, Ms. Sanzo said.

“We are seeing lots of activity here, and it’s much more serious activity than at the federal level,” she said. “The situation seems to be changing day to day. It is both at the state and local level where authorities are running around saying you can’t sell food with C.B.D. because it’s an unsafe food additive. New York City is a perfect example. You have to maintain your current knowledge around state laws, because that is where all of the action is.” 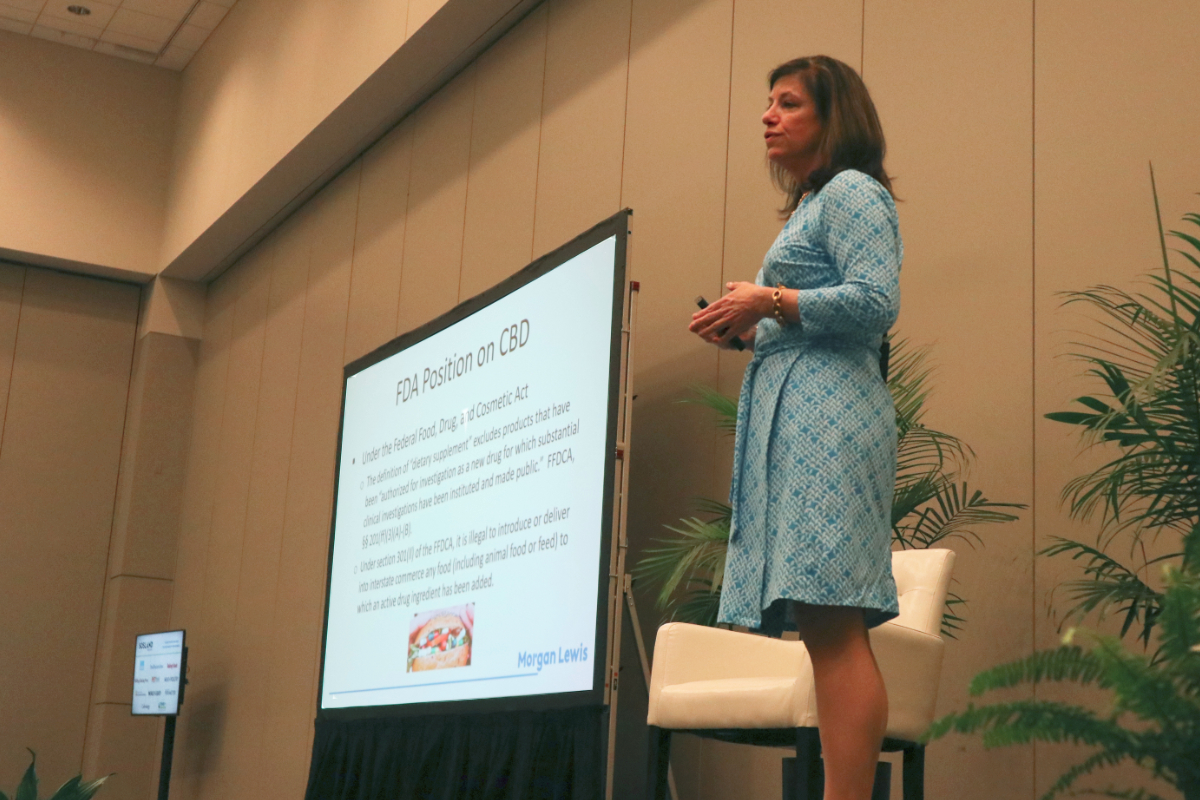 Getting to the good stuff

Mr. Singer said a challenge for anyone trying to research the C.B.D. market is a lack of standardization.

“People are using words that mean many different things,” he said. “Without good standards of identity you can’t have a scientific conversation.”

He noted that a common misnomer is the distinction between cannabis and hemp.

“This is a legal distinction and not a horticultural distinction,” he said. “It’s the same plant. Cannabis sativa is the cultivar. Cannabis is grown for medicinal or recreational purposes with T.H.C. concentrations of greater than 0.3% by dry weight. Hemp is less than 0.3% T.H.C. dry weight. In the field a plant can move from hemp to cannabis within a week.”

“There are 113 known and isolated ones so far of which T.H.C. and C.B.D. are only two,” Mr. Singer said. “Terpenes are just essential oils. I think people wildly overplay the value of them.”

“I think people, in their minds, confuse the process of deriving hemp seed oil vs. C.B.D. oil,” he said. “The analog of hemp seed oil is olive oil. It’s an expeller process. You press the hell out of it and filter.

“C.B.D. requires much more control. It actually requires a great deal of effort to get down to the target product.”

The extraction process begins with hemp biomass that goes through an extraction and purge process. The purpose is to extract oils of interest from the biomass, remove extraneous plant materials and concentrate the lipid-based materials.

“Then you get full-spectrum hemp oil,” Mr. Singer said. “This is what people ask for, but it’s not what they want.”

Full-spectrum hemp oil is then put through winterization, a filtration step designed to remove all remaining plant matter.

“This is important, because hemp is a crop that absorbs things from the soil,” Mr. Singer said. “You don’t want what’s in the hemp plant matter.”

After winterization and filtration, solvents are removed, and processors are left with a dark brown refined C.B.D. oil. Processors then refine the ingredient further into a distillate C.B.D. oil.

“From here you can go one of three ways,” Mr. Singer said.

“I just showed you three different end products,” Mr. Singer said. “That’s my standard of identity. There are too many ambiguous terms applied to different materials.”

Mr. Singer encouraged anyone with experience in food and beverage manufacturing to approach the C.B.D. market with caution.

“I have been in food for only two years, but I have noticed that supply chains are robust,” he said. “These are supply chains that have built up over the course of decades.

“(C.B.D.) is a new supply chain from seed to sale. It is sorely lacking in a lot of areas. You are used to having an infrastructure; you are used to being able to trust what people tell you. Stop that.”

Yet despite the lack of sophistication in manufacturing standards, Mr. Singer sees promise in the future of C.B.D. He pointed to a survey by the investment firm Cowen that showed the U.S. C.B.D. market may represent a $16 billion opportunity by 2025. Specifically, Cowen found that 6.9% of consumers have tried C.B.D. as a supplement. That compares to 4.2% of consumers who have tried the e-cigarette brand Juul.

“That’s a market,” he said. “I truly believe C.B.D. and other cannabinoids are an exceptionally promising class of bioactives, but if that is true then we need less optimism and more skepticism.”