We use cookies to provide you with a better experience. By continuing to browse the site you are agreeing to our use of cookies in accordance with our Cookie Policy.
Home » Burger King’s Impossible Whopper to go national later this year

TORONTO — Burger King plans to offer its plant-based Impossible Whopper at a national level later in the year after a successful test run in the St. Louis market.

“We’ve been encouraged by the test market feedback so far and plan to expand to a few more select test markets around the country this summer as we prepare for a national launch later this year,” said José E. Cil, chief executive officer of Restaurant Brands International, Inc., in an April 29 earnings call.

“We generated more than 6 billion media impressions, and we’re seeing a solid sales opportunity for the business,” Mr. Cil said. “We think it’s very much in line with our brand position. Burger King is all about delivering flame-grilling excellence to our guests, and this product fits that right in the sweet spot, and we think there’s incremental growth to our core business here, and we’re not seeing guests swap the original Whopper for the Impossible Whopper. We’re seeing that it’s attracting new guests.”

Comparable sales growth for Burger King was 2.2% in the first quarter ended March 31. System-wide sales were $5,289 million, up 2.7% from $5,149 million. A spicy nuggets introduction was effective, Mr. Cil said, and the Big King XL performed well, but a grilled chicken sandwich did not perform to company expectations. 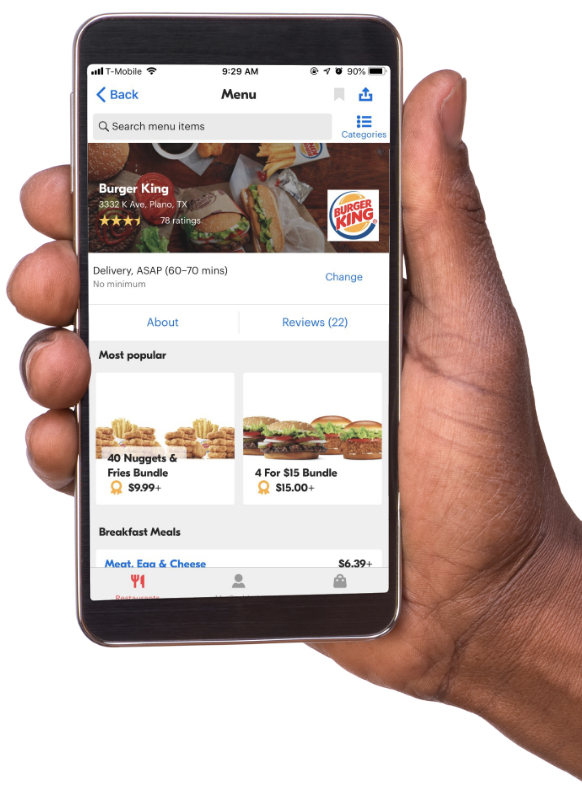 Nearly half of the Burger King restaurants in the United States now offer delivery.

Companywide, Restaurant Brands International’s net income attributable to common shareholders in the quarter was $135 million, or 53c per share on the common stock, down 9% from $148 million, or 60c per share, in the previous year’s first quarter. Total revenues of $1,266 million were up 1% from $1,254 million,

Matthew Dunnigan, chief financial officer for Restaurant Brands International, attributed a decline in income to a higher effective tax rate of about 19%, versus zero last year.

“Technology at Popeyes remains the key focus for us, and we’re really excited about the opportunity both near term and long term,” Mr. Cil said. “On delivery, we’ve grown the number of participating restaurants to nearly 1,300 locations within the U.S., up from almost none at the beginning of last year.

“Our data (continue) to show that delivery is driving incremental tickets by making our great products more accessible to a wider range of guests, and we see that orders through this channel tend to have a significantly higher average check. We believe there’s still an immense runway to grow delivery, both in restaurants that already offer it and by expanding the number of restaurants participating.”

Comparable sales growth for Popeyes Louisiana Kitchen was 0.6% in the first quarter. System-wide sales rose 6% to $955 million from $903 million.

“We still believe the 33-year-old ‘Roll Up The Rim’ program is a valuable and iconic platform for Tim's,” he said. “It has very high awareness. However, it’s become clear to us that it needs a modern and fresh approach to engage our guests in a stronger way going forward. The Tim's team is working on new plans to drive a successful reboot of the program next year, including seamless digital integration.”