CHICAGO — Sprouted mung beans and lotus root crisps are among new formats competing for shelf space in the supermarket snack aisle. Puffed quinoa is popping up in chocolate bars, portabella mushrooms are masquerading as meat jerky, and cauliflower is replacing grains in pretzels and tortilla chips.

Such products may be seen at the Sweets & Snacks Expo this week in Chicago.

“Unusual ingredients, I think, is a bit of a perpetual trend,” said Carly Schildhaus, public affairs manager for the National Confectioners Association (N.C.A.), Washington, which produces the annual event.

An estimated 15,000 industry professionals were expected to attend the trade show, held May 21-23 at McCormick Place, to view and taste new confections and snacks debuting from approximately 825 exhibiting companies.

Collectively representing more than $86 billion in annual U.S. retail sales, the snack ($51 billion) and confectionery ($35 billion) markets are measured as the second and fourth largest consumable categories, respectively, according to data from the N.C.A. Product innovation is key to driving continued growth in the confectionery and snack industries. New products account for nearly 5% of sales in the snack category and more than 6% of sales in the confectionery category, which compares to about 3% of sales for overall consumer packaged goods.

“There are always thousands of new products that debut at the show, and there are a lot of different things we’re seeing in terms of flavors and the products themselves, but what we think is really interesting is the industry leadership as it relates to helping people manage their sugar intake,” Ms. Schildhaus said. “You’ll be seeing a lot of products in smaller pack sizes, specifically package sizes of 200 calories or less… I think we’ll see it more prominently this year than in past years.” 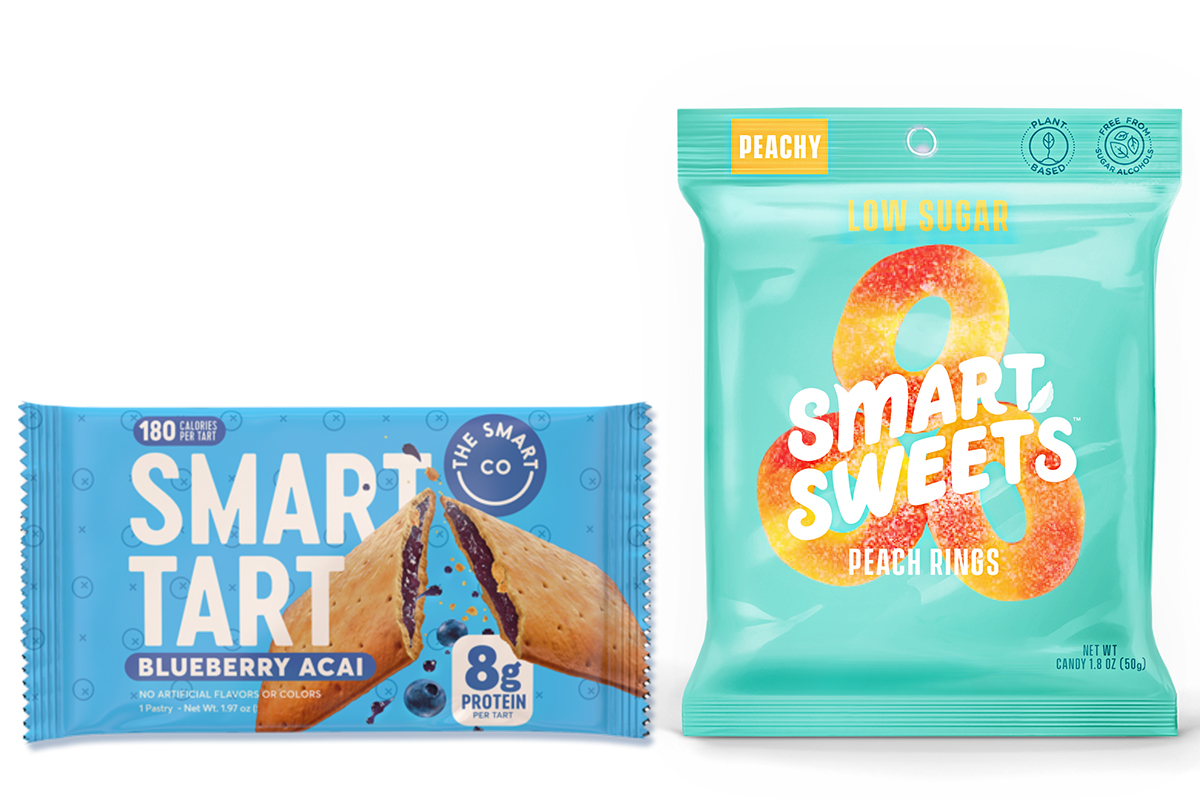 Smart is the new skinny

As consumers shift away from a traditional diet mindset in pursuit of holistic wellness, brands previously marketed as “thin,” “lean” or “skinny” are embracing new descriptors, such as “smart.”

Debuting at Sweets & Snacks is Smart Tart, a better-for-you take on the toaster pastry. Smart Food Co. L.L.C., Costa Mesa, Calif., offers a range of flavors, including blueberry acai, strawberry chia and cinnamon, with 8 grams of protein, 180 calories and 50% less sugar than the average brand, according to the company.

SmartSweets, Vancouver, B.C., is expanding its portfolio of reduced-calorie candies with Peach Rings gummies. Sweetened with stevia, the product has 85% less sugar than traditional candy with no artificial ingredients. Like all other SmartSweets products, which include gummy bears, sour gummies and sweet fish gummies, each serving has 3 grams of sugar and 80 calories. 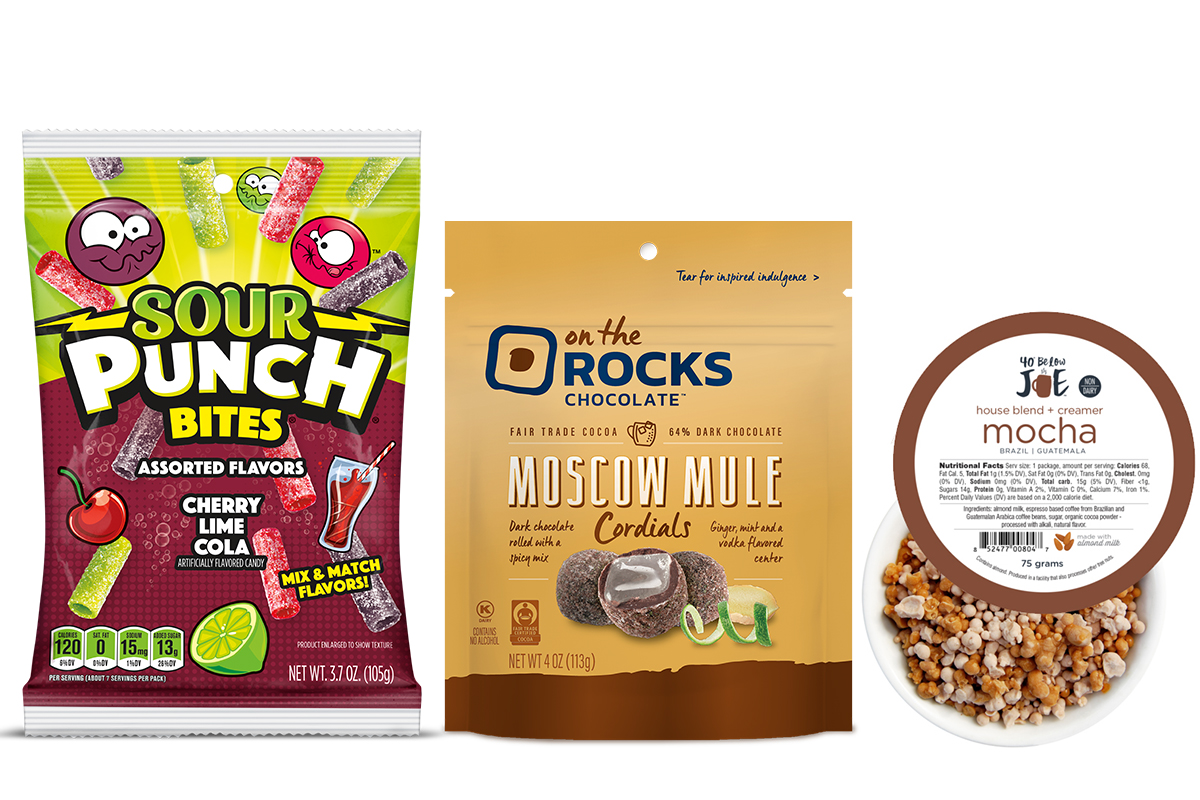 Beverage flavors are bubbling up

Cocktails, coffee and cola are trending tastes in confections and snacks launching this year.

Other innovations at the show offer new ways to consume coffee. From the creator of Dippin’ Dots, 40 Below Joe, Carbondale, Ill., features frozen beads of coffee and dairy-free creamer in a range of flavors, including french vanilla, hazelnut, salted caramel, mocha and house blend. Tierra Nueva Fine Cocoa, Miami, is debuting Nudge Coffee Butter, a spread made entirely from Italian roast coffee beans.

Tea flavors are brewing in such products as layered matcha cream wafer cookies and a chai chocolate bar.

From Kopper’s Chocolate, Jersey City, N.J., On the Rocks Chocolate cordials contain a liquid center inspired by libations such as vodka and tequila. Wrapped in dark chocolate, the alcohol-free bites are available in Moscow mule, cold-brew coffee, barrel-aged bourbon and strawberry margarita varieties. 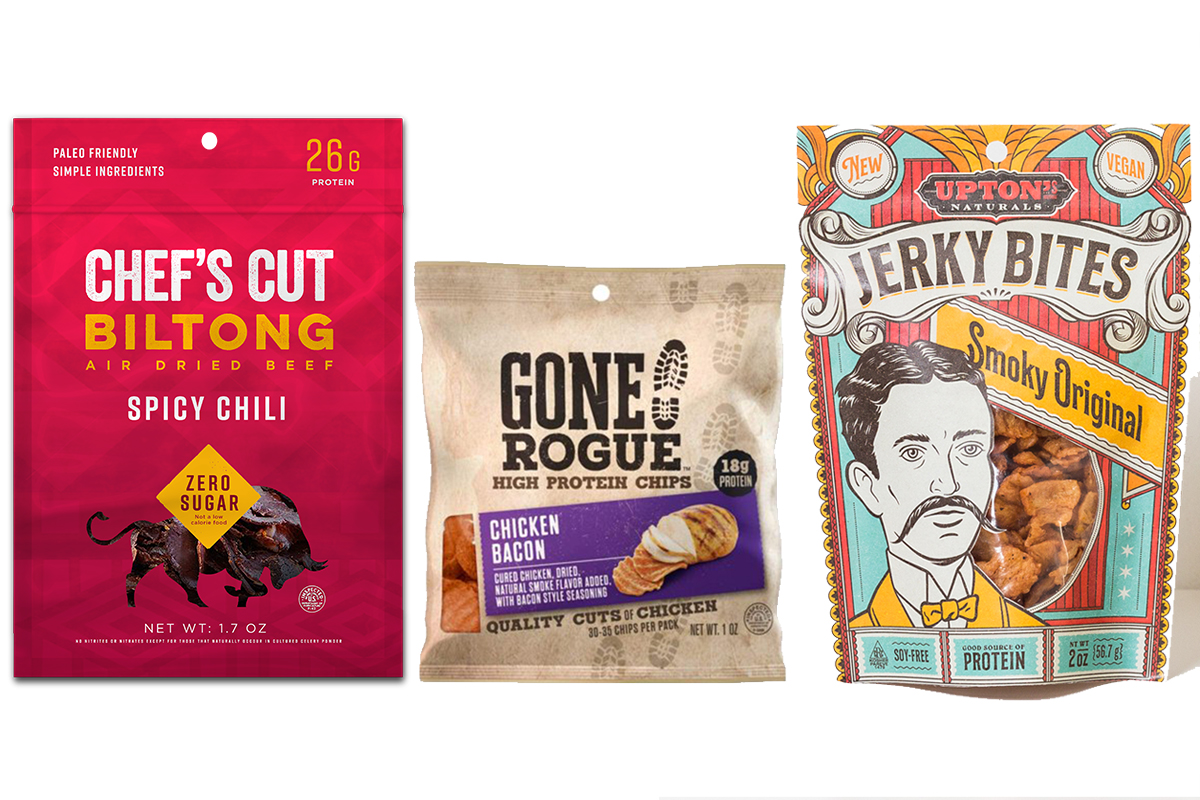 The meat snack category is expanding with new formats and flavors as brands aim to remain competitive in the crowded marketplace.

Meat snack companies also may differentiate with texture. DE.HI Foods, Honolulu, offers crispy beef and pork jerky that “eats like a chip,” according to the company. Land O’Frost, Munster, Ind., recently introduced Gone Rogue, a crispy snack made from chicken that has been smoked, sliced, baked and seasoned.

Yet another take on the premium jerky trend are new vegan varieties made from ingredients such as mushrooms or fruit. Upton’s Naturals, Chicago, is introducing Jerky Bites made with wheat seitan in several flavors, including tamarind pepperoni, pineapple pink peppercorn and tarragon ginger lime. Each serving provides 8 to 10 grams of protein and 90 to 100 calories with a texture and chew similar to that of traditional beef jerky, according to the company. 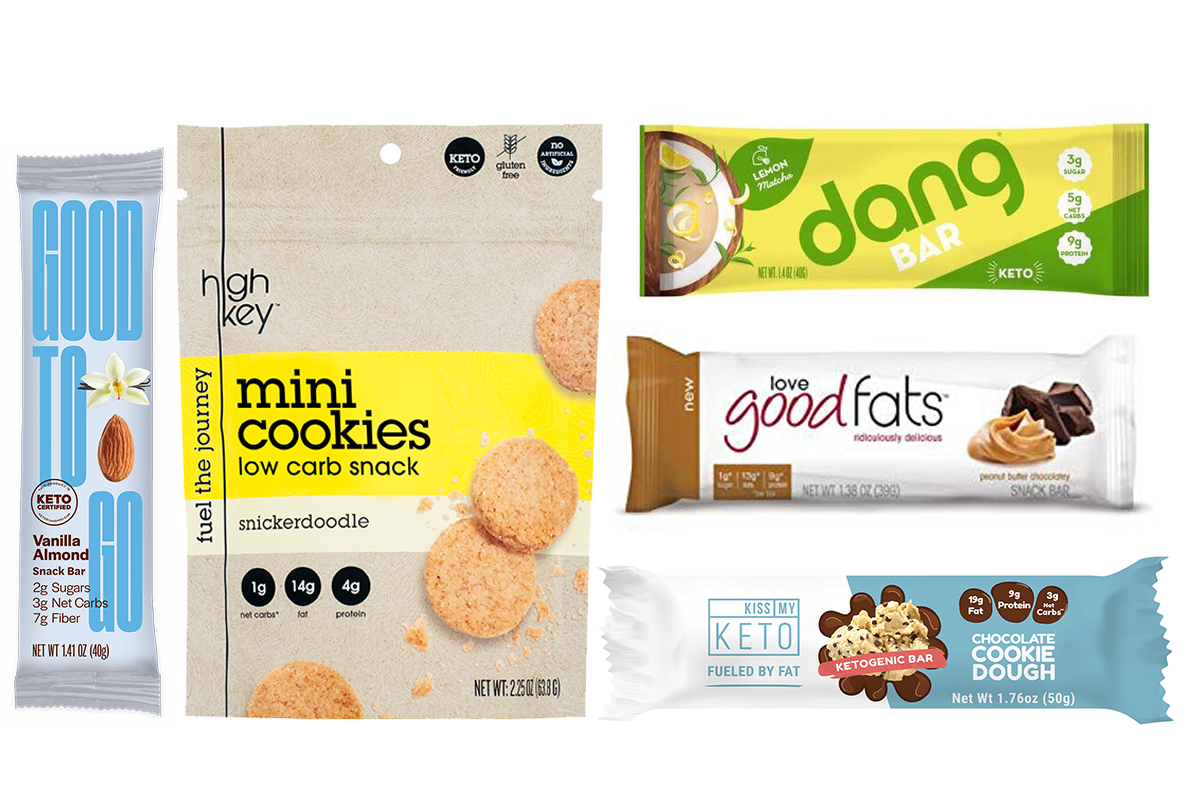 Such products are loaded with oils, nuts and seeds to help consumers achieve ketosis, a metabolic state linked with weight loss and performance benefits. Low-calorie sweeteners such as erythritol, stevia and monk fruit are key to keeping sugar low.

HighKey Snacks from Summit Naturals Inc., Blaine, Wash., is a brand of savory and sweet snacks marketed as low-carb and keto-friendly. Products include crunchy cheese bites made with cheddar and egg whites, bite-size cookies and nut butter made with macadamia nuts, pecans, hazelnuts, chia and pumpkin seeds. 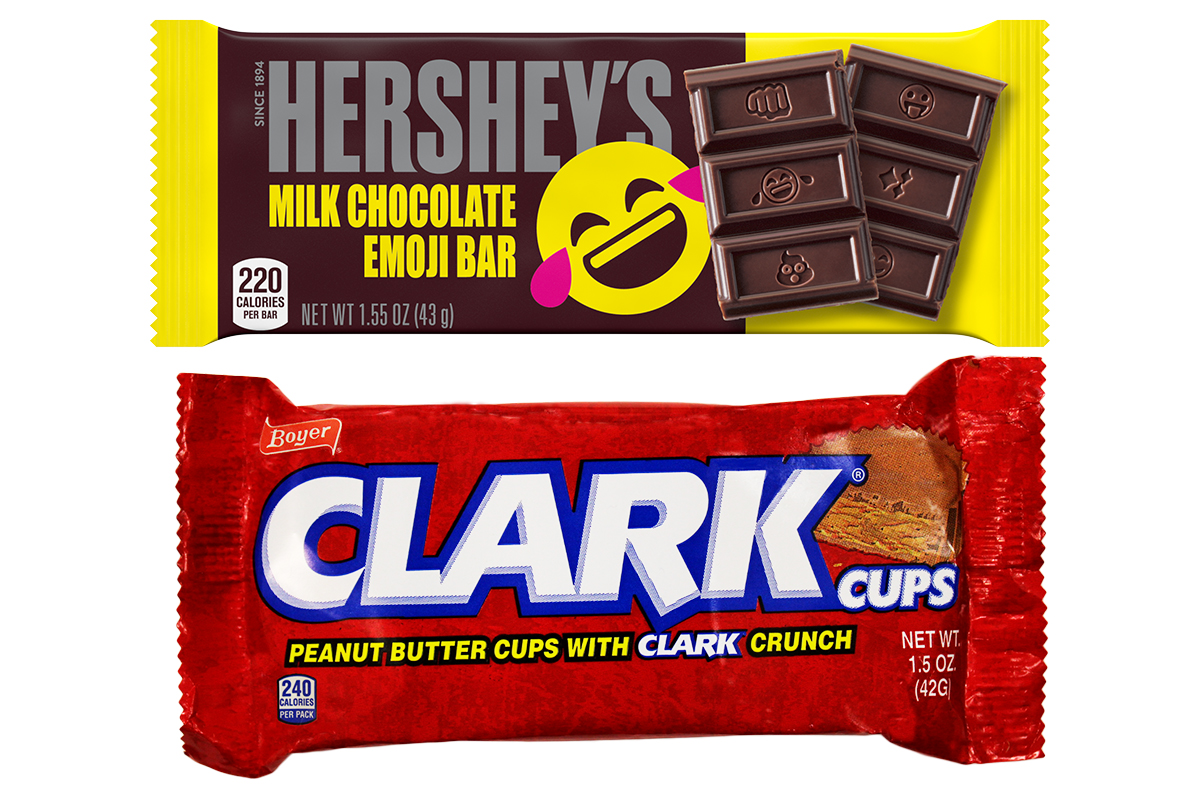 Boyer, which produces the Mallo Cup, bought the rights, recipes and equipment for the Clark Bar brand in 2018 after its previous owner, The New England Confectionery Co., filed for bankruptcy.

“It is very gratifying to bring the Clark name back to its home state of Pennsylvania, along with giving the classic candy a new twist,” said Anthony Forgione, president and chief executive officer of Boyer.

The Chick-O-Stick from Atkinson Candy Co., Lufkin, Texas, features an updated recipe with simple ingredients and more peanut butter. The product, characterized by its flaky, crunchy combination of peanut butter and toasted coconut, originated in the 1940s. Atkinson said it has removed artificial red and blue coloring in favor of colors derived from turmeric and vegetable juice concentrate.

The Hershey Co., Hershey, Pa., is debuting a new design for its namesake milk chocolate bar for the first time in its 125 years with the launch of its limited-edition Hershey’s Milk Chocolate Emoji bar.

“Our classic Hershey’s bars were made to be shared with others,” said Kriston Ohm, senior manager, Hershey’s brand. “By adding an emoji design to each pip of chocolate, we hope that parents and kids are inspired to share a chocolate emoji and make a connection with someone new.”