Health is one reason people seek plant protein. In the 2019 Food and Health Survey from the International Food Information Council Foundation, Washington, more than 70% said they perceived protein from plant sources as healthy.

The environment is another reason.

“Across society over the last few years, there’s been a real shift and growth in consumer awareness of plant proteins and particularly pea protein as a more sustainable protein source,” said Johann Tergesen, president and chief executive officer of Burcon NutraScience Corp., Vancouver, B.C. “Climate change is changing personal consumption habits. One major transformation is that many more people today understand the value of plant proteins and why changing one’s diet to consume less meat and more plants is an important personal step in addressing climate change.” 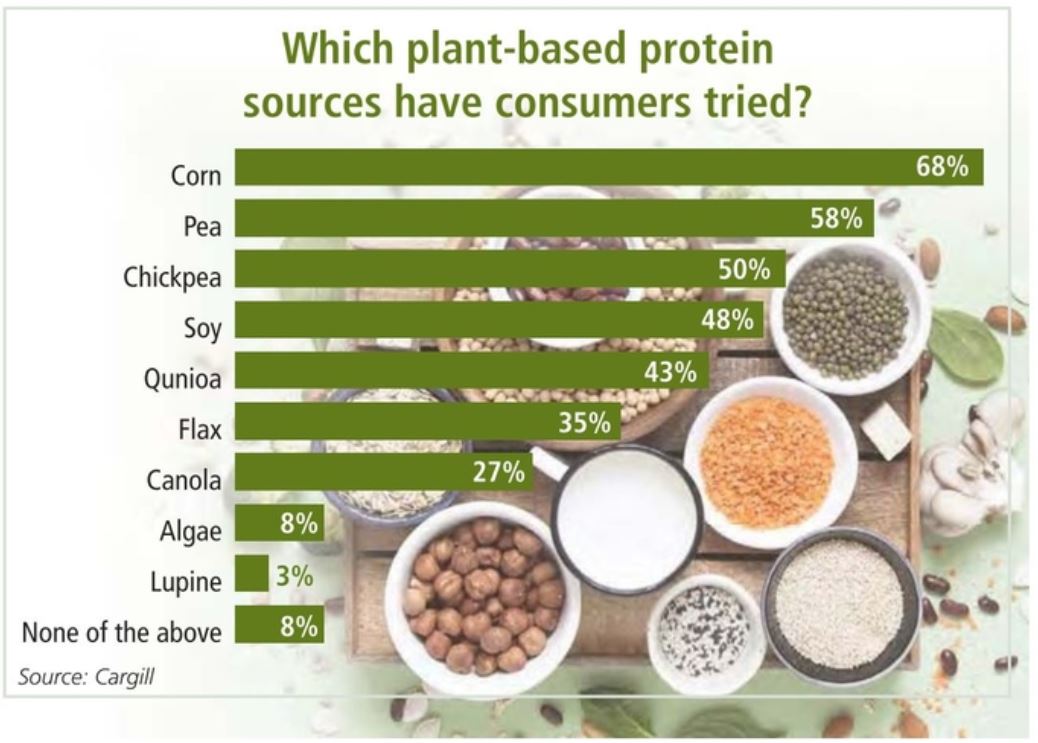 Cargill invested in plant protein last year in the form of a joint venture agreement with Puris, the largest North American producer of pea protein.

Other companies are expanding in plant protein, too.

Burcon NutraScience Corp. and an investor group have created a joint venture partnership to build a C$65 million commercial production facility for pea protein and canola protein in Western Canada. The facility initially should process about 20,000 tonnes of peas per year to produce the company’s Peazazz and Peazac pea proteins. Burcon’s Supertein, Puratein and Nutratein canola proteins also will be produced at the facility.

The joint venture will be called the Burcon Functional Foods Corp.

Food companies already have performed trials of their products with canola protein or pea protein ingredients from Burcon, Mr. Tergesen said. The protein content in the ingredients exceeds 90%.

“We expect you will see products incorporating Burcon pea and canola proteins to start appearing on store shelves shortly after our processing facility has been commissioned, which we currently estimate to be around the middle of 2020,” he said. “Customers who are interested in using our proteins can now move forward with confidence that our protein ingredients will be available next year.”

Plant protein was found in booths at IFT19, the Institute of Food Technologists’ annual meeting and exposition held June 2-5 in New Orleans. 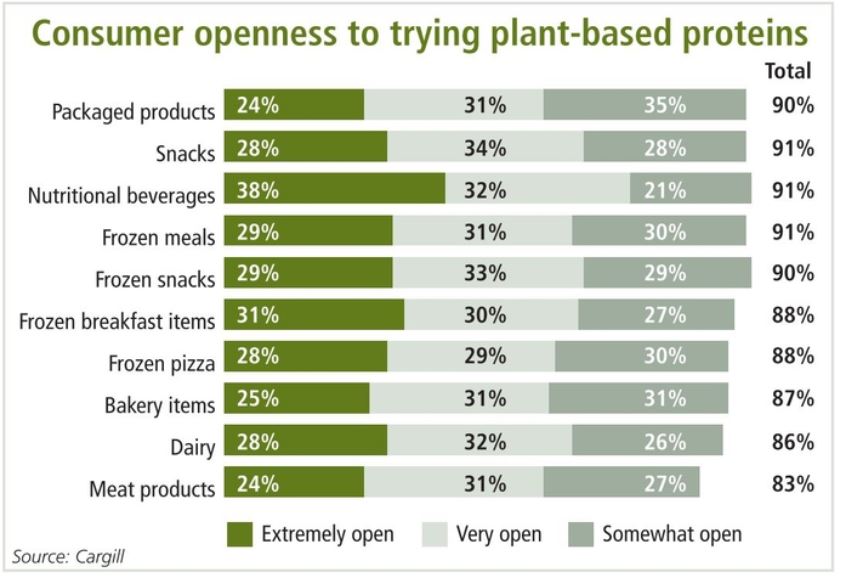 Representatives of Cosucra USA at IFT19 explained how the company’s Pisane pea protein may work in grain-based foods like gluten-free bread and protein bars as well as other items like plant-based burgers and almond-based milk alternatives. Cosucra USA is part of Cosucra Group, Warcoing, Belgium.

Peas, chickpeas, lentils and beans all are pulses. They are a low-fat source of protein with a high-fiber content and low-glycemic index. Minerals in pulses include iron, potassium, magnesium and zinc.

“Blue Diamond almond protein powder has a clean taste and an extra-fine texture,” said Jeff Smith, director of marketing for Blue Diamond Almonds Global Ingredients Division. “These are important differentiators from other plant-based proteins and ones that developers find especially appealing as they look to formulate new products.”

Almond protein is an excellent source of biotin, phosphorous, copper, magnesium and manganese and a good source of calcium, potassium, zinc and iron. It is compatible with complementary proteins, including plant-based sources and dairy sources, which allows for the creation of products with complete amino acid profiles. 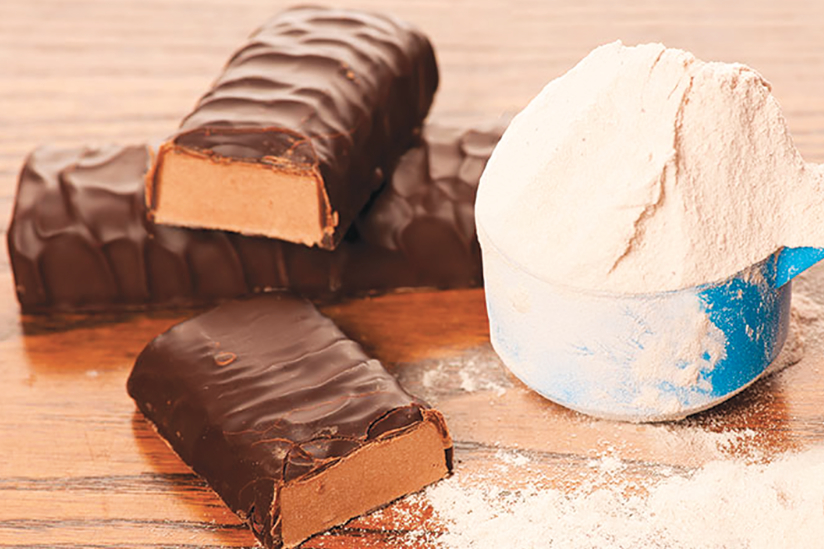 Grand View Research, Inc., San Francisco, forecasts the global almond protein market to expand at a compound annual growth rate of 5.8% to reach $491.2 million by 2025. The United States stands as the dominant player in the production and consumption of almonds while the United Kingdom, Germany and China are other major consumers of almond products, according to Grand View Research.

Manildra Group USA, Leawood, Kas., offers GemPro Prime-E wheat protein isolate that improves the extensibility of dough with an addition as low as 2% of the formulation. 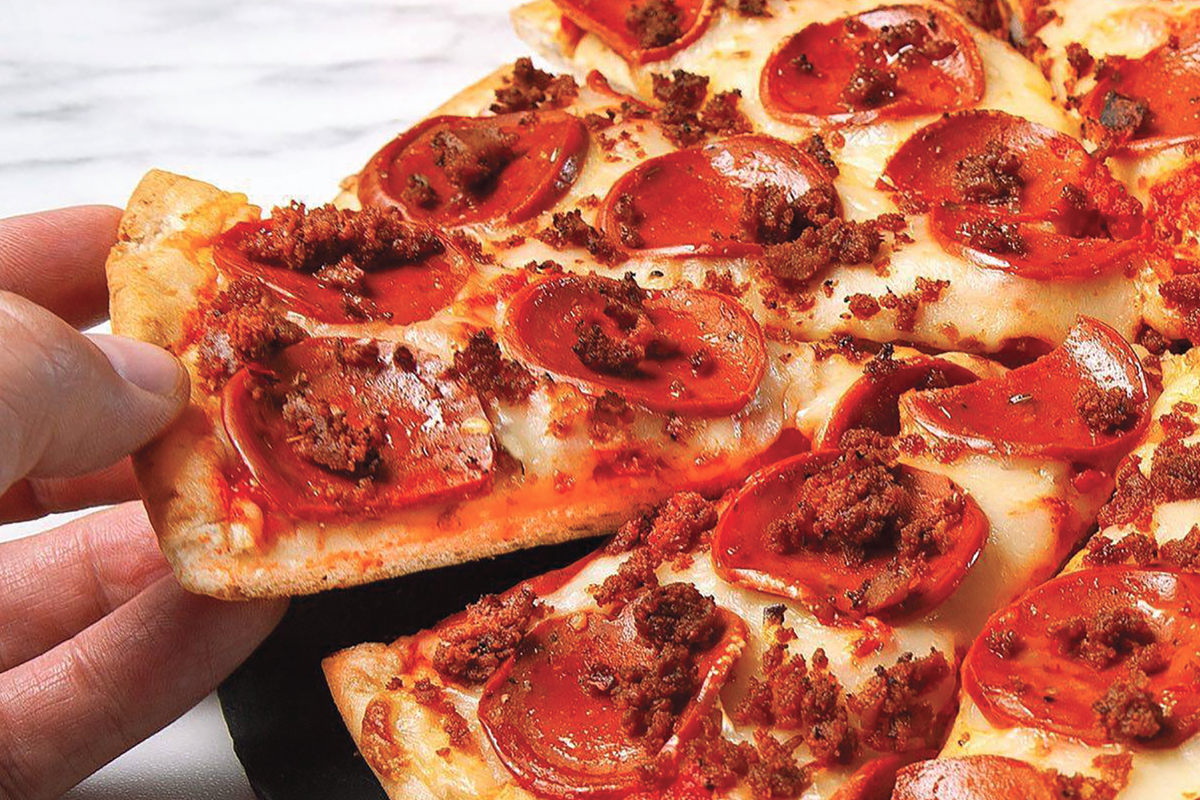 Products such as the Impossible Burger and the Beyond Burger have proven meat alternatives sell, and meat alternatives could be used in several grain-based foods categories as well. Think pizza toppings and taco fillings.

“First and foremost, consumers want food that tastes good,” said Tyler Lorenzen, president of Minneapolis-based Puris. “That’s where our texturized pea protein comes in. By turning our great-tasting T.P.P. into something familiar like ground beef, it provides shoppers with another alternative to meat-based products. If something tastes great, is good for the consumer and even better for the environment, it makes the right choice the easy choice.” 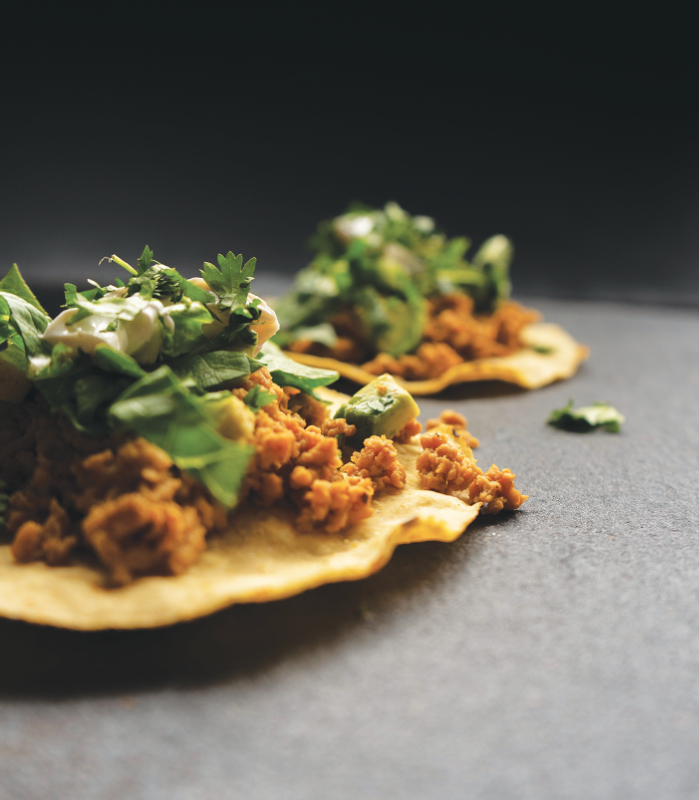 PLT Health Solutions, Inc., Morristown, N.J., and innovation partner Nutriati, Inc., Richmond, Va., created pizza at IFT19. Meatless sausage crumbles on the pizza were made with Artesa chickpea protein and Artesa chickpea flour. Cookies, crisps and snacks are other potential applications for Artesa chickpea protein, which has a small, uniform particle size, a white color and a neutral flavor. Environmental benefits of chickpeas include a low carbon footprint and less use of fertilizer, water and pesticides in crop production.

Pizzas with plant-based meat alternatives already are on the market.

Pieology, a pizza chain based in Rancho Santa Margarita, Calif., offers three toppings: spicy Italian sausage rounds, beef meatball and diced chicken that are vegan and contain no cholesterol. The toppings are made with vegetables and contain soy. The diced chicken topping contains about 20 grams of protein per serving. The spicy Italian sausage rounds provide about 14 grams of protein per serving, as does the beef meatball.