We use cookies to provide you with a better experience. By continuing to browse the site you are agreeing to our use of cookies in accordance with our Cookie Policy.
Home » Hardee’s to test two plant-based menu items with Beyond Meat

FRANKLIN, TENN. — Hardee’s plans to test a pair of plant-based menu items in select markets in October through a partnership with Beyond Meat. The Original Beyond Thickburger, featuring a charbroiled plant-based patty, and the Beyond Sausage Biscuit, topped with a plant-based breakfast sausage, may eventually roll out to Hardee’s restaurants nationwide.

CKE Restaurants Holdings, Inc., the parent company of Hardee’s and Carl’s Jr., previously partnered with Beyond Meat, El Segundo, Calif., to introduce the Beyond Famous Star plant-based burger at Carl’s Jr. locations at the beginning of the year. The launch has exceeded the company’s expectations, said Owen Klein, vice-president of global culinary innovation at CKE Restaurants.

“We’ve sold over 4 million Beyond Famous Stars since launching last year, being the first major Q.S.R. to launch a plant-based burger,” Mr. Klein told Food Business News. “It’s endearing to our current customers that know and love our charbroiled burgers, but we’re also attracting a whole other demographic.”

The Franklin-based company has more than 3,800 franchised or company-operated Hardee’s and Carl’s Jr. restaurants in 44 states and 43 countries and U.S. territories.

In a recent interview, Mr. Klein discussed the company’s collaboration with Beyond Meat and offered a peak into the menu development process at the two quick-service restaurant brands.

Food Business News: What did you learn from launching a plant-based burger at Carl’s Jr.?

Owen Klein: We’ve learned a lot. A lot of promising things, too. A lot of things that surprised even us.

We’re taking a lot of key learnings from our launch seven or eight plus months ago at Carl’s and applying them to the burger landscape at Hardee’s, where we’re launching the original Beyond Thickburger. We’re leveraging our Thickburger heritage and equity that our Hardee’s consumers know and love and layering a 100% plant-based charbroiled burger into that.

For breakfast, we’re launching the Beyond Sausage Biscuit. We’ve developed a brand-new breakfast sausage with our partners at Beyond Meat and are selling it on our made-from-scratch biscuits at Hardee’s. Again, we’re taking key learnings from one brand and applying it to the other.

At Hardee’s, we sell a lot of biscuits. Just last year, we sold 250 million of them. In our densest areas, we have a very loyal following for breakfast and a lockdown on a lot of that traffic. The reason primarily for that is because we’re actually making biscuits from scratch.

We’re actually taking flour mix, adding buttermilk to it, kneading, rolling, cutting, baking every 15 minutes. These biscuits are made straight-up, Southern grandma-style, and you can tell when you eat it. It doesn’t taste like something that’s sat in the freezer for a long time.

How do you decide in menu development what will work for each brand?

Mr. Klein: The short answer is test, test and retest. Our rigor of testing … goes about six levels deep. Seeing if the idea resonates right from the beginning and then working on finetuning builds and flavors and recipes by getting the product in front of consumers multiple times before ever taking it to a restaurant-level market test. Then we do one or two of those before making the final decision whether or not to put it on the menu. 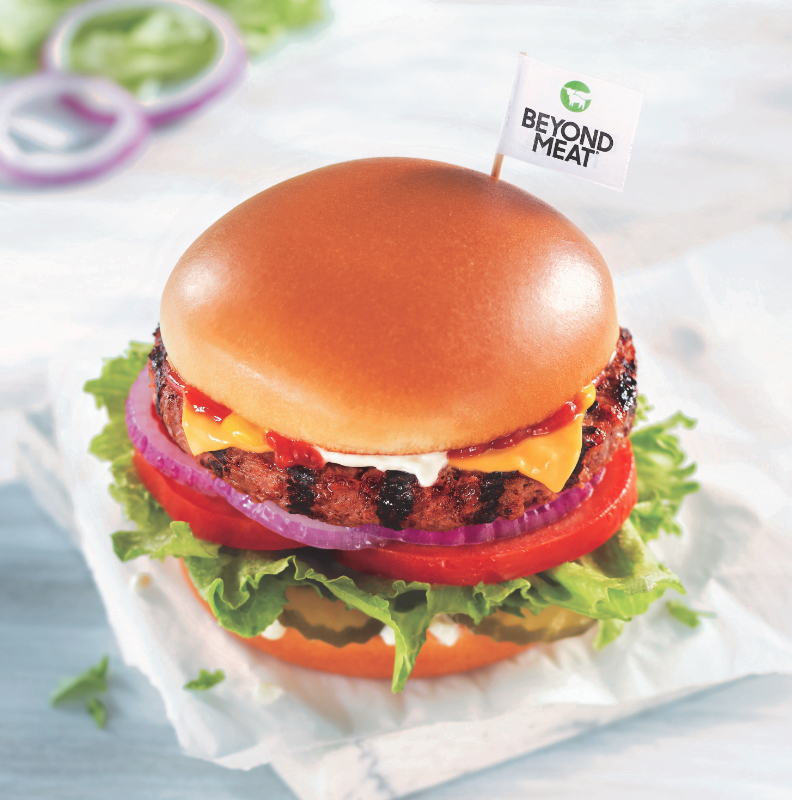 There are a lot of broad reaching flavors out there. Obviously we’ve struck a chord with burgers between both brands. On top of burgers, the fact that we’ve leaned into charbroiled flavor so much — we hang our hats on it, there’s not a lot of players out there doing a charbroiled burger — really speaks volumes about some of the similarities between palates across the country. We believe so much in our charbroiled equity, that we are standardizing our cooking medium throughout both brands to deliver a more consistent flavor, quality and product to our consumers.

Differences between the two is where we can lean into some fun regional preferences. While pimento cheese, for example, may index very high in the Southeast where we have about two-thirds of our Hardee’s, it may not do the same in Carl’s territory.

We can play around with toppings a bit and work with flavors that people identify more with regionally.

What operational considerations were made for adding the Beyond Burger to the restaurants?

Mr. Klein: We developed it around operations and back-of-house flow so it would be optimal for our franchisees to be able to incorporate into their systems easily. We developed it to deliver max flavor once charbroiled, which is a huge point of distinction between us and other restaurant chains that are serving Beyond or a plant-based burger. The charbroiler itself adds so much flavor that it makes it a special product.

Developing it for use in different builds, we wanted to make the product as versatile as possible. While we have flagship burgers — Beyond Famous Star and hopefully the test proves out for the Original Beyond Thickburger — you can put actually put the Beyond Burger patty on any burger build throughout the menu. We allow our guests to customize any way they want, and in developing a versatile product in the Beyond Burger patties, we took a look at all of those builds and did a rigorous look at whether or not that construct fit across the menu. And it does.

What led to the initial decision to add plant-based proteins to your menu? 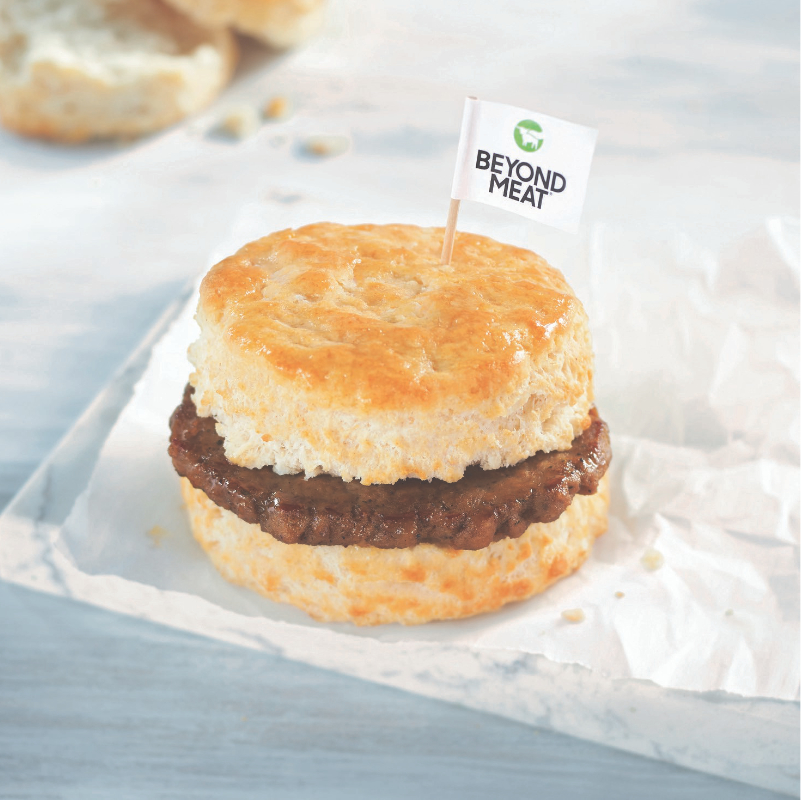 Mr. Klein: Taking a look at whether or not plant-based from a futurist perspective was going to be a fad or a trend. We have a top-notch consumer insights team that feeds us all types of data showing the plant-based craze specifically targeted for flexitarians was not going away any time soon. We saw it as an awesome whitespace to explore and to do so leveraging one of our most core products of all time in Famous Star.

How have you leveraged consumer insights in other parts of the menu?

Mr. Klein: Every single product that we put forward and test is developed through some kind of consumer insight. It all starts with research data with consumers, whether or not it’s our current consumers or aspirational consumers telling us what they want on the menu. Taking a look further down the road and not just matching what our competitors are doing but seeing what’s happening in independent restaurants, food trucks, seeing what’s getting big and getting big quickly and then seeing what’s here to stay on top of that.

A couple recent examples of where we’ve leveraged consumer insights would be the Bacon Truffle Angus Burger at Carl’s Jr. or the Honey Butter Chicken Biscuit at Hardee’s. Those were deeply seated in consumer insights and both for which we saw a ton of whitespace for an L.T.O. launch.

Back in April, Carl’s Jr. introduced a C.B.D.-infused cheeseburger at one restaurant location in Denver for one day. How did that go?

Mr. Klein: It blew the doors off. I can’t talk much more about it. Quite a sensitive subject these days. But it far exceeded our expectations.