We use cookies to provide you with a better experience. By continuing to browse the site you are agreeing to our use of cookies in accordance with our Cookie Policy.
Home » Coca-Cola Energy headlines slate of beverage innovation at NACS Show

ATLANTA — Coca-Cola Energy hasn’t hit retail shelves in the United States yet, but the beverage has generated plenty of buzz. The first Coke-branded energy drink launched earlier this year in Spain and Hungary and has expanded to 25 countries, including Great Britain, Ireland, Spain, Germany, Norway and Australia.

On Oct. 1, Coca-Cola Co. announced plans to debut the drink nationwide in January. The product was among dozens of new beverages previewed during the 2019 NACS Show, presented by the National Association of Convenience Stores, held Oct. 1-4 in Atlanta.

Coca-Cola formulated the product to draw new consumers to the energy category. Energy drinks are purchased by less than half of American households, said JC Harvey, director of retail channel strategy and commercialization for Coca-Cola North America.

“That’s really the opportunity for Coke Energy for both the Coca-Cola Co., but just as important, our customers, to bring people into the category,” Mr. Harvey told Food Business News at the NACS Show. “It’s designed to be more approachable versus everything else in the market, and to be more appealing, especially to people who have never tried an energy drink.”

Coca-Cola Energy features a “cola-forward taste” with 114 mg of caffeine per 12-oz serving, which compares to 34 mg in a 12-oz can of original Coca-Cola, plus B vitamins and guarana extracts. Varieties include original, cherry, zero-sugar original and zero-sugar cherry.

“Our new innovations are really designed to meet the changing needs and preferences for today’s consumers,” Mr. Harvey said. “You’re going to see we’re entering categories, like energy, we’re introducing new flavors and into formats with the goal of continuing to drive category growth like we’ve done in the past.” 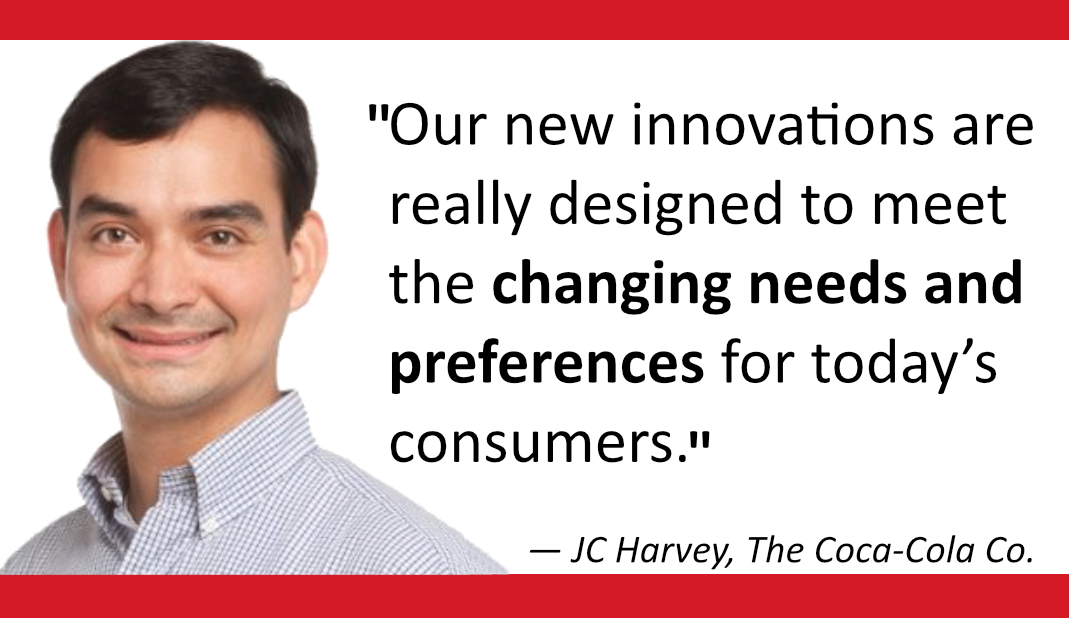 New flavors are joining the Coke lineup. Following the successful introduction of an orange vanilla variety, the brand is adding cherry vanilla in regular and zero-sugar options. Flavored colas are driving growth in the category, and cherry vanilla is the most popular combination consumers select on Coca-Cola Freestyle beverage dispenser machines, Mr. Harvey said.

A cinnamon cola flavor will be available for the holiday season. Coca-Cola Cinnamon previously was offered in the United Kingdom.

He added, “This is the most innovation we’ve had on Big Coke in a long, long time.”

A new Fanta offering is piña colada, which taps into a top flavor trend in food and beverage and demonstrated “the highest purchase intent of any flavor we’ve tested in the history of the Fanta brand,” Mr. Harvey said.

The company also is expanding its tea, coffee and enhanced water portfolio. Dunkin’ Cold Brew Coffee will be available in two lightly sweetened varieties, caramel black and midnight black, with 30 to 40 calories per serving. Simply Tea is a new line of brewed black tea blended with juice in raspberry, lemon and peach flavors. The Peace Tea brand is adding two flavors: mango and zero-sugar raspberry.

“[The new Smartwater line] really builds on the trend of people continue to ask more from their water." — JC Harvey, The Coca-Cola Co.

Smartwater, the leading premium water brand, is introducing four varieties that are lightly infused with a hint of fruit or herbal flavors, including pineapple kiwi, strawberry blackberry, cucumber lime and watermelon mint.

“This really builds on the trend of people continue to ask more from their water,” Mr. Harvey said. “They want hydration but also a little indulgence and flavor because just drinking regular water all day long gets a little boring.”

A range of zero-sugar smoothies is debuting under the Odwalla brand in three flavors: strawberries and cream, dark chocolate berry and vanilla matcha. The beverages are a good source of protein and designed to appeal to followers of the popular ketogenic diet, Mr. Harvey said.

Launching in January, Gomega is a new brand of “superfusion” beverages with omega-3 fatty acids and antioxidants. Flavors include berry acai, strawberry guava and mango passionfruit. The product was developed by a team at the Coca-Cola Co. dedicated to “transformational innovation” with the goal to ideate and commercialize products quickly.