We use cookies to provide you with a better experience. By continuing to browse the site you are agreeing to our use of cookies in accordance with our Cookie Policy.
Home » Consumer expectations moving beyond the label

Consumer expectations moving beyond the label

KANSAS CITY — Food and beverage manufacturers began responding to consumer demand for less processed products with shorter ingredient statements a decade ago. The early days of the clean label trend could be summed up in one word — simplicity. Today, clean label has many definitions, and manufacturers have moved beyond focusing on ingredient statements to bringing transparency to their production practices and supply chain.

The market research company HealthFocus International, St. Petersburg, Fla., published its “Clean conscience eating” report this year and noted how eating clean has evolved from clean labels and avoiding certain ingredients or products into something much bigger. What is different today is the shift by some consumers toward a more holistic way of thinking that everything that they put in their bodies has an important internal and external impact that influence health and well-being, according to the report.

“Clean eating became more prevalent and mainstream with the initial push of plant-based eating several years ago, which began as a health-based trend focusing on whole or unprocessed foods and a back-to-basics view on diets,” said Cali Amos, research manager for HealthFocus International. “That, along with a major push toward a sustainable planet, crops and food sources, people are tying what they eat to the source of the food and not just how it affects their body but how it affects the world around them.”

A report by Kerry, which has U.S. offices in Beloit, Wis., found consumers are more educated and intentional with their health and nutrition goals. In the company’s “Future of food: Unlocking consumer expectations for food and beverages beyond clean label” report, Kerry found consumers are looking beyond the consideration of clean label as a filter of unacceptable ingredients and are now more attentive to the added nutritional and functional benefits of the ingredients.

“With the growing familiarity and understanding of ingredients, claims, on-pack certifications and increased curiosity, consumers are spending that extra time to equip themselves with information,” said Soumya Nair, director of market insights for Kerry. “This is driving the increasing focus of ingredients being acceptable, nutritional, functional and sustainable.” 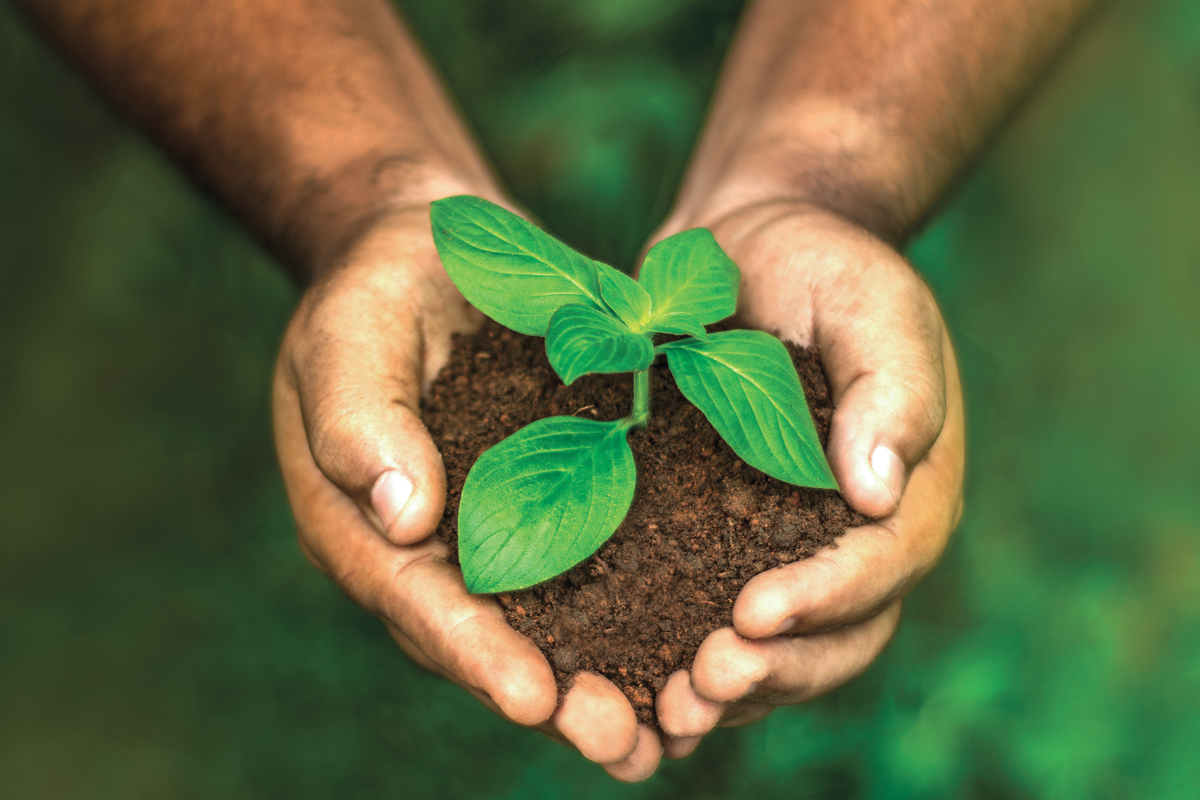 Sustainability’s role in the clean label trend is something Christopher G. Hansen, assistant vice-president and culinary and corporate executive chef for OSI Industries, L.L.C., Aurora, Ill., a manufacturer of value-added food products for the retail and food service industries, said he sees every day.

“As an example, we may not use certain ingredients that are related to deforestation, such as palm oil from the Amazon rainforests,” he said. “We have also been removing artificial colors, flavors and preservatives in response to customer requests and consumer preferences for cleaner labels.”

Ms. Nair added, “In North America, and the U.S. particularly, sustainability has grown from a nice-to-have to a key trigger for consumers. Purposeful branding, source-of-ingredient story and ethical manufacturing are rising in consumer-driven messaging. Often the key differentiator in a highly fragmented and crowded marketplace, sustainability is a driver of consumers’ loyalty.”

A report from Packaged Facts, Rockville, Md., titled “The organic and clean label food shopper,” showed there is an overlap between consumers seeking organic or clean label products and an uptick in the popularity of plant-based proteins, which often are associated with sustainability.

Animal welfare and environmental concerns have become tenets of the clean label trend because plant-based vegan and vegetarian foods often are seen as cleaner than animal-based products even if not all of their ingredients are “clean,” according to the report. This is leading some consumers to reduce their consumption of animal-based products and switch to plant-based alternatives.

The Packaged Facts report added that although the products are not clean label due to ingredients such as “pea protein isolate,” they appeal to general consumers. Many of the products list several inputs on the front of the package that have clean connotations (pea protein, egg white and golden flaxseed), which instill trust in recognizable and healthy food to the general consumer.

Breaking down what is ‘clean’

On-pack claims and certifications continue to be indicators of healthy and nutritious food and beverages, according to the Kerry report. Along with rising consumer familiarity and awareness with clean label, the claims that signify clean label have progressed as well.

In 2017, Kerry’s research showed the top 5 clean label claims were “all natural/100% natural,” “non-G.M.O.,” “no additives or preservatives,” “organic” and “made with real ingredients.” In 2019, “all natural/100% natural” remained in the No. 1 slot followed by “made with real ingredients,” “no sugar added,” “organic” and “no additives or preservatives.” 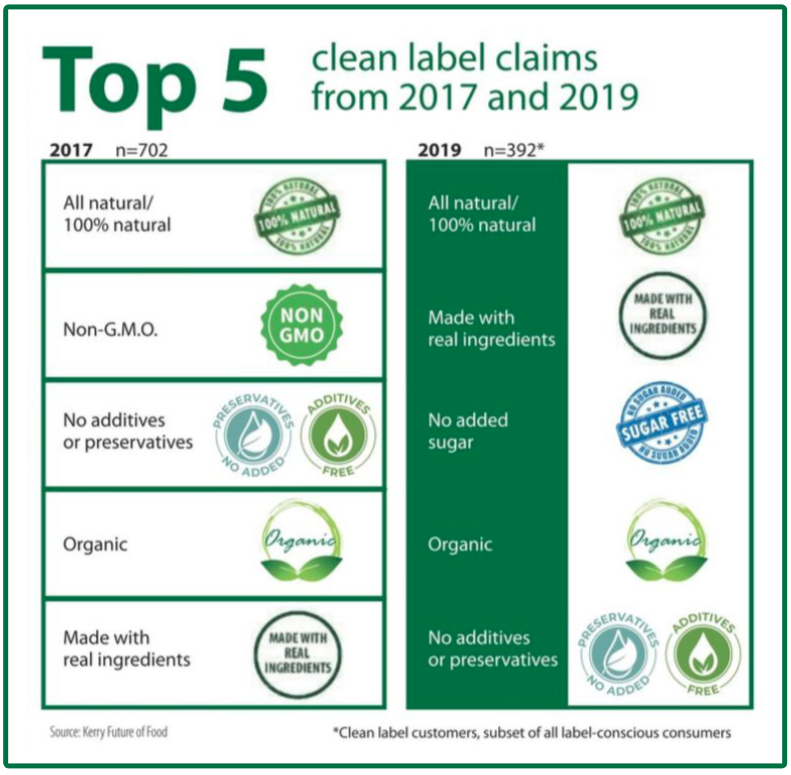 Ms. Nair added that there are key differences between how consumers from different generations perceive products that are clean label.

“The different generations of consumers interact with food and beverages differently, with different decision-making parameters and needs,” she said. “In the same breath, the key generations have vastly differing clean label definitions as well. The younger millennials (24 to 28 years of age) are more likely to lean toward product messages such as ‘made with real ingredients, ‘all natural/100% natural,’ ‘no added sugar,’ ‘organic’ and ‘no additives or preservatives.’

“While the older boomers (65+ years) are more likely to gravitate toward nutritionals and tangibles such as ‘no added sugar,’ ‘no added salt,’ ‘no artificial preservatives’ and ‘no additives or preservatives,’ a new addition to the boomers was their focus on ‘made with real’ as well.”

The HealthFocus International research identified several “pillars” that have become integral to clean eating, including health, safety and avoiding negatives, transparency and trust, and environmental. The health pillar comprises mental and emotional well-being, healthy weight, balanced diet and an active lifestyle. Safety is defined as actual product safety as well as avoiding artificial ingredients and chemicals in food.

“To the average consumer on the average day, at least in developed countries, they assume that their food is generally safe to eat, that they won’t have an immediate or adverse reaction to consuming something from the grocery store shelf,” Ms. Amos said. “While contaminated ingredients is still the top concern, and that’s logical, what concerns them more on a day-to-day level are what the growing or processing practices have done to their foods and beverages and how those manipulations could affect them in the long term.

“Things like G.M.O.s, growth hormones, pesticides, etc. are top concerns that are fueling the clean eating movement. Despite the potential benefits of processed foods, such as longer shelf life, convenience and fortification, only 16% of global shoppers believe processed foods and beverages can make a food and beverage safer, and nearly 30% think they may be contaminated through processing facilities and storage.”

Another part of the safety discussion focuses on how consumers decide what ingredients are clean and those that are not. The so-called “no-no” lists published by retail and food service chains have limited the tools product developers may use in formulations.

“At a very base level, to a consumer, a chemical is something that they don’t recognize or understand,” Ms. Amos said. “Consumers are bombarded with so much information related to health and nutrition these days, and the recommendations are constantly changing. For many consumers, the long ingredient lists with unrecognizable names are an easy signal that a product might be overly processed and not ‘clean.’ We are seeing a back-to-basics approach where shoppers want real, whole-food ingredients that they know and trust.”

HealthFocus International findings show that 67% of global shoppers believe it is important on a food ingredient label that most of the ingredients are things they recognize and would use at home, and nearly half think a food or beverage is more natural if there are fewer ingredients on the label.

Mr. Hansen of OSI Industries emphasized the challenge his team faces when he said, “There tends to be a list of ingredients that some clients do not want to be included as part of a product’s ingredient statement. This could include things like monosodium glutamate to high-fructose corn syrup to artificial anything. It can vary from client to client.”

Many ingredients have landed on the various “no-no” lists, and it’s worth asking if there is a chance the image of an ingredient may be rehabilitated. Ms. Nair said yes.

“Based on the consumer studies we have done in the recent past, stevia is one of those ingredients that consumers seem to have a more positive opinion of versus three to five years ago,” she said. “This probably is because of how they are listed on the ingredient label today, listed as ‘stevia leaf extracts’ on the label today.”

This past August, The NPD Group, Chicago, reported that a growing proactive health movement is driving consumers to treat food as a means to prevent, manage and possibly even reverse certain conditions. Data from Nielsen show approximately 80% of consumers have adopted a “food as medicine” approach to eating, and The NPD Group found a quarter of U.S. adults are trying to manage their health through food. In addition to seeking healthier and more natural foods, people increasingly are cutting out foods they think could have a detrimental effect on their long-term health.

“Today, there’s more of an expectation that each mealtime can be an opportunity to do something good for me,” said Darren Seifer, a food and beverage industry analyst for The NPD Group, when the report was released. “What we see is an increase in the number of people who are trying products to make themselves better in the long term.”

“Consumers need to rely on the entities that control the food supply, from the government to all levels of the supply chain: farmers, ingredient suppliers and of course manufacturers that tie it all together and create the product that sits on the shelf,” Ms. Amos said. “The big food and beverage companies tend to take on the brunt of the distrust due to the highest level of visibility.”

She added that many of the major companies are implementing initiatives that promote a higher level of care for products they produce, the process to produce them and taking steps toward sustainability for the world around them. The key will be getting the consumer to believe that they are doing it for altruistic reasons.

“In our 2019 USA trend study, we looked at shopper opinions regarding big brands versus small, niche brands, and we found that despite shoppers’ preference for buying well-known brands, big brands have some catching up to do,” she said.